Pulitzer Prize-winning journalists Bob Woodward and Carl Bernstein talked about the parallels between the political atmosphere in the 1970s and current day in a lecture at Hancher Auditorium on Wednesday. 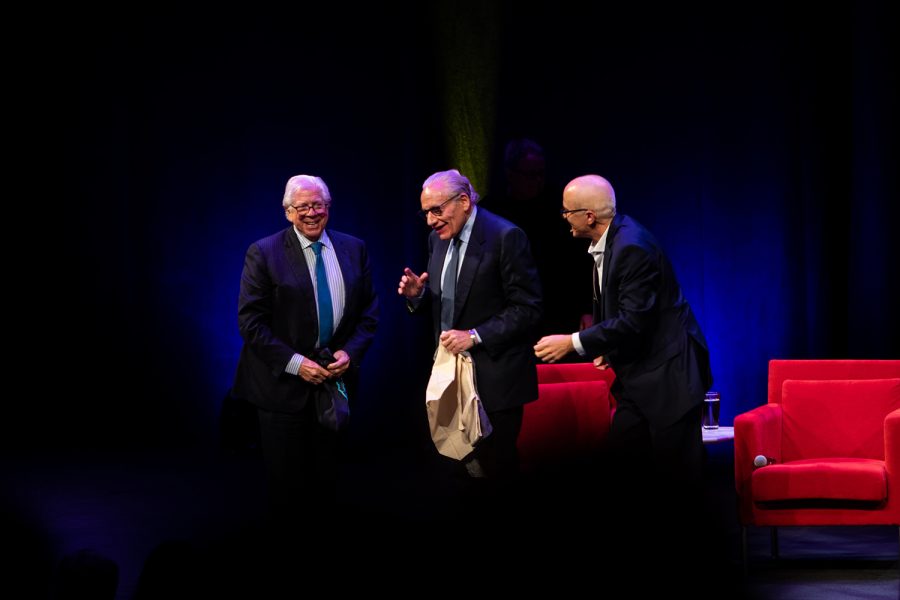 Pulitzer Prize journalists Bob Woodward and Carl Bernstein gave a lecture on the parallels between the political atmosphere in the 1970s and today in the University of Iowa Hancher Auditorium on Wednesday.

Woodward and Bernstein were met with roaring applause and a standing ovation following their first appearance at the UI.

Woodward and Bernstein are best known for breaking the Watergate Scandal at The Washington Post in 1972.

Watergate refers to a political scandal tied to former President Richard Nixon following burglaries at the Democratic National Committee during the 1972 presidential election.

Washburn commented on the demographic of the room, surveying that most audience members would have lived through the Watergate scandal. For those who experienced the scandal, it was surreal, Washburn said.

“For many of you, it is a pinch me, is this really happening, moment,” he said.

Woodward and Bernstein investigated the scandals involving the Nixon administration.

They talked to hundreds of administrative officials, campaign workers, and White House staffers in an attempt to uncover the Nixon administration’s involvement in the burglary.

The colleagues were not taken seriously in the early days of the Watergate break-in, Bernstein said.

“We started covering Watergate at 28 and 29-years-old. We were local reporters. Our colleagues in the national press corps were denigrating and didn’t believe what we were reporting in The Washington Post,” he said.

Their reporting led to the downward spiral of the Nixon administration that ultimately ended with his resignation.

The coverage of Watergate led to The Washington Post receiving a Pulitzer Prize and earned Woodward and Bernstein a book deal. They wrote about their investigation process in the book, ”All The President’s Men”, which put them on the bestseller list.

They followed this with the publication of their second book, “The Final Days”.

At the Hancher lecture, their main focus was on the parallels between the political climate in the 1970s during the Nixon presidency and Watergate scandal, and the Trump presidency controversies.

“The power of the presidency is even greater than the time that we were covering Watergate and I think we’ve seen that with Donald Trump. And now we’re talking about a president that is trying to find his way in how to exercise the powers of the president and having an awful lot of trouble doing that,” Woodward said.

During audience questions, a UI journalism student asked if objectivity in journalism still exists, to which Woodward answered the truth is not neutral.

“They are about context, they are about the best attainable version, they are not connecting the dots,” Woodward said. “…All we can do is describe [controversies]. And we in our business need to be very careful about what they can produce —severe judgment.”

Bernstein agreed objectivity would be the downfall of journalism.

“If we start thinking in journalism that the way we cover a story is to give 50 percent of what we’re writing about to one side, the 50 percent on the other side, [are] ideas manufactured by centrism. Then, we’re in big trouble,” he said.