The City of Iowa City and the UI have treated and removed affected ash tree populations for over 10 years after the infestation was identified. 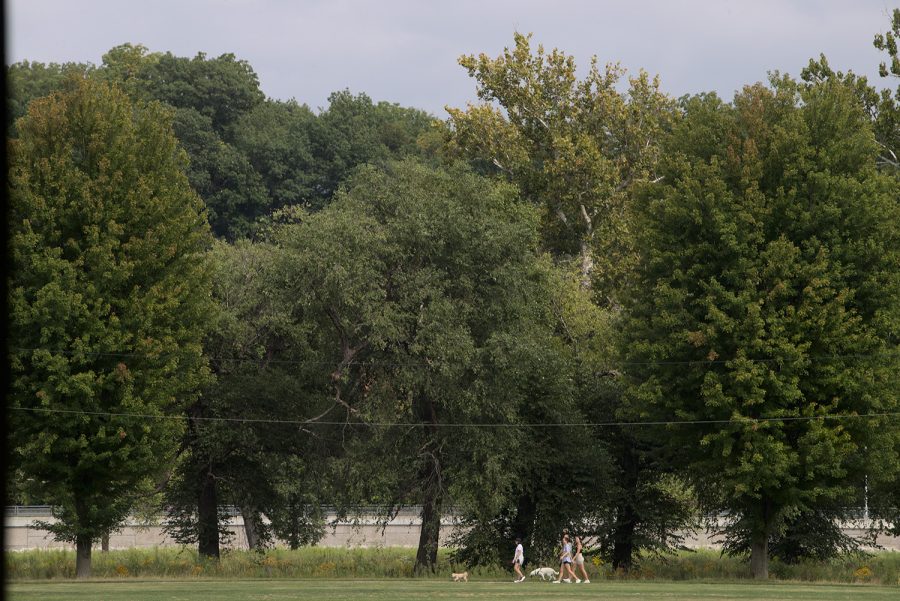 Ash trees in Iowa City continue to fall victim to the emerald ash borer beetle despite preventative treatment and removal efforts by arborists over the last decade.

The emerald ash borer is a small, green beetle native to East Asia. The invasive beetle was first discovered in the United States in 2002 and moved across the country because people unknowingly transported them on infected ash wood.

The beetle was identified in Iowa in 2010 and has been a problem for Iowa City ever since.

Iowa City Superintendent of Parks and Forestry Tyler Baird said the beetles’ larvae are to blame.

“The growing young chews through the outer layers of the tree, which is where all the water and nutrients uptake come from,” Baird said. “So, if you think of it like a straw, if you have a straw that has a hole in it, you’re not able to drink through it. The same thing happens with the tree. The straws, in a sense, are broken — they’re not able to do that nutrient exchange.”

“If there was any other damage or any indication that the tree was in some sort of decline, it was easier to remove the tree early on and then replace it with another tree of a different genus,” he said.

Homeowners with ash trees on their property decide between treating or removing the trees. Treatment can cost about $150, but it must be repeated every two years for the entire life span of the tree, and the treatment is not 100 percent effective.

Iowa City recommends residents remove their trees. Removal of an ash tree is expensive and costs around $2,000, Baird said.

The city gives discounts to people looking to replace trees because of expensive tree removal prices.

“The City of Iowa City also implemented a Roots for Trees program where, if the homeowner applies for the voucher, they can come in and buy a tree — fall or spring — for half off,” she said. “So, that has increased our sales, with the city trying to promote planting more trees.”

Baird said the emerald ash borer is not only an ecological risk, but also a physical risk to residents.

The emerald ash borer has a heavy presence at the University of Iowa. The university discovered the beetle on campus and created a five-year plan to remove the ash trees.

Andrew Dahl, UI campus arborist and urban forest supervisor, said the emerald ash borers are still destroying trees even as the plan wraps up this year.

“We started a five-year plan to get all the ash trees down; there were over 700 of them,” Dahl said. “We are almost complete with that project. There are about 40 left in outlying areas.”

The UI is using the removal of trees to replant the UI’s tree canopy with diverse tree types.

On Iowa City land, Baird said he recommends citizens choose an uncommon tree to replace the ash they lose.

“The more diversity we have in our tree canopy, both in public property and private property, the better off our urban forest is going to be, and it’s going to be more resilient to any other pests that come in,” he said.