Margaritas, good food, and glam are to be expected from a Hazel Sanchez-Belle drag brunch. Now 25, the blossoming star has grown Iowa City’s drag scene from nightclub performances to family-friendly brunches at Big Grove Brewery and beyond. 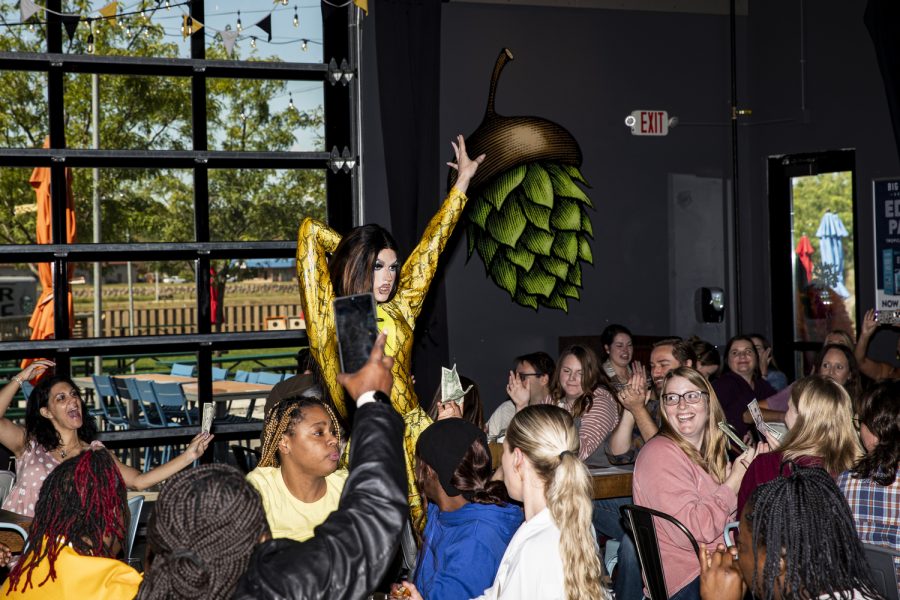 Hazel Sanchez-Belle performs during Big Grove Drag Brunch in Iowa City on Sunday, Sept. 11, 2022. Hazel said it’s important for children to be exposed to drag queens, and they are happy the brunch does that. “…it's exposing them to something that doesn't need to be hidden.”

Hazel Sanchez-Belle is an entrepreneur in 9-inch heels.

The drag queen danced competitively for 15 years before debuting on the drag scene. Since their debut, Sanchez-Belle took over the Iowa City drag scene with their partnership with Big Grove Brewery for a monthly regularly sold-out brunch show.

From Sanchez-Belle performances, their dance background is clear to audiences as they flawlessly execute a high kick into an axel turn in 6-to-9-inch heels. Sanchez-Belle’s style stands out — they love pink, and “the Barbie look.”

Two walls of their Iowa City bedroom are lined in wigs, some blonde or brunette, others vibrant blues and pinks; their closet boasts an array of colors, patterns, rhinestones, and cuts. On their windowsill sit three giant, twinkling crowns from previously won pageants.

After graduating high school, Sanchez-Belle started playing with makeup and explored titles like non-binary and genderfluid. They explain they started with everyday glam, which led to them falling in love with the art of makeup.

“Then I just added a name and created Hazel, and just put my background of dance and makeup skills together,” Sanchez-Belle said when detailing the evolution of their persona.

Hazel said makeup, and the art form surrounding it, proved effective in exploring their identity.

“I always think makeup can be any art form you want, to create. Your face is a naked canvas, and you’re painting your art on it,” Sanchez-Belle said. “So, if that’s creating some famous queen or finding your own schtick and doing whatever you want with your face, you can always change it up.”

“Seeing him in his 30s and 40s when I’m like eight, and he’s just this very flamboyant, very queer person. I was like, ‘Oh, it is acceptable,’” Sanchez-Belle said. “He’s living in my house; my mom is his friend — like ‘it’s okay.’”

Understanding firsthand the difference that positive exposure to the LGBTQ community can make for a young queer kid in Iowa, Sanchez-Belle strives to curate an environment at every brunch performance that is fun for all ages.

Now 25, Sanchez-Belle has already curated a remarkable legacy from the ground up, which began by seeking out advice from other drag queens they admired. Des Moines drag stars Tyona Diamond and Vana B were major influences for Sanchez-Belle.

From there, Sanchez-Belle emailed Big Grove Brewery a business pitch and sat down with them a few days later to work out an agreement. The recurring event began in April 2021 and is now so popular that it has spread to multiple Big Grove Brewery locations, most recently in Des Moines.

Now, Sanchez-Belle fully runs the event, as well as hosting several other drag brunches around Iowa City, most recently one at Alebreje Restaurant. Jack Streb works at Alebreje and hired Sanchez-Belle to host a brunch there.

“She has made herself a little business out of hosting brunches with a bunch of local restaurants. So, she’s just the obvious choice to pick,” Streb said.

Sanchez-Belle staffs and runs these events themself, selecting drag queens from the growing population in Iowa City to star in their shows.

Hazel looks back on their evolution as a drag queen modestly. They explained that this trait was drilled into her by her “drag grandmother,” Synitha DeMornay Sanchez, who humbled Sanchez for two hours once after overhearing Sanchez say a rude comment about a winning queen at a competition they were at together.

In drag culture, drag queens are often accepted into “families” of other drag queens who take it upon themselves to help the newcomers navigate and thrive in the drag scene.

Drag families are “literally like your chosen family,” Sanchez-Belle said. Furthermore, in Sanchez-Belle joining the Sanchez family, their grandmother wanted to ensure that they would do the Sanchez name justice by being a respectful and accepting competitor.

As Sanchez-Belle leads their own brunch, they ensure the drag queens that participate continue to curate an equally accepting environment.

Sanchez-Belle also stressed the emphasis they put on the drag brunches being family-friendly, with the hope that kids will be exposed to drag queens. They explained that despite growing up in an accepting household, cultural pressure “kept them in the closet.”

Erotica Divine, a fellow local drag queen, said Sanchez-Belle is “a very polished entertainer” who has used their platform to give other performers in the community a spotlight to show their talent.

“She has taken what she loves to do and shared her passion with a vast amount of people, not only spreading love, but pushing her fellow drag entertainers to push themselves to be the best versions of themselves,” Divine said. “I am not only proud but humbled to call her my sister.”