These six candidates are working to “get out the vote” in their districts to help support candidates for federal and state offices in competitive races. 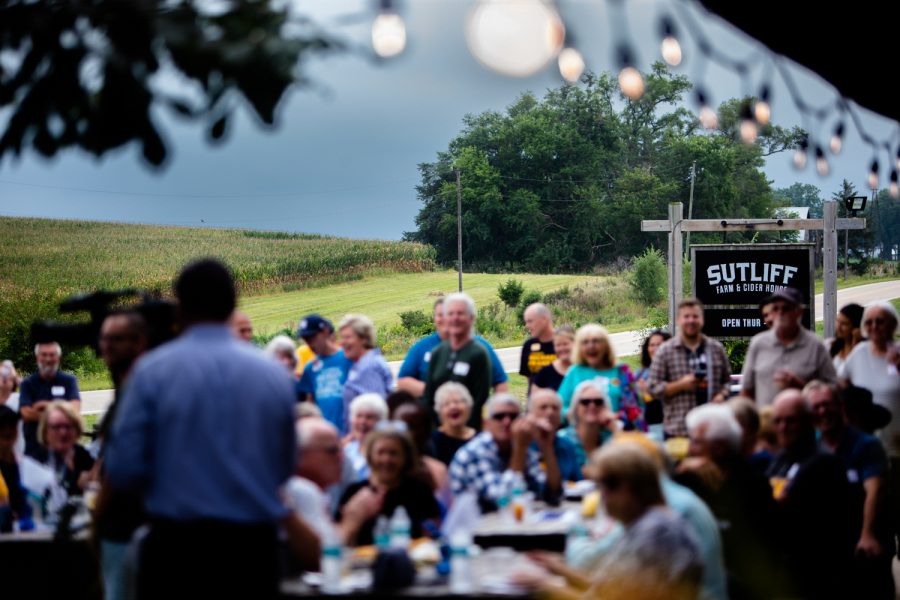 A sign is seen at a fundraising event for democratic candidates Liz Mathis and Christina Bohannan while democratic candidate for the U.S. Senate Mike Franken speaks at the Sutliff Farm & Cider House in Lisbon, Iowa. Franken is running against incumbent U.S. Senator Chuck Grassley, who is currently serving his seventh term in the Senate. "The wage scale in many communities has stayed flat for 30 years," Franken said. "I want [Iowa] to be the place where the 18-year-olds and the 27-year-olds at least consider staying."

Six Johnson County candidates are running unopposed on the ballot in November, all of them Democrats. The candidates are working to help Democrats running for federal and state offices in their district to “get out the vote” for candidates in highly competitive districts in their spare time.

The six candidates are among 45 – 20 Democrat and 25 Republican – across the state running unopposed, according to The Cedar Rapids Gazette.

The deadline for new candidates to file for the general election ended on Aug. 31. Candidates are now in the final stretch with the midterm only a few months away.

Since Iowa’s redistricting after the 2020 census, this fall is the first election with newly drawn districts. With new territory under their belt, many candidates are taking their time to get to know their constituents.

The candidates running unopposed in Johnson County include:

One of the uncontested candidates, state Rep. Dave Jacoby, D-Coralville, meets with his constituents via door knocking and introducing himself to his new constituents in newly drawn House District 86, which encompasses all of Coralville and some rural areas around Coralville.

“Some [voters] may not know [the new district lines] until they walk into the voting booth,” Jacoby said.

Rachel Zimmermann Smith, D-Iowa City, is a candidate for Johnson County Attorney who has been knocking on doors even though she is also unopposed.

“I’m getting out to neighborhoods. I’ve been knocking on doors. I’ll talk to whoever,” Zimmermann Smith said. “I want to talk about what our office does. A lot of people don’t understand all the duties of the county attorney, we do a lot more than just prosecute crimes. So, I’ve been really just trying to get out and engage with the community in a lot of different ways.”
Democrats campaign for other candidates in lieu of competition in their home district
Jacoby also said he is busy canvassing in his own district and other districts to help Democrats, like gubernatorial candidate Deidre DeJear, get elected to gain a majority control over state government to help enact policies for his party.

“I am very busy, because politics is home,” Jacoby said. “But politics is also helping other candidates out in other Iowa districts so that we get more Democrats elected to stop some of these crazy culture war fights that the Republicans and Reynolds are bringing to the State House.”

Adam Zabner, D-Iowa City, is the only candidate in House District 90 which consists of downtown Iowa City including the University of Iowa, said he wants to make sure voter turnout in his district is as high as possible so that candidates in federal offices have a better chance of winning their highly competitive races.

Zabner is currently running in Rep. Christina Bohannan’s old district, which was vacated by Bohannan to run for congress in Iowa’s 1st Congressional District.

“You know, even if my race isn’t contested, there’s a lot of really, really important things on the ballot this midterm, and I want to be a part of making sure my district turns out big time,” Zabner said.

RELATED: Democrats look to leverage voter engagement for midterm elections
Why are there so many unopposed candidates this election cycle?
Teresa Horton Bumgarner, the Johnson County GOP chair, said Republicans have had more candidates running in Johnson County this midterm than in previous years.

“We’re seeing a big uptick in excitement,” Horton Bumgarner said. “We’re seeing people who are committed, and some want to have their voice heard.”

Republicans are outnumbered in Johnson County, a mainly liberal county with most of the county encompassing Iowa City and its suburbs.

In fact, Republican candidates for Johnson County increased since the 2020 election where only three Republicans ran in legislative races, according to the Johnson County Auditor’s website.

Seven Republican candidates are slated to run in the Nov. 8 general election — the most candidates running in Johnson County since 1992.

Horton Bumgarner said it’s good for society to have opposing views to help the free flow of ideas and discourse.

“When you have opposing candidates, it causes messages to be heard by people that actually make people think,” Horton Bumgarner. “And I think that when you don’t have an opposing view, that’s one of the indicators of the breakdown of society.”