Iowan bassist Christine Moad, known by their stage name Miss Christine, is on tour across Iowa, sharing their journey as a musician and non-binary activist. 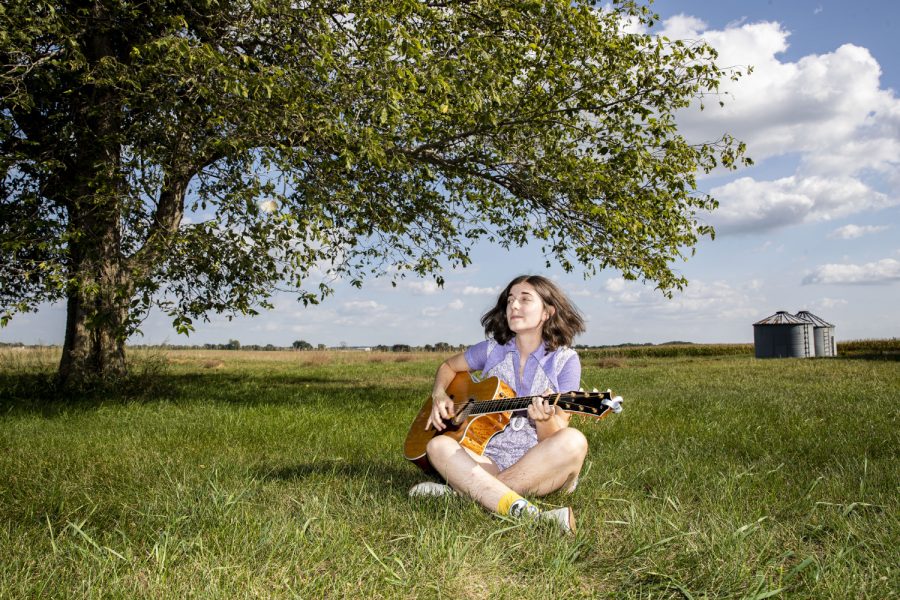 Christine Moad, a bassist and singer-songwriter who records under the name Miss Christine, poses for a portrait at their home in Nichols, Iowa, on Wednesday, Sept. 7, 2022. Moad, 30, has been performing since they were 12, and has released 25 songs. Inspired by their own genderqueer identity, their favorite song they released, “Truth in Song,” explores identity. “As a genderqueer person, it was really important for me to write a song that mentions trans lives and the issues that they face,” Moad said. “And to me, that's what that song does.”

From North Dakota, to Florida, to places like Budapest, they aim to excite the crowd with their vibrant sound. Now touring the state of Iowa, Moad continues to share their musical talents for new and old music lovers.

It all started at 12-years old when their middle school band teacher needed a bassist. He asked Moad if they would be interested in the bass guitar, which is where they discovered their passion for the instrument.

In 2003, the movie School of Rock came out, and Christine fell in love with it, inspiring them to start their first band, “Hybrid.” Motivated by the talents of notable bassists like Paul McCartney, Moad improved their bass playing skills and gained popularity through their solo tours, eventually releasing two EPs and two full albums, with one to be released next year.

Their music video for their song “Google University” was released last week, and is now available on their YouTube channel, “Miss Christine Music.”

After graduating from Berklee College of Music in Boston, Moad was invited to join a band in Nashville, but they were unfamiliar with the music culture there. For instance, while performing in Arkansas with an audience of over 1000 people they were to play with a band whose discography was unfamiliar to them. Nevertheless, Moad was able to put on a show, finding that they can adapt to an array of musical categories.

RELATED: Rocking out at the Stanley Museum of Art

However, when the COVID-19 pandemic began, Christine’s live public appearances were not spared. During that unprecedented period of time, Christine entered a new realm of reflection, and experimented with the deeper meanings behind their songs.

Moad noted their activism in normalizing non-binary genders — by displaying their large purple pin bearing “They/them,” it shows they are proud to be who they are and want their message to be heard.

“It’s just all about all of the issues that are really important to me and that I fight for through my actions and music to make the world a better place,” Moad said. “It uplifts marginalized voices.”

Their music and lyrics have touched their audience, Moad said. It confirms their intentions are met, having their fans know that being non-binary is acceptable, and they are not alone in the world.

“I can just tell from my experience, I’ve had trans and non-binary people come up to me and thank me for what I do and being visible as it makes them feel less alone,” Moad said.

Moad emphasized they also exist outside of just playing the bass, and that they would advise their younger self to remember that.

“We are valid and worthy of existing, outside of playing bass,” Moad said. “We are so much more than what we do.”