Looking towards the midterm elections, both Democrats and Republicans wonder if young voter turnout will be affected by policies like the student loan forgiveness plan and the overturning of Roe v. Wade. 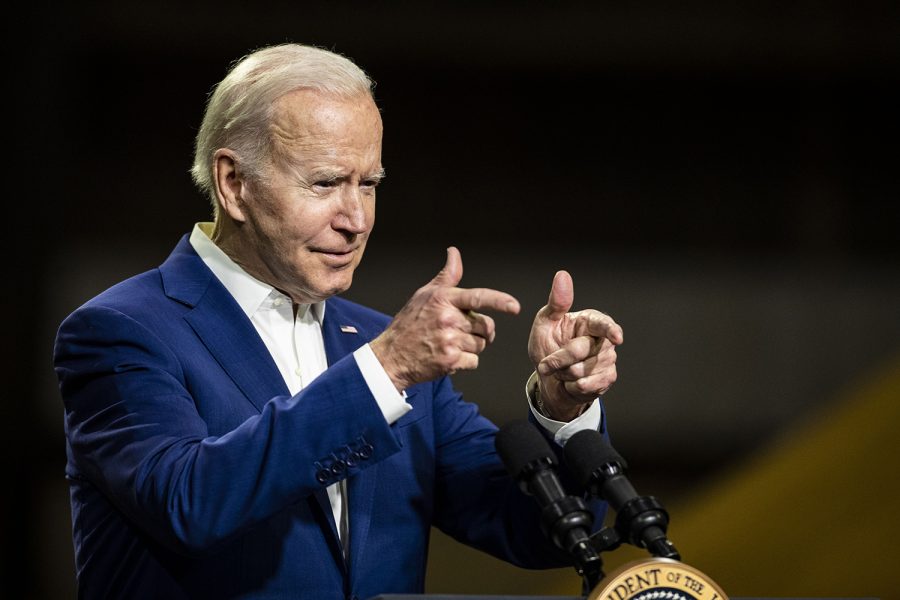 President Joe Biden speaks during his visit at the POET Bioprocessing ethanol plant in Menlo, Iowa, on Tuesday, April 12, 2022.

Both the Republican and Democratic parties are preparing for higher voter turnout among young for the November midterm election.

The unveiling of the Biden-Harris Administration Student Debt Relief Plan on Aug. 24 turns attention to young voters and how the plan will affect the midterm election results. Experts say it is a waiting game.

The plan will forgive up to $20,000 in debt and extend the pause on student loan repayment until the end of 2022. President Joe Biden unveiled the plan last month after much anticipation by Democrats.

“I know a lot of people were hoping for complete loan forgiveness, but with what we’re working with right now, I think this is a very good step in the right direction,” Nikša Poleksić, president of University Democrats at Iowa said.

Timothy Hagle, a UI political science associate professor, wrote in an email to The Daily Iowan that Republicans are anticipated to do well in the midterms because Democrats are in the White House.

“Regardless of anything else, the political expectation is that reducing student debt would benefit Democrats more than Republicans,” Hagle wrote.

Hagle thinks a red wave in the midterms might happen because many people believe the increase in gas prices and inflation is caused by a democratic majority. Regardless, Democrats have looked for issues to motivate their voter base.

“The problem for Democrats, however, is that the plan has generated a fair amount of opposition and could end up motivating a lot of people to vote for Republicans,” Hagle wrote. “That could include younger voters who did not have such debt or paid it off already.”

Hagle said the effect of the student loan plan won’t be seen until after the midterm election results come out.

“The bottom line is that we probably have to wait to see what happens between now and election day to get a real sense of what effect the proposed plan had, if any,” Hagle said.

Courtney Juelich, a political science professor at the University of Wisconsin-Stout, said young Iowa voters are unique because they are concentrated in college towns like Cedar Rapids, Iowa City, and Des Moines.

Juelich said the student loan forgiveness plan is unique because it might show students the government cares about the futures of young adults and the issues important to them.

The current student loan plan, Juelich theorizes, will not increase voter turnout, but may keep it from decreasing.

Poleksić said he hopes the student forgiveness plan will show students how politics affects their everyday lives and motivate them to pay more attention to politics.

“I think this is an action that will help open the eyes of those people, and they’ll hopefully be able to see that voting does matter,” Poleksić said.

“I hope, specifically with a student population, that this is sort of an action that caters towards them, that people will realize how important it is to have the right officials in office,” Poleksić said.

Poleksić said he thinks both Democratic and Republican voters favor the proposal to wipe out some student loan debt.

“Many people on both sides of the aisle have student loans. And I hope in the long run it affects voter turnout more than anything,” Poleksić said. “A lot of people see this as an executive action that affects them directly, and that’s something that people generally love seeing.”

Ed Cranston, Johnson County Democrats chair, said since the last election cycle in 2020, he has seen more young people get involved in politics — specifically on campus. Poleksić said the University Democrats club has registered 500 students to vote so far in the 2022 election cycle.

“As far as registrations that are happening, now that students are on campus. And really overwhelming numbers,” Cranston said.

“I think that the young people seem to be more interested in politics, and I see more young people now being more conservative,” Horton Bumgarner said.

In addition to the student loan forgiveness plan, Cranston believes other topics like reproductive rights and the climate crisis are policies young people care about.

“You look at the issues that students care about — those are the things that are being addressed by the Democrats,” Cranston said.

“It’s not that people don’t care about student loans, it’s more that if you forgive the loan, you’re only affecting a small number of people,” Horton Bumgarner said.

“If there’s an issue with how these people got into this situation, then the system needs to be looked at.”

Horton Bumgarner said to fix the student debt problem, the entire system needs to be fixed.

“Instead of putting a band-aid on the problem and passing the puck, we should be giving students and their families a clear picture upfront about the true costs associated with their education,” Sen. Joni Ernst tweeted following Biden’s announcement of his plan.

Rep. Mariannette Miller-Meeks, R-IA, wrote in a statement following Biden’s announcement, that the student loan forgiveness plan is an irresponsible plan. Miller-Meeks calls the plan a debt transfer to citizens who did attend college to those who didn’t.

“It’s unfair and undercuts students who work to afford tuition and parents who for years sacrificed and saved for the opportunity of a college education,” Miller-Meeks wrote. “Student loans shouldn’t be viewed any differently than a mortgage or car loan — money taken out must be paid back by those who benefit.”

Hagle said he has seen some people question whether the president has the power to cancel student loans.

A main concern Republicans are voicing is how the debt will be canceled and whether there will there be an increase in taxes or if money will be taken out of a federal program, Horton Bumgarner said. Cranston said he doesn’t know how the plan will be executed.

Hagle said Democrats will probably see more benefits from the student loan forgiveness plan. Cranston disagrees, saying the plan will help any student with a loan, regardless of their political affiliation.

“We’re not looking at it as we’re doing this just for votes. We’re doing it because it’s the right thing to do,” Cranston said. “And people and students are struggling, and they will continue to struggle. And then it really helps the entire economy.”

Horton Bumgarner said Congress should have looked over the student loan program years ago to fix the number of students who have debt.

“I think that if we looked at the whole system, we can maybe fix it for the next group and do something really positive with our situation so that we don’t have students who are graduating with tons of debt that they can’t pay back,” Horton Bumgarner said.