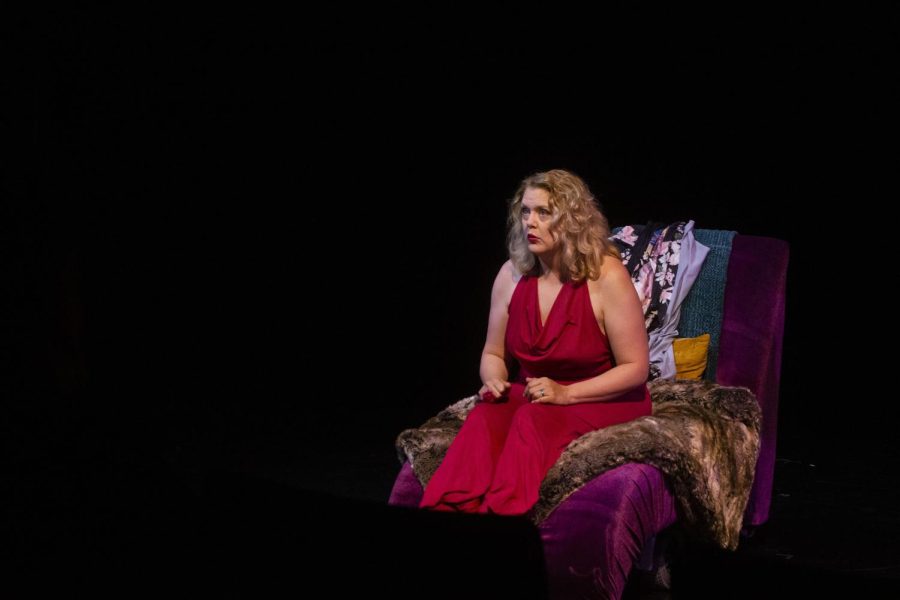 As patrons slipped into the theatre tucked inside the pedestrian mall, excitement for the beginning of the Riverside Theatre season buzzed throughout the audience. The room was relatively full with an audience that sat mere few feet away from the lone prop that adorned the stage — a seat with a blanket and pillow.

The set was simple, with the backdrop featuring a projection with the word ‘Chipmunk’d’ edited over a red heart emoji. When the doors shut and the lights were dimmed, anticipation for the performance was high.

Chipmunk’d is the first show in Riverside Theatre’s 2022-23 season. Written and performed by Megan Gogerty and directed by Saffron Henke, the play will run until Oct. 2.

At the beginning of the show, lights lifted to reveal Gogerty, playing a character that is also named Megan Gogerty. Adorned in a robe and jumpsuit and draped across the only prop, the first line that Gogerty spills was certainly an attention-grabber: “I want you to imagine my hot, sweaty body.”

From there, the show only got more absurd.

Chipmunk’d follows the story of Gogerty as she gets bit by a chipmunk. From her first encounter with the small rodent, the audience was taken on a whirlwind of adventures showing one summer where everything goes wrong for the main character.

One of the most enjoyable elements of Chipmunk’d is how natural everything felt. From Gogerty’s subtle facial expressions to the text messages that the audience got to see projected, regardless of how absurd the situation is, it felt realistic and plausible. As a member of the audience, the show seemed like a conversation between friends, recounting a wild story.

As an actress, Gogerty is able to have enough energy to supplement an entire cast. From the second she spoke, the audience burst into laughter, and kept that energy up for the entire 80-minute duration of the play.

While Chipmunk’d is a one-person show, Gogerty is not the only character. Through text messages projected onto the set and audio recordings playing throughout the piece, the audience is introduced to a plethora of characters.

Chris, Gogerty’s husband, is one of the most notable. Despite the fact that Chipmunk’d is a comedy, there are several moments in which emotions ran high, and the dialogue had the audience filled with existential dread.

To balance the terror and fear with something more positive, Chris as a character brought a lighter edge to the negativity. The audience might not ever see the character, but from the audio, text messages, and mere way that Gogerty describes him, viewers know that Chris is kind and good.

Throughout the entirety of the play, it was the unique descriptions that made for an entertaining night. Thematically, the show used a great deal of mature, “dirty” humor. However, the jokes are not funny because they are addressing typically censored topics — rather the eye-catching descriptors are so creative and vivid that the audience cannot help but laugh.

As humorous as the show is, it would be a disservice to brush over the raw, emotional writing of the play. When the main character was hit with challenge after challenge, she questioned what it meant to be good and bad, asking why good things happen to bad people and why bad things happen to good people.

These questions have merit, but there is no answer to them. Yet, thanks to the balance that Chris provides, the ending of their story was more than satisfactory.

In its final moments, Chipmunk’d drew upon everything that made it so great — nuanced characters, hilarious jokes, sentimental pieces, and human connection. With the premise of the plot surrounding a woman who gets bit by a small rodent, Chipmunk’d managed to leave the audience pondering rather profound ideas.