The Hawkeyes will battle the Cyclones at 3:05 p.m. on Big Ten Network. 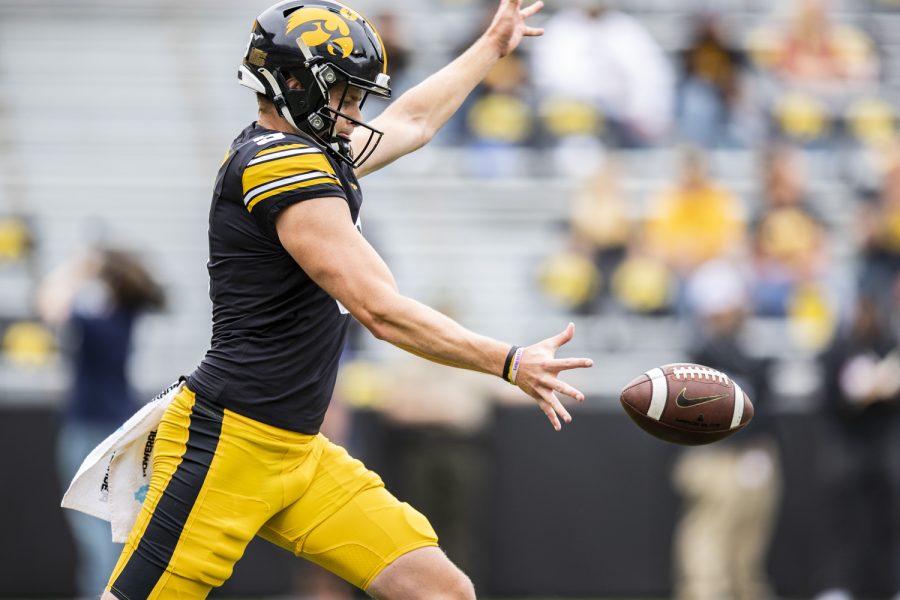 Iowa punter Tory Taylor warms up before a football game between Iowa and Iowa State at Kinnick Stadium in Iowa City on Saturday, Sept. 10, 2022.

Iowa and Iowa State are set to battle in the first Cy-Hawk rivalry game at Kinnick Stadium since 2018. The Hawkeyes and Cyclones will kick off at 3:05 Saturday and the contest will air on Big Ten Network.

Dekkers played significant time in last season’s Cy-Hawk game, completing 11-16 passes for 114 yards and a touchdown. The redshirt sophomore was impressive in his first college start last week. He went 25-31 through the air and threw for 293 yards, four touchdowns, and one interception.

Meanwhile, Iowa’s offense, without two scholarship wideouts and its staring running back, was underwhelming last Saturday against SDSU.

Petras threw for just 109 yards and one interception on 11-25 passing. Iowa added just 57 yards on the ground and failed to score a touchdown.

Those same wide receivers that missed Iowa’s season-opener — sophomore Keagan Johnson and senior Nico Ragaini will be out again this afternoon, though Gavin Williams may return in the offensive backfield as he will reportedly be a game-time decision.

Iowa’s defense, which scored two safeties a week ago,  will be missing a key piece as well. Linebacker Jestin Jacobs sustained an injury against South Dakota State and will be sidelined this afternoon as will cornerback Jermari Harris.

COIN TOSS: Iowa won the toss, deferred, and will kick toward the north end zone.

13:02 1Q | After a 3-and-out, T.J. Hall blocked the Cyclone punt. Iowa has it at the Iowa State 16.
12:21 1Q |LeShon Williams scores Iowa’s first touchdown of the year. He carried the ball on both of Iowa’s offensive plays and scampered across the goal line from 9 yards out. 7-0, Iowa.
9:52 1Q | After a single first down, Quinn Schulte made a big third-down tackle and ISU punted it back to the Hawkeyes. Iowa will take over at its own 19.
7:55 1Q | Iowa picked up one first down but had to punt. Taylor unleashed a 50-yard punt and Terry Roberts made the tackle for a loss of one on the return. Iowa State will begin its drive at its own 15.
4:29 1Q | Iowa State drove it into Iowa territory but its drive stalled at the 47-yard-line. After a touchback on the punt, Iowa will start at its 20.
0:33 1Q | Petras had the ball taken out of his hand in the throwing motion. Iowa State will take over from the Iowa 49.

END 1Q | Iowa State is driving and is on the Iowa 27-yard-line. The Cyclones forced a Spencer Petras fumble with 33 seconds remaining in the quarter and have moved the ball 22 yards since then. 7-0, Iowa.
12:17 2Q | Iowa DB Kaevon Merriweather forced an Iowa State fumble at the Iowa one-yard-line. Iowa’s Logan Klempt recovered the fumble in the end zone and Iowa will take over at its own 20. 7-0, Iowa.
8:51 2Q | Iowa drove it to its own 46 but had to punt. Taylor’s book bounded into the end zone. Iowa State will begin its next drive at its 20. 7-0, Hawkeyes.
3:45 2Q | ISU caps off a 76-yard, 14-play drive with a Jace Gilbert 22-yard field goal. Iowa’s defense held tough on three Cyclones tres from inside the five-yard-line. 7-3, Iowa.
2:37 2Q | Iowa goes 3-and-out and ISU will take over at its 27.
1:53 2Q | ISU goes 3-and-out and Iowa will begin at its own 16. Merriweather nearly came up with a diving interception on Iowa State’s third down play.
1:33 2Q | Petras throws an Interception and ISU regains possession on the Iowa 12.
0:57 2Q | Two plays after the ISU interception, Cooper DeJean returns the favor. He picks off Hunter Dekker in the end zone. Petras kneels down to end the half. 7-3, Iowa.
HALFTIME | Iowa leads, 7-3, after the Hawkeyes forced two Cyclone turnovers in the Iowa endzone. ISU has outgained Iowa, 180-86 in the first 30 minutes.

11:11 3Q | Senior cornerback Terry Roberts picks off Hunter Dekkers — his second interception of the day. Iowa will take over on its own 49-yard line.

7:51 3Q | Iowa forces a 3-and-out and Iowa blocks another punt. Lukas Van Ness blocks his second boot of the day. The Hawkeyes take over from the ISU 20.

5:16 3Q | Monte Pottebaum fumbles on the goal line and ISU takes over on its own 1-yard-line. The play comes two snaps after Arland Bruce slipped and fell with nobody between him and the end zone. This is the third turnover of the game inside the 1-yard-line or in the end zone.

END 3Q | ISU has driven to its own 43 and has a first-and-10 play to begin the fourth. Beginning at their own 1, ISU has converted three third downs on the nine-play drive.