The Cyclones took down the Hawkeyes for the first time since 2014. 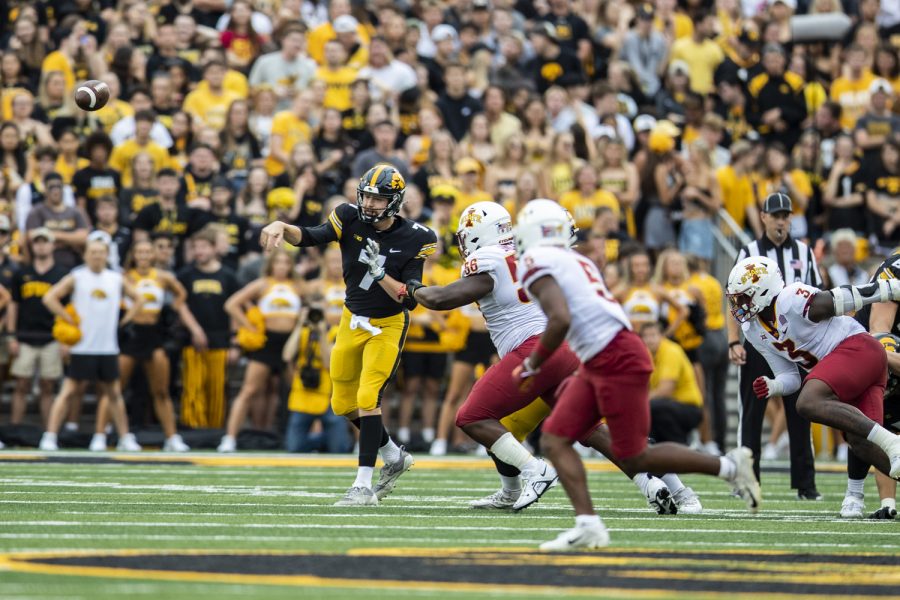 Iowa quarterback Spencer Petras throws a pass during a football game between Iowa and Iowa State at Kinnick Stadium in Iowa City on Saturday, Sept. 10, 2022.

After eight years, the Cy-Hawk football game trophy belongs to the Cyclones. Iowa State took down Iowa, 10-7, for the first time since 2014.

Iowa scored a touchdown in its opening drive at Kinnick Stadium — and it proved to be the only time the Hawkeyes would find the end zone all day.

The Cyclones kicked a field goal in the second quarter to cut their deficit to four points.

Iowa State took 11:49 off the clock in its go-ahead touchdown in the fourth quarter, aided by a 15-yard unnecessary roughness penalty on the Iowa defense.

The Cyclones started on the Hawkeyes’ 1-yard line and marched their way down the field. Iowa State wide receiver Xavier Hutchinson, who tormented the Hawkeye secondary all day, scored the Cyclones’ winning touchdown.

“You’ve got to keep playing,” head coach Kirk Ferentz said. “We had them on the 1, we could’ve made them punt again and get the ball back and who knows, but credit to them. They they responded when they had to, and that’s that’s what it takes to win football games.”

Iowa got to the 30-yard line with five seconds left in the game, but kicker Aaron Blom missed the potential game-tying field goal in pouring rain to seal the loss.

Iowa’s offense continued to struggle, as Hawkeye quarterback Spencer Petras has thrown one touchdown and nine interceptions in his past nine games.

The Hawkeye offense generated just 150 yards of total offense — 16 yards less than its 166-yard performance against South Dakota State on Sept. 3. Iowa State, on the other hand, had 313 total yards.

Iowa is now 1-1 on the season going into its matchup against Nevada next week.

Neither Iowa nor Iowa State could take care of the ball at Kinnick Stadium on Saturday afternoon.

The Hawkeyes and Cyclones combined for eight turnovers throughout the game — four in the first half.

Petras fumbled the ball on a sack near the end of the first quarter. On the next drive, Iowa State running back Jirehl Brock fumbled the ball at the goal line, which was forced by safety Kaevon Merriweather.

Near the end of the second quarter, Petras and Cyclone QB Hunter Dekkers threw interceptions on two consecutive drives.

Petras was intercepted at Iowa’s 25-yard line by Colby Reeder, which he returned to the Hawkeyes’ 12-yard line. Then, Hawkeye cash Cooper DeJean intercepted a ball from Dekkers in the end zone.

Dekkers threw another interception in the Cyclones’ first drive in the second half, which was picked by Hawkeye cornerback Terry Roberts.

The game saw its sixth turnover with about five minutes left in the third quarter, as Hawkeye fullback Monte Pottebaum fumbled the ball on a fullback dive at the goal line.

While the play was called a fumble, Iowa thought that Pottebaum crossed the line for a touchdown.

“That’s huge,” Ferentz said. “It’s just huge to get a touchdown there, it changes the complexion of the game — touchdown for us,  but you got to live with what we got.”

Both Iowa and Iowa State turned the ball over on downs at the 2:18 and 0:38 mark of the fourth quarter, respectively.

Iowa scored on its first drive of the game — which started on Iowa State’s 16-yard line.

The Cyclones went 3-and-out in its first drive, and the punt by Tyler Perkins was blocked by defensive lineman Lukas Van Ness.

Van Ness tied a single-game Iowa record when he blocked his second punt in the third quarter on Saturday. The Hawkeyes didn’t capitalize on their positioning at Iowa State’s 20-yard line after the second blocked punt, as Pottebaum fumbled the ball at the goal line.

“Coach Woods dialed that up all week,” Van Ness said. “We noticed that that they had their two guys in the shield, which is the guys that protect the punter, offset off the line a little bit. So, they had me line up to get a straight shot on the route, and I was able to get my hand out there and block a couple punts.”

Van Ness also contributed a tackle for loss at the end of the third quarter.

Starting wide receiver Keagan Johnson didn’t take the field for the Cy-Hawk series, extending his time out of the game. He hasn’t played in a game since the Big Ten Championship against Michigan on Dec. 4, 2021.

“For the first time, I can say that he’s improved this past week and maybe gave us a little room for optimism,” Ferentz said of Johnson. “I think Nico’s getting close as well, we will know more as the week goes on. So, you know, those two guys are definitely possibilities.”

Sophomore running back Gavin Williams, who missed the Hawkeyes’ season-opener against SDSU on Sept. 3, was limited on Saturday. He had two carries for 10 yards. Iowa linebacker Jestin Jacobs, who was injured on Sept. 3, didn’t play on Saturday. Cornerback Jermari Harris also didn’t play. Ferentz did not provide updates on Jacobs or Harris’ injuries postgame.