In Iowa football’s 10-7 loss to Iowa State, the Hawkeyes had four turnovers and just 150 yards. 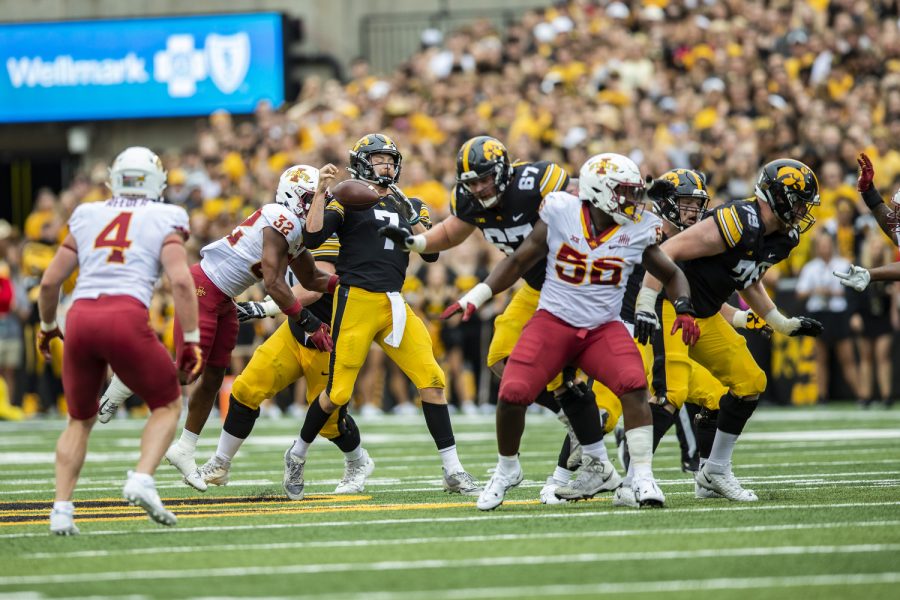 Iowa quarterback Spencer Petras loses possession of the ball during a football game between Iowa and Iowa State at Kinnick Stadium in Iowa City on Saturday, Sept. 10, 2022. The Cyclones ended a six-game Cy-Hawk series losing streak and defeated the Hawkeyes, 10-7. Iowa had three turnovers.

“We’ve all got to get better,” Ferentz said after Iowa’s touchdown-less victory last week. “That’s the bottom line. [Spencer Petras will] get better as we get better as a team. That’s really where our focus will be. It is every time. You go to Week 2, hopefully you make a big jump.”

Instead of making the jump Ferentz wanted, Iowa’s offense got worse.

On Sept. 3, Iowa generated 166 yards of total offense against the Jackrabbits. On Saturday, the Hawkeyes gained 150 yards against Iowa State in a 10-7 loss.

Iowa scored its first and only touchdown of the game on its opening drive — and the Hawkeyes only had to go 16 yards.

“We noticed that Iowa State had their two guys in the shield, which is the guys that protect the punter, offset off the line a little bit,” Van Ness said. “So, they had me line up in a straight shot to run up the route and get my hand out there and block a couple punts. So, obviously I was able to get there a couple times, but again, it wasn’t enough.”

Following the touchdown, everything went downhill for the Hawkeye offense.

The defense tried to keep Iowa in the game, as Van Ness blocked another punt in the third quarter and allowed just one touchdown. But it wasn’t enough — the Cyclones walked out of Kinnick Stadium with the Cy-Hawk trophy for the first time since 2014.

Ferentz, who is a big proponent of complementary football, isn’t pleased with Iowa’s offensive production.

“Part of complementary football is the other people helping out when one unit is not going well.” Ferentz said. “But we’re going to have to move the ball offensively. We’re not going to sit around waiting on special teams and defense to win every game for us. We can’t do that. That’s not realistic.”

Iowa’s offense had four total turnovers on Saturday afternoon. After Van Ness’ second blocked punt, fullback Monte Pottebaum fumbled the ball at the goal line — although Ferentz thought he crossed the line before the fumble.

The Hawkeyes also turned the ball over on downs with 30 seconds remaining in the game, as sophomore wide receiver Arland Bruce missed a pass from Iowa quarterback Spencer Petras in pouring rain.

To close out the downpour, kicker Aaron Blom missed a last-second field goal that could’ve tied the game.

Petras directly caused two turnovers in the first half. He fumbled the ball in the first quarter and threw an interception late in the second period.

“Off the top of my head, I can think of probably three or four plays that were on me,” Petras said postgame. “I’m sure there’s gonna be more once I’ve looked at the tape, you never really know though. You know, it’s one of those things … [our problem is] just consistent execution.”

Despite pleas from fans on Twitter and at Kinnick Stadium to put backup QB Alex Padilla in the game, Ferentz stayed committed to Petras throughout all four quarters.

When asked directly, however, Ferentz did not say Petras would start Week 3 against Nevada on Sept. 17 at Kinnick Stadium.

“To me, both these games he’s still not getting enough help to really do a fair assessment,” Ferentz said. “He hasn’t been perfect. Nobody has. We have a lot of moving parts right now on offense, and then we’re shorthanded a little bit at a couple positions. We’ll keep working through it.”

Dating back to 2021, Petras has one passing touchdown and nine interceptions in his last eight games. His last touchdown pass was against Kentucky on Jan. 1. In three starts when Petras was injured in 2021, Padilla accumulated two touchdown passes and one interception. Padilla threw both of his touchdowns against Minnesota on Nov. 13, 2021.

While Petras and the Hawkeyes’ offense have struggled in their first two games of 2022, Ferentz said he isn’t ready to make any “wholesale changes” just yet.

“The best way I can phrase it is we have a lot more exposure to what’s going on with our players on a daily basis,” Ferentz said. “You get to see them on Saturdays, obviously you get to interview them, talk to them and all that, but we see them on a daily basis, and this goes back to the spring and last fall, as well.

“It has been our estimation that Spencer is the starter, and wanted to give him that chance again today. We’re sitting here right now, clearly we have to do better, and we’ll reassess everything this week.”