The 7-year-old is ready to cheer on the Hawkeyes as the second Kid Captain of the 2022 season. 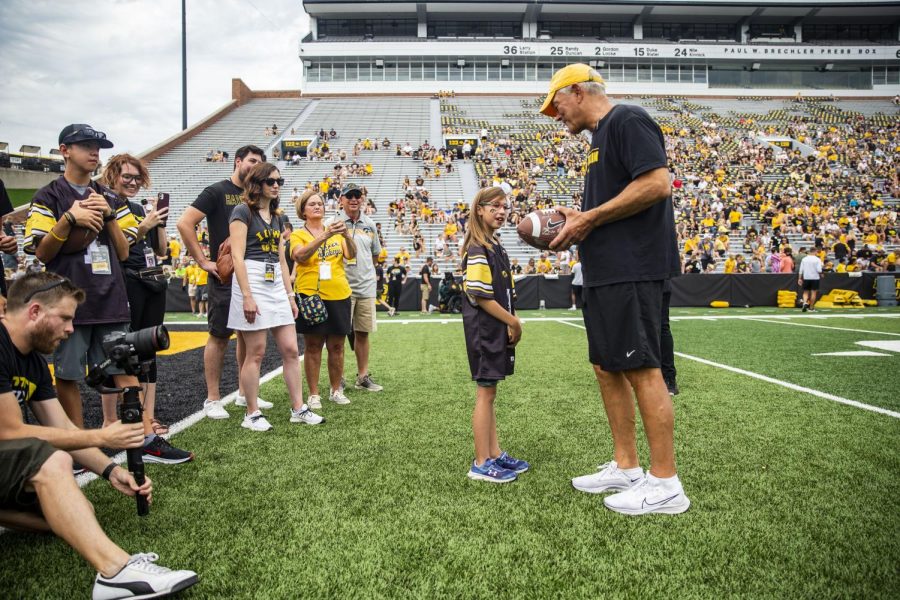 Audrey Schneller has been coming to Iowa City since she was an infant.

While the past seven years have been filled with eye exams, this time she’s coming back to town as a Kid Captain, not a hospital patient.

While Audrey has never been admitted to the University of Iowa Stead Family Children’s Hospital long-term, her mom Amanda said the hospital played a pivotal role in the discovery of Audrey’s genetic eye disorder. The family was referred to UIHC after observing Audrey’s eyes fluttering.

The family road tripped from Waukee, Iowa, to Iowa City for the first time when Audrey was just three months old. When the family first got to UIHC, Audrey was legally blind, Amanda said.

“We did genetic testing through the University of Iowa’s research department,” Amanda said. “So, at that time, they kind of told us you could have answers as soon as a few months, that it could be five years, or you could never get results.”

The Schnellers received the results 1.5 years later, learning Audrey had folds in her retinas which caused the poor vision in both eyes.

“Honestly, I feel like we got answers back way sooner than I expected us to,” Amanda said. “I didn’t expect it to be that quick. We were really thankful when we got the call that we finally knew what we were dealing with.”

Since then, a team of multiple doctors, including Low Vision Specialist Mark Wilkinson, have provided her with care.

Wilkinson said the team has worked with Audrey for the past seven years to strengthen her vision in both eyes. They also discovered Audrey’s condition was caused by a mutation in the KIF11 gene. At the time of her diagnosis, she was the 87th case. Hers was the 13th novel mutation, meaning it was slightly different than the other 86.

While her condition is extremely uncommon, Audrey has taken it in stride.

“It is a very, very rare condition,” Wilkinson said. “Fortunately, you know, right now, she’s doing better than many, which is good. In addition, it’s gotten a little bit better over time, which is also good.”

Audrey has had two retinal laser surgeries to ensure her retinas do not detach and she returns to UIHC multiple times a year for check-ups on her vision.

“She’s doing the best she can to make her vision the best that it can be,” Wilkinson said. “It’s a big team of people here in the eye clinic who are helping her to function her best and seeing her on a very regular basis. We’re just optimistic that we’re going to be able to help her maintain her vision.”

Now, Audrey’s vision has improved so much that, if she continues to strengthen it, she will be able to drive one day, her mother said.

“Her doctors tell us every time, because every time we go she improves, and they always say we never expected her to do as well as she’s doing today. So, she’s rocking it,” Amanda said.

This weekend, the Schneller family returns to Iowa City for Audrey’s debut as the second Kid Captain of the 2022 football season.

The family most recently came to Iowa City to attend Kids Day, where Audrey walked onto the turf at Kinnick Stadium with her favorite player, Iowa wide receiver Nico Ragaini.

The night before Kids Day was the first time the Schnellers saw Audrey as a Kid Captain. The family walked around Kinnick Stadium when they saw her photo on a banner attached to a light post.

“We were just talking about it and all of a sudden, I can’t remember who noticed it first, but someone was like, ‘Oh my gosh, there she is.’ And so we, of course, had to go across the street and get her picture taken with her underneath it,” Amanda said. “It’s cool knowing that, you know, even when we go for her next appointment, her picture will still probably be up.”

Kids Day was the first Schneller trip to Iowa City that was not centered around doctors, Amanda said.

“It was like we were brand new and were like, ‘This is kind of weird not going to our usual stuff that we do but there was a lot of fun,’” she said. “That was a great day.”

For Audrey, the most exciting part of being a Kid Captain is having the attention on her as she waves to the crowd. Audrey, a dancer, is used to being in front of large groups of people.

“I’m going to stand at the center of [the field],” she said.

A previous version of this story indicated only 13 mutations have ever been recorded in the KIF11 gene. The DI regrets this error.