Iowa politicians offer their condolences, thoughts to the British people, and the Royal Family after the announcement of Queen Elizabeth II’s death. 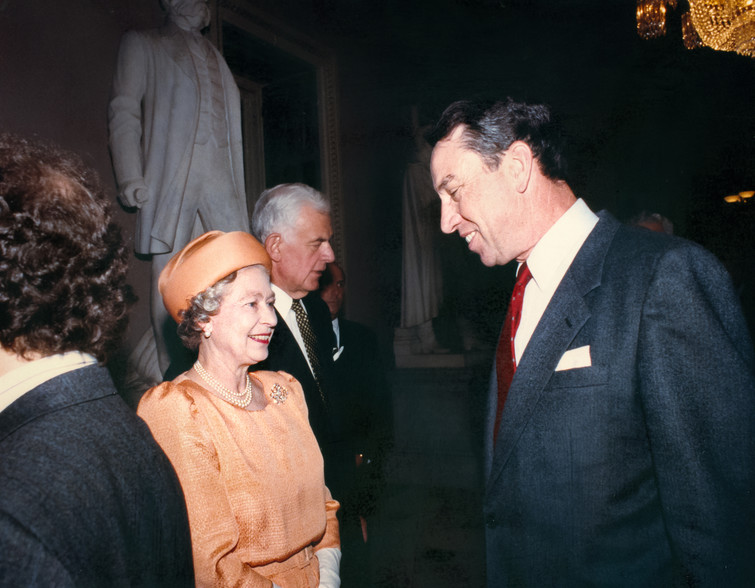 Sen. Chuck Grassley, R-Iowa, meets with Queen Elizabeth II when she delivered her 1991 address to Congress.

Queen Elizabeth II died on Thursday, after serving as the British monarch for 70 years.

It was reported by The Guardian this morning that the queen was in poor health. The queen was surrounded by friends and family as she passed in her summer retreat in Balmoral Scotland. The queen had reportedly struggled with mobility problems towards the end of her life; officials have not released an official cause of death.

The queen celebrated her 70th year on the throne three months ago while the country took a long weekend to celebrate the event. She ruled longer than any other British monarch in history.

Queen Elizabeth has served as the reigning monarch since former President Dwight Eisenhower was inaugurated in 1952 and has worked with 13 U.S. presidents.

The queen’s husband Prince Phillip, the Duke of Edinburgh died last year at the age of 99.

Her four children include Prince Charles of Wales; Princess Anne; Prince Andrew, the Duke of York; and Prince Edwards, the Earl of Wessex.

The queen also has 12 great-grandchildren.

As the news of the queen’s death rippled through social media, Iowa Politicians are responding to the news.

President Joe Biden’s Press Secretary ​​Karine Jean-Pierre said in a press briefing early Thursday afternoon that the President’s thoughts are with the royal family as they work through this time.

“Our hearts and our thoughts go to the family members of the queen, [and to] the people of the United Kingdom,” Jean-Pierre said  towards the end of the press briefing Thursday afternoon.

“An enduring admiration for Queen Elizabeth II united people across the Commonwealth. The seven decades of her history-making reign bore witness to an age of unprecedented human advancement and the forward march of human dignity,” the statement said.

House Speaker Nancy Pelosi, D- California, ordered the capitol’s flags to half mast after the news of Queen Elizabeth’s death.

Gov. Kim Reynolds offered remembrance of the Queen’s life and work on Thursday afternoon, in a tweet.

“Today we recognize the life and legacy of Queen Elizabeth II. She was a remarkable and steadfast woman who fought side by side with the United States through some of the Free World’s most trying times,” Reynolds said. “ I’ll always admire her fortitude, love of freedom, and tenacity that has inspired other women in leadership.  Kevin and I join with Iowans in sharing our condolences to the Royal Family.”

Sen. Chuck Grassley, R-Iowa, wrote in a tweet on Thursday afternoon expressing his condolences to the royal family.

“Queen Elizabeth II was such a great queen. She loved the British ppl & was deeply involved in everything a queen must do. I appreciate all she’s done for the ppl of Great Britain She’s a symbol for the whole world on decency & humanity— God bless the Royal Family,” Grassley tweeted.

“Queen Elizabeth II devoted her life to serving her beloved nation with grace and humility for over 70 years. Through her tenure, the United Kingdom faced many triumphs and hardships, yet the Queen never wavered,” said Miller-Meeks. “Queen Elizabeth set the standard for leaders around the globe, and her service will be remembered for generations to come. My heart goes out to her family during this difficult time.”

What’s next for Britain

With the queen’s death, known as Operation Unicorn is under way after she passed away in her summer home.

The British government has instituted a 10-day mourning period leading up to the queen’s funeral. The queen will remain at Balmoral for the remainder of Thursday and will be transported to London on Friday.

The Royal Family has not yet released information about the queen’s funeral procession.