Iowa's offensive coordinator said he was surprised and disappointed by the Hawkeyes' Week 1 offensive output. 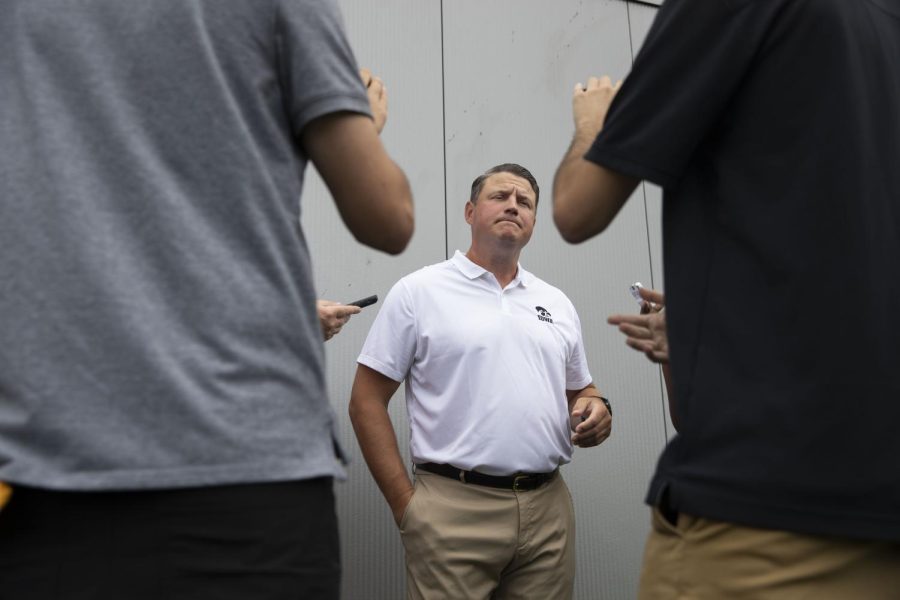 While Iowa managed to win the game, it did not produce a touchdown. In fact, its only offensive score came via a 46-yard field goal from sophomore placekicker Aaron Blom.

“When things aren’t going well, trust me, it’s my fault,” Ferentz said during a Zoom press conference Wednesday. “The buck stops with me.”

Iowa currently ranks 129th in the 131-team FBS in total offense. Georgia Tech, which is 123rd in the nation in total offense, is the only other Power Five school that is rated outside the top 120 in the nation. The Yellow Jackets put up 237 yards against the Clemson Tigers last weekend.

Ferentz said he was surprised and disappointed by the Hawkeyes’ offensive woes in the season-opener. The sixth-year OC noted the Hawkeyes’ 7-3 win wasn’t reflective of the preparation Iowa put in on offense during practice.

“The good news is, you get on the tape and the first thing you’re worried about is, are we having issues with effort or attitude?” Ferentz said. “That’s certainly not our problem right now. Everything that we saw on tape as we studied it, we feel like we can go back to work and correct. Right now, that’s what we’ve been hard at work at.”

Ferentz didn’t disclose what it would take for Petras to lose his starting role. He added that Iowa doesn’t view its backup quarterbacks like bullpen pitchers. Rather, the Hawkeyes just want to find the quarterback that gives them the best chance to win and have some consistency at the position.

“You don’t want to put somebody in a bad position,” Ferentz said. “You don’t want to take somebody out of a situation that you feel like they can work their way through. So, the reality is, we do have confidence in both players.”

The Hawkeyes’ offense averaged 2.7 yards per play and 1.6 yards a run. Petras was sacked twice.

Iowa will likely get some help in the run game in Week 2. Gavin Williams, the Hawkeyes’ first-team running back, didn’t participate in Sept. 3’s Iowa-South Dakota State game. At a Tuesday press conference, Iowa head coach Kirk Ferentz said he expects Williams to play in the 2022 Cy-Hawk game on Saturday.

As for wide receiver, the Hawkeyes are anticipating being without senior Nico Ragaini and sophomore Keagan Johnson for the second week in a row. Ragaini and Johnson’s injury statuses haven’t been officially disclosed.

Ferentz said the Hawkeyes must find ways to win with the personnel they have active. He added he was pleased that most of the passes Saturday were targeted to the right player.

“At the end of the day, all we can do is try to be more effective on a daily basis, on a weekly basis,” Ferentz said. “All those personnel issues, understand that’s part of football and always has been, they always will be, and we’ll face more of that as the season goes on. That’s not going to change. Hopefully, we’ll get the cavalry coming at receiver at some point.”