The regents will look at a request to fund Iowa’s public universities at its meeting next week. 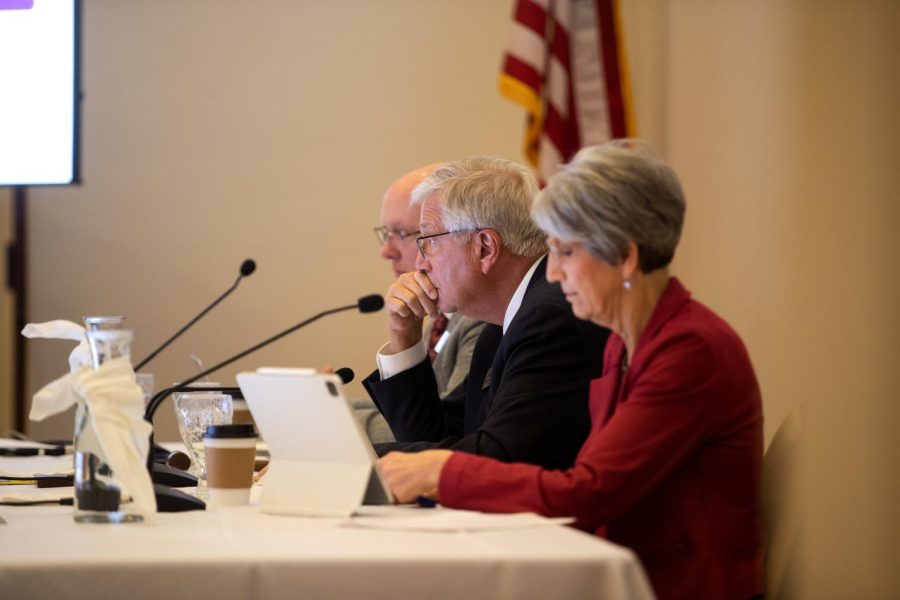 Board of Regents President Mike Richards listens during a regents meeting in the Alumni Center at Iowa State University on April 6, 2022. The regents looked over requests and plans from the University of Northern Iowa, ISU, the Iowa school for the deaf, and the University of Iowa.

The state Board of Regents announced its request for state appropriations Tuesday morning in documents for its Sept. 14 and 15 meeting.

The fiscal 2024 appropriations regents request totals $630.46 million across the state’s three public universities for operation costs and other appropriations. Alongside the monetary requests, the regents are asking for the authorization of actions by regent staff to collaborate and partner between regent institutions and sectors of the state government.

“The Regent legislative efforts are an integral part in successfully receiving requested funding,” the document reads. “… To maximize benefits to Iowans and other citizens, the Board of Regents advocates for adequate support for Regent institutions from all sources for high quality educational opportunities accessible to Iowans, research and scholarship, service activities, and economic development efforts.”

The University of Iowa makes up for more than $230 million in general education appropriations requests, the most of the three public Iowa universities. The documents show an incremental $12 million for both the UI and Iowa State University. The UI will have a continuation of over $218 million from fiscal year 2023.

As for special purpose unit funding in the education appropriations requests, the UI has four times the amount asked for by the University of Northern Iowa and six times ISU’s asking. None of the unit funding for the UI has incremental costs, strictly the continuation costs from the last fiscal year. The university sits second in requests for funding in this category, behind ISU’s more than $47 million ask.

The UI is asking for more than $13 million for the following 12 units:

As for economic development appropriations, the UI is asking for more than $3 million. $800,000 is being requested for agriculture and natural resource appropriations for the university as well. In other funds, the UI is looking for $800,000 additionally to help the UI Hospitals and Clinics’ psychiatry residencies according to the documents.

The regents will consider approving the state appropriations request in Cedar Falls, Iowa, at UNI next week.