The forward has scored six goals in four games to start the season, leading the Hawkeyes. 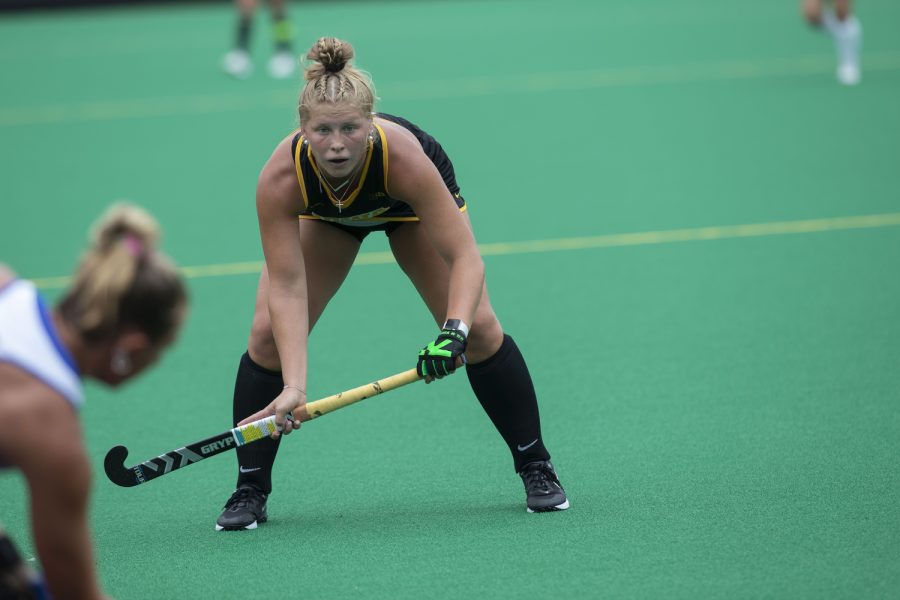 Iowa player Alex Wesneski waits for the ball after scoring a goal during a field hockey game between Iowa and St. Louis at Grant Field in Iowa City on Sunday, Sept. 4, 2022. The Hawkeyes defeated the Billikens, 6-0. Wesneski scored two goals and played 26 minutes.

For Iowa field hockey’s Alex Wesneski, the ascension from role player to top scorer has been a winding road.

As a true freshman in 2020-21, Wesneski saw playing time in all eighteen games and started six for Iowa en route to a Final Four appearance. She provided eight points for the Hawkeyes in her freshman campaign.

But her role subsided during her sophomore season in 2021-22. A year ago, Wesneski played in 14 games, starting none, for a Hawkeye field hockey squad that peaked at No. 1 in the national polls and captured the Big Ten regular season title before falling to eventual champion Northwestern in the NCAA Tournament’s Elite Eight. She recorded three total points, netting a lone goal against Michigan State and recording one assist.

This year, the junior from Forty Fort, Pennsylvania, has already quadrupled last season’s offensive output in the first four games alone. Wesneski dropped back-to-back two-goal games against Boston University and Saint Louis over the weekend to boost her season total to twelve points.

Her hot start to the season is no surprise to Wesneski’s teammates and coaches.

“She’s a goal scorer. We’ve always known that about her. That’s why we recruited her,” head coach Lisa Cellucci said. “She’s in the right place at the right time, and she uses her physicality and her strength, that’s really what it is, it’s just great body position.”

The Hawkeyes recruited Wesneski out of Wyoming Seminary Lower School in Forty Fort, Pennsylvania, in the class of 2020. She won back-to-back state championships in the fall of 2018 and 2019 for the Blue Knights alongside Hawkeye redshirt freshman goalkeeper Mia Magnotta.

Cellucci said Wesneski needed an opportunity to showcase her talents, and she found the time this season. While other Hawkeyes have started out slow in 2022, Wesneski has sprung into action.

“We’re really excited to see her take off,” Cellucci said. “It’s been an awesome welcome to our offense, because to be honest we weren’t entirely sure where the goals were going to come from this season.”

Cellucci added that Wesneski’s growing self confidence has been key to the scoring boost she has provided for the No. 5 Hawkeyes early in the season slate.

“Whoever’s going to step up and be next in and be able to score the goals, we will take it,” Cellucci said. “I think Alex has a lot of confidence right now, and she’s going to keep building off that.”

Despite all her personal success early in the season, Wesneski is quick to deflect praise to her teammates.

“I honestly think we’re just putting the ball in the right spaces,” Wesneski said after her two-goal performance against Boston University on Friday. “We’ve got good ball distributors all over the field, and both my goals today came from great assists, so I’ve got to give credit to my teammates. I’m just standing in the right spot.”

Regardless of who deserves the credit, Wesneski and her Hawkeye teammates have got the ball rolling as Big Ten play draws near. After a double-overtime loss to No. 2 North Carolina on Aug. 28, the Iowa offense has bounced back to the tune of ten goals combined in the past two games.

Wesneski and the Hawkeyes will be back in action on Friday at Grant Field against Providence University.