Franken said parts of rural Iowa are struggling economically and that he has a plan to fix it in response to the Grassley campaign’s ad that criticizes Franken for calling rural Iowa “depressing.” 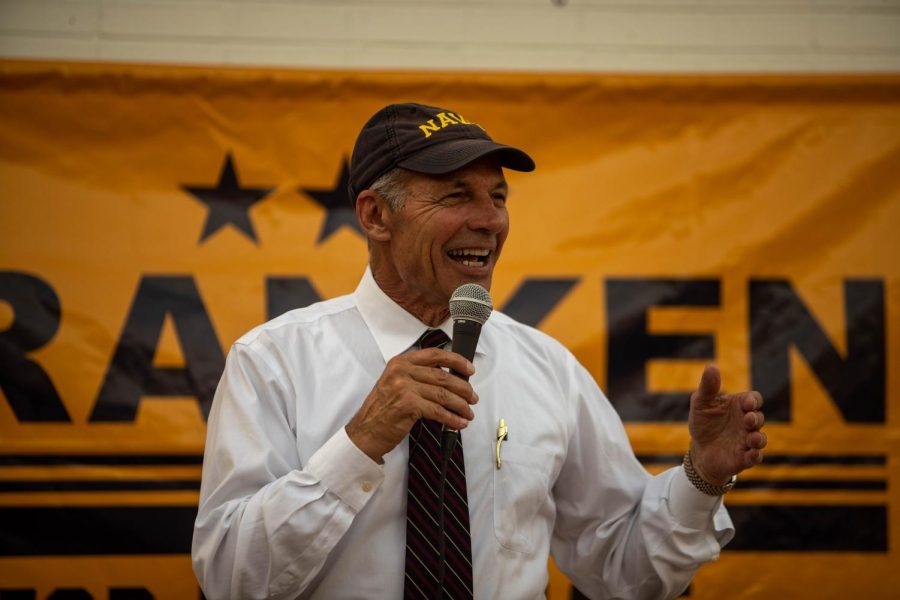 Michael Franken, a running democratic candidate for the US Senate spoke today at a meet and greet coined as his ”River to River” This meet and greet was held at Tic Toc restaurant. Held outside, fans of Franken cheered him on as his speech was listened to by his supporters.

The commercial quoted Franken as saying rural Iowa was “depressing,” Franken said the quote was taken out of context.

During a campaign event on Friday night in Cedar Rapids, Franken said that while he said that rural Iowa might be depressing, there is room for improvement and that he has a plan to revitalize rural areas to attract a younger population to prevent the mass exodus of young people from rural cities all across Iowa.

“Aspects in rural Iowa are not what we wanted them to be economically. And I’m sorry that the truth hurts so much. You have to identify the problem before you proceed to a solution,” Franken said. “I got ideas on how to re-sculpt things, how to recraft them. I see Iowa having the cheapest electrical grid, most redundant, most sustainable and a net negative carbon footprint.”

Rural areas saw an average decrease in population of 0.6 percent in the last decade according to the U.S. Department of Agriculture.

Franken said during his teen years Iowa was leading in education and  he would like to see Iowa return to its status as a leader in education, but to do that Iowa has to fund public education.

“I see Iowa regaining this. We need to put teachers on the high list of who should be funded,” Franken said. “We should not attack their teaching principles, their expertise.”

Franken also said community college, trade school, and preschool should be free, but not university education.

“I’m a big fan of postgraduate education and apprenticeship training that doesn’t put you in a rears for the rest of your life. I don’t think it ought to be free,” Franken said.

Franken is a critic of President Joe Biden’s student loan forgiveness program not addressing the root of the problem, but calls the plan “a welcome first step.”

RELATED: Biden’s new student loan plan will forgive up to $20,000 in debt

“The Administration’s college debt forgiveness plan does not ‘fix’ the problems associated [with] the cost of higher education. A far more comprehensive approach is needed,” Franken Tweeted. “We must also invest in job training and technical education programs for the trades. While college isn’t for everyone, everybody needs a job. I’ll be a leading voice in the Senate to get it done.”

Franken said there is a stark need for childcare in Iowa that would allow more parents to return to the workforce and help grow Iowa’s economy.

“I would like to see a state or municipality funded childcare program to ensure that those child care providers have an opportunity to work if they want to go outside the home,” Franken said.

Franken said that everyone is hiring and there aren’t enough people to fill the positions. Iowa Workforce Development’s IowaWorks online job portal had 10,000 open positions as of September 2nd.

“Because God knows in the state of Iowa, from a seamstress in Shenandoah to a dock worker in Dubuque, everybody needs employees, everybody, everybody, and it’s curtailing our growth as a state,” Franken said. “Companies don’t want to expand because they don’t think they can get the necessary employees. Companies don’t want to move here because they don’t think there’s enough people to satisfy their workforce.”

Democrats have been criticized about the passage of the Inflation Reduction Act, which republicans have said will cause inflation to worsen.

Franken said, to a crowd of his supporters at a campaign event in Cedar Rapids, he is not a professional politician, rather a public servant looking to serve the people of Iowa.

“I’m not a professional politician. I’m a military officer and a person and a person have a long record and in looking across partisan lines. I was never a political animal. I grew up in an apolitical household. We didn’t talk politics at the breakfast table,” Franken said.

Franken also said that Americans need to find unity and common ground with one another.

“Let’s consistently say to ourselves, country before party – people before politics,” Franken said.

Franken will attend a debate with his opponent, incumbent Sen. Chuck Grassley in a televised debate on the Iowa Public Television network on Oct. 6.