Bohannan and Mathis who face off against Republican incumbents are looking at an uphill battle to the ballot box. 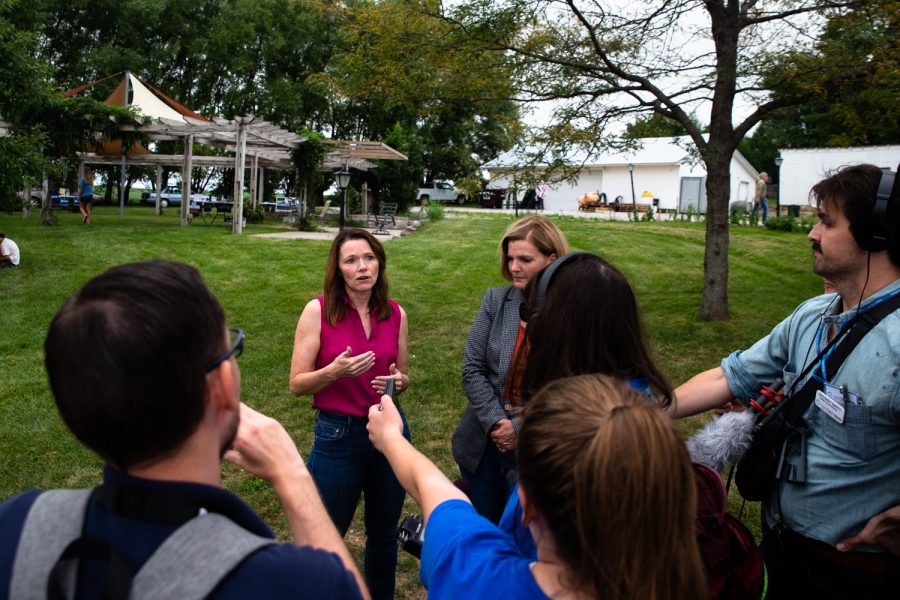 Iowa Democrats are looking to get voters to shore up a “blue wave” this midterm season.

Mathis and Bohannan co-hosted a fundraiser and campaign event on Saturday at the Sutliff Farm and Cider House in Lisbon, on the border between the 1st and 2nd Districts.

Mathis said to the fundraiser attendees she realizes how important it is to get out the vote this November for Democrats.

Mathis and Bohannan are looking to take a grassroots, “boots on the ground” approach to getting out the vote.

“I am making every effort to get out and talk to people all throughout the district in Rural, Urban, small towns, larger cities,” Bohannan said in an interview with The Daily Iowan “I think it’s really important that we do that, these issues are all interconnected.”

Mathis said she is looking to engage her rural voters having come from rural Clinton county herself.

Bohannan and Mathis’ races are both predicted to stay in incumbent hands as of Sept. 3, according to ballotpedia, with three major election forecasters saying Iowa’s first and second congressional districts are likely Republican.

However, Democrats are banking on increasing voter turnout, even after the Iowa Republicans election omnibus bill passed in 2021 that shortens early voting periods, absentee ballot periods, and adds criminal penalties for election officials.

Bohannan said this election cycle could determine the “future of this nation,” with Politico predicting the U.S. House and Senate going under republican control after the midterms.

“Our country is on the line in 2022. The future of this nation is going to depend on who holds the House of Representatives and the United States Senate and that is going to come down to a handful of swing district’s around the country,” Bohannan said.

The odds don’t phase Mathis. She said that after her election to the Iowa Senate in a purple or swing district she’s confident she can win over voters.

“We know that we can take what we learned in this purple district that I’m in as an Iowa State Senator and scale it up. That means talking and messaging to people about the things they want to hear solutions for, like the economy and inflation, reproductive rights, Medicare and Social Security,” Mathis said to supporters.

Bohannan is confident in her district as well, because her incumbent opponent  only won by six votes in 2020.

The district was seated by longtime incumbent Dave Loebsack from Mt. Pleasant  who decided to retire at the end of his last term. Miller-Meeks had run against Loebsack three times before and lost to the widely popular centrist incumbent.

“Put an end to the culture wars”

Bohannan joined many other Democrats at the event in calling for an end to extremism, calling for compromise and unity.

“As I’ve been talking to a lot of people, Democrats, Independents, Republicans, a lot of us agree on the things that we need to do. The problem is that extreme politics are getting in our way,” Bohannan said. “I’ve always thought that debate and that compromise make us better and stronger as a country. But what we have right now is not debate and compromise. It’s extremism and chaos.”

“Donald Trump and MAGA Republicans represent an extremism that threatens the very republic,” Biden said.“Democracy cannot survive when one side believes there are only two outcomes to an election: either they win or they were cheated.

Bohannan also called for unity at the event and vowed to listen to Iowans and their needs.

“It is time for Democrats, Independents and Republicans– yes and Republicans – to come together and end this kind of political division and extremism that plagues our country,” Bohannan said.