On the night of Aug. 31, SCOPE’s sixth annual Battle of the Bands unfolded in the IMU Pavilion and crowned 24thankyou as the winner. 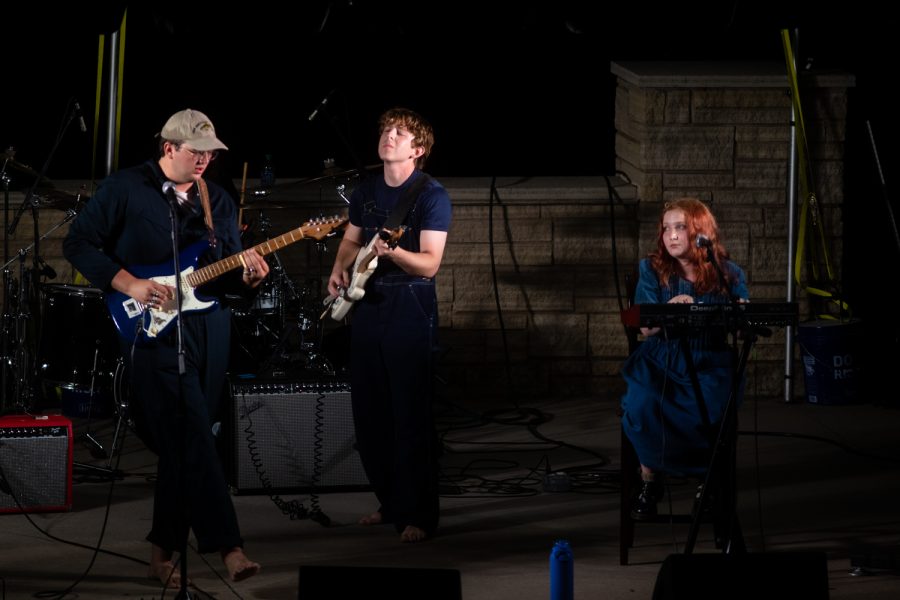 24thankyou performs during Battle of the Bands at the Iowa Memorial Union Amphitheater on Wednesday, Aug. 31, 2022.

The Iowa Memorial Union pavilion filled with music enthusiasts on Wednesday night for SCOPE’s sixth annual Battle of the Bands. The sun fell behind the treetops at 7 p.m., offering the crowd perched along the stone pavilion steps some relief from the heat. Groups of people sat shoulder to shoulder, nodding their heads or tapping their heels as one rhythmic unit.

The three talented bands facing off in this battle were Funkatude, Soup RIOT!, and 24thankyou. Each band has a unique style of sound, creating the diversity of music that SCOPE’s director of the program, Joey O’Kelley, aims to capture with this event.

“I don’t want to put on a show where all the bands sound the exact same,” O’Kelley said. “So, I like that we got different styles going on.”

He also emphasized the importance of Battle of the Bands in an art-oriented community like Iowa City to showcase local talent and bring incoming University of Iowa freshmen into the community.

“It’s a great introduction to the arts of Iowa City, especially to music,” O’Kelley said.

The first band to take the stage was Funkatude, a band that performed an electric set of originals and mashups of classic songs, including “Thriller.” By their second song, the audience was on their feet clapping along to the groove of the beat. Happily engaged in their music, Funkatude had everyone smiling and jamming out until the end of their set.

The Iowa River shimmered in streetlights and a thin crescent moon shone in the cloudless sky as Soup RIOT! took to the stage next. Their first rock song sent a ripple of energy through the crowd that endured for their whole set. Describing themselves as a “political punk” band, their original songs consisted of expressive lyrics and a quick beat that was impossible not to move to, particularly for two girls in the back of the pavilion who rose to their feet to dance to “I Let a Fascist Play My Guitar.”

The final band to step into the spotlight was 24thankyou. They began their set with a recording of layered voices reciting the band name over and over. This instantly hyped the crowd, which whooped when the voices rose to a crescendo and faded away as the first song started playing.

The set opened with a smooth and sultry rendition of “Ain’t No Sunshine” by Billy Withers and closed with an intense original, “Cold Car, I’m Veering.” The rest of their songs were a mixture of originals and covers, consisting of two originals, “Jiraiya,” and “Cowboy,” and one cover of “As It Was” by Harry Styles.

Emma Parker, vocalist and keys player for 24thankyou, stated before their set that the experience would be really cool whether or not they won, especially because the other two bands are so talented.

RELATED: Wacky Willy’s battles it out for the win at SCOPE’s Battle of the Bands

“It would be awesome to win, but if not, we’re just here to perform and have fun,” Parker said.

The audience clearly had fun with the final band, as they sang along to songs and swayed their hands overhead.

UI freshmen, Grace Early and Elizabeth Von Loh, expressed their opinions on the evening’s performances. Van Loh particularly enjoyed the “indie vibes” of 24thankyou while Early preferred the energy of Soup RIOT!. Early said, though, that overall “all the bands were really good.”

When the time came to announce the winner, all the bands gathered beneath the white stage tent, united in their anticipation. 24thankyou emerged victorious, and immediately celebrated with pats on the backs and high fives amidst enthusiastic applause from their competitors.

The band members of 24thankyou said they had a great time performing and were thrilled to win.

“So much respect to Funkatude, though,” said member Michael Muhlena. “And [Soup RIOT!] killed it.”

24thankyou has three original songs, “Cowboy,” “Jiraiya,” and “Cold Car, I’m Veering” available on all streaming platforms, and are working on a new album that will be released in the coming months.