The University of Iowa’s International Writing Program is celebrating its 55th anniversary this year. The program associates have been working on a celebratory exhibit since 2019 — which will finally open on Sept. 8 at the UI's Main Library. 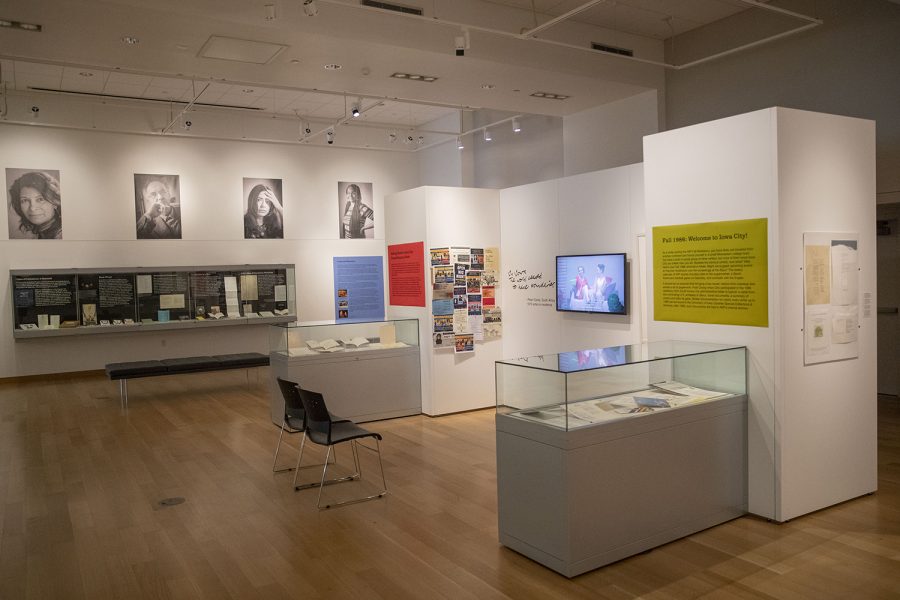 The International Writing Program 55th Anniversary exhibit is seen at the Main Library in Iowa City on Aug. 29, 2022.

There are 350 graduate programs for creative writing in the U.S., but the University of Iowa is the only program to host an international literary community with the help of the U.S. State Department. The International Writing Program will celebrate its 55th season on Sept. 8 at the UI’s Main Library with a new main gallery exhibit, titled A Hub, a Network, an Archive: 55 Years of International Writers in Iowa City.

The exhibit opened on Aug. 22, and will be on display through Dec. 16. Christopher Merrill, the director of the IWP, noted the large scale of the program’s global influence, stating “there is no program like the IWP anywhere in the world.”

“These are writers who are coming through the diplomats in the Foreign Service national staff in different embassies and consulates, who have their fingers on the pulse of what’s happening in each of those countries, [in their] literary worlds,” Merrill said.

The IWP has hosted people from more than 150 different countries during its 55-year run. Because the writers who come to the program do so through the U.S. State Department, it is not the IWP that selects candidates. Instead, international embassies from around the world nominate their nation’s great writers for the UI’s IWP.

This year, there were 118 nominations for 15 spots within the program. Each country’s embassy was invited to fund their own additional candidates if they wanted to send more writers. As a result, for the first time since 2019, the IWP will be hosting a full panel, with 33 writers in total.

Writers submit 10 to 15 pages of the English translation of their work, as well as a statement about what they hope to take away from the 10-week program experience. The list of countries hosted by the IWP continues to grow — this year, the IWP is hosting its first writers from Guinea-Bissau and Benin.

Among the many pieces of history curated for this gallery, there are photos of previous participants, examples of old documentation that the UI provided to IWP residents when they were visiting, and documentation regarding the founding of the program.

Cherie Jones, from Barbados, is one of the visiting authors this year, and wrote about her experience with the IWP exhibit in an email to The Daily Iowan.

“Visiting the IWP exhibit was a wonderful opportunity to better understand the incredible legacy of creative writing at University of Iowa and the International Writers Program in particular,” Jones wrote. “Seeing photos of writers I admire while they were in residence at IWP was awesome and I learned more about the work of IWP outside of the residency as well.”

Merrill said the gallery exhibition is a “kind of world history,” in the sense that the IWP was founded during the Cold War. For example, the gallery includes former President Richard Nixon’s 1971 speech announcing his visit to China, because the IWP was “the first cultural organization to be working with Chinese writers.”

“You’ll get a picture of the world through writers’ eyes over the past 55 years,” Merrill said.

The IWP brought together authors to write about topics like the Diaspora, the end of the Cold War, the wars in the former Yugoslavia, and 9/11. Now, in 2022, they will continue to write about global affairs.

“We are working at this very interesting hinge moment in history where you could say the battle between Democratic impulses and then authoritarian imperatives have become quite loaded,” Merrill said.

In this session, the writers will respond to conflict referenced in the manuscripts, photographs, and in short videos that will be on display in the exhibition. The IWP is also hosting a Palestinian writer and an Ethiopian writer to explore what is occurring in their homelands, furthering the program’s notion of cultural diplomacy, or the international exchange of information and ideas.

“On the most basic level, we bring writers together, to get readings and all presentations to visit classes to visit farms to get a taste of Iowa life,” Merrill said. “In that way, they come away with a bigger picture of what this country is about and a bigger idea of what they might be able to do as writers in conversation.”

Additionally, the UI Libraries’ staff have made a concerted effort to buy all the books of all of the writers who have ever been a part of the IWP. Two writers from this collection are Noble laureates, as well as several Neustadt prize winners, and most recently, a winner of a Booker Prize.

Lisa Gardinier, the curator of international literature at the UI Libraries, and Nataša Ďurovičová, an editor at the IWP, first began work on the exhibit in 2019. Gardinier took the helm of collecting the vast array of literature produced by IWP writers over the last 55 years, but not specifically for the new exhibit.

There will be readings by the visiting writers every week. The IWP also has a longtime collaboration with the UI theater department as well as the dance department, so there will be a night of graduate students choreographing and performing new pieces made from the works of the IWP writers.

Writers will also give presentations every Friday and film screenings every Sunday at the Iowa City Public Library for the duration of this year’s program, so candidates can show films from their countries and then discuss them with the crowd.

Mike Meginnis, the communications coordinator for the IWP, said the size of this year’s group could ultimately lead to a growth in collaborative efforts.

“I look forward to all the surprises this residency will bring,” Meginnis said.