During an event filled with food and conversation on Saturday, Sen. Kevin Kinney and other elected officials emphasized the need for Democrats to garner more support in rural Iowa. 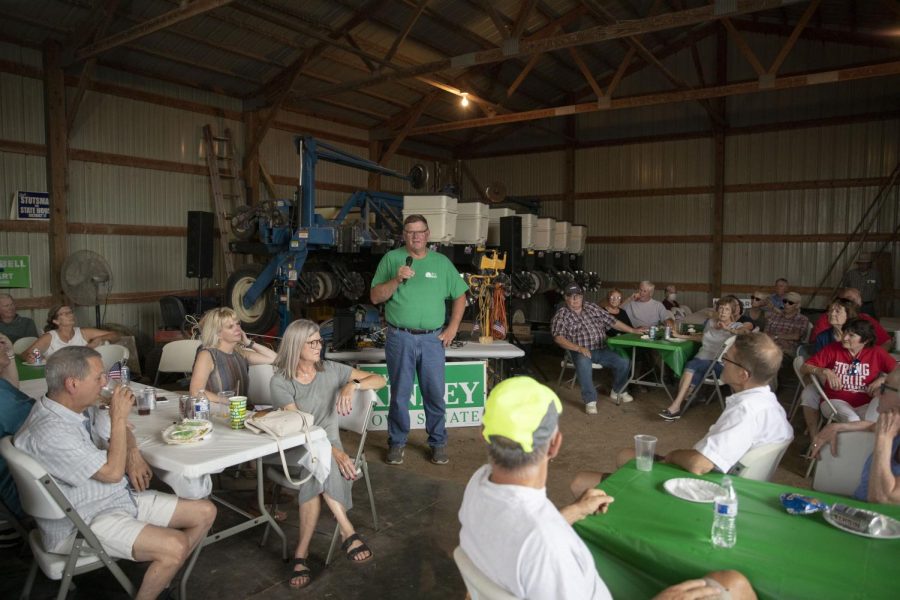 Sen. Kevin Kinney (D-Oxford) speaks at a campaign event at his family farm.

Over burgers and hotdogs, Sen. Kevin Kinney encouraged supporters and local Iowans to re-elect him and vote more Democrats into the statehouse with a barbecue at his farm Saturday afternoon.

One issue emphasized during the gathering was the need for rural Iowans to be in the statehouse and running for offices across the state.

With almost two months left until the November midterm elections, elected officials from Johnson County and around the state gathered to emphasize the need for rural voter participation in the upcoming 73 days. In attendance were Sen. Zack Wahls, Rep. Mary Mascher, State Auditor Rob Sand, and candidate for Lieutenant Governor of Iowa Eric Van Lanker, who all spoke to energize the crowd.

In an interview with The Daily Iowan, Kinney said the Democratic party needs to understand farmer’s value in the state because much of its economy is fueled by Iowa agriculture.

About 36 percent of the state’s population is settled in rural areas of Iowa, and there are over 85,000 farms spanning the entire state.

“You have to look at agriculture … 33 percent of our budget is reflected by that and one of the things that we have to do is bring good paying jobs to rural Iowa,” Kinney said.

In Iowa, Republican-registered voters outnumber Democrats by roughly 100,000, and Republicans control both chambers in the statehouse and the governorship. Democrats are hoping to change that in November, the speakers said.

Sand said in an interview with The Daily Iowan that there’s a public misunderstanding about the type of people in the Democratic party. Kinney is a farmer and he loves to hunt and fish but talking about their interests to rural Iowans helps them to garner support from folks who may believe members of the Democratic party are different from them.

The Kochs said they think the idea and reputation that sort of paints rural Iowans as “ultra conservative” is incorrect.