Iowa election officials threatened with fines and jail time under the state’s new voting law as they prepare for the November elections. 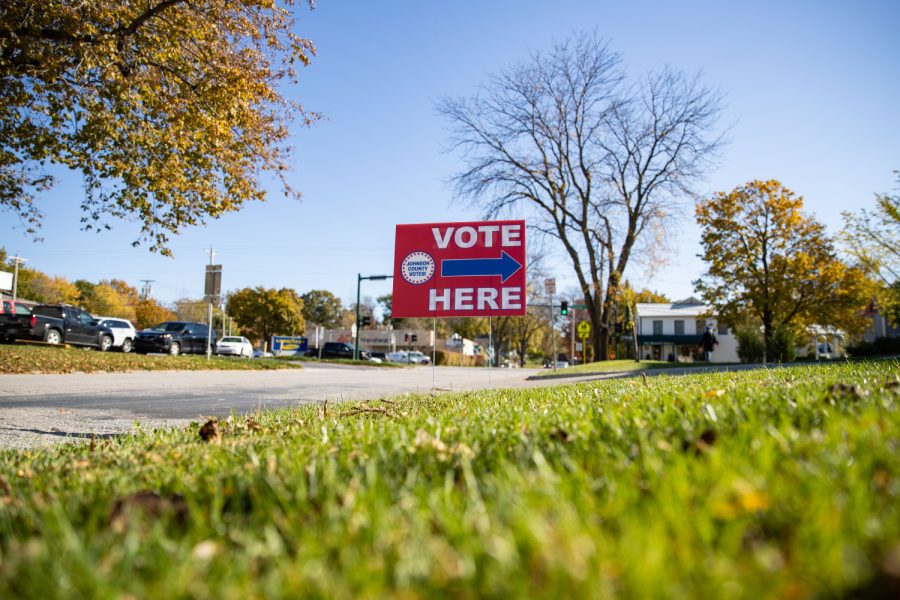 A sign indicates a polling location on Election Day at Horace Mann Elementary School in Iowa City on Nov. 2, 2021. This year’s election is centered on local city councils and school boards.

As Iowa election officials prepare for the midterm elections, county auditors could face criminal penalties under a recent law passed in the GOP-controlled legislature.

Senate File 413, signed in March 2021, made it illegal for election officials to fail to follow state guidance and state election laws. They could face up to 5 years in jail and a fine of at least $750 but not more than $7,500.

Johnson County Auditor Travis Weipert, a Democrat, said the election law passed by the GOP makes county auditors feel like they have to “walk on eggshells” to do their jobs.

“It’s not going to change anything … we will be extra careful, but it feels like somebody’s watching over your shoulder all the time,” Weipert said. “So, you start second guessing yourself and then you start making mistakes.”

“I’ve always said if I’m not doing my job, I don’t need somebody at the state level telling me, the voters of Johnson County will let me know,” Weipert said.

“Every voter wants to make sure that their vote counts and that they’re not disenfranchised. Election integrity is something that every Iowan and every American believes in and makes sure that their vote is not manipulated or cast aside for any reason,” Windschitl said.

This legislation came after former President Donald Trump’s repeated, baseless claims that the 2020 election was stolen and illegitimate.

State Rep. Dave Jacoby, D-Coralville, said the bill did not make it easier or safer for Iowans to vote.

“Making elections safer was a complete joke and the intent was to restrict voting,” Jacoby said. “Everything they did in that completely political bill would restrict voting and make it harder for working people, especially democrats to get to the polls.”

The law also shortened the early voting period and placed more restrictions on who can assist disabled voters. The new provisions allow a family member to drop off a relative’s ballot, and any registered Iowa voter may help a disabled voter deliver their ballot. In both instances, a registered voter who plans to turn in another’s ballots must fill out a form to verify their identity and present that form when they turn in the ballots.

“We continue to maintain that these laws are a solution in search of a problem, there is almost no documented voter fraud, and any fraud that is connected to identification. These draconian laws are huge overkill and meanwhile they are impacting people,” Fowler said.