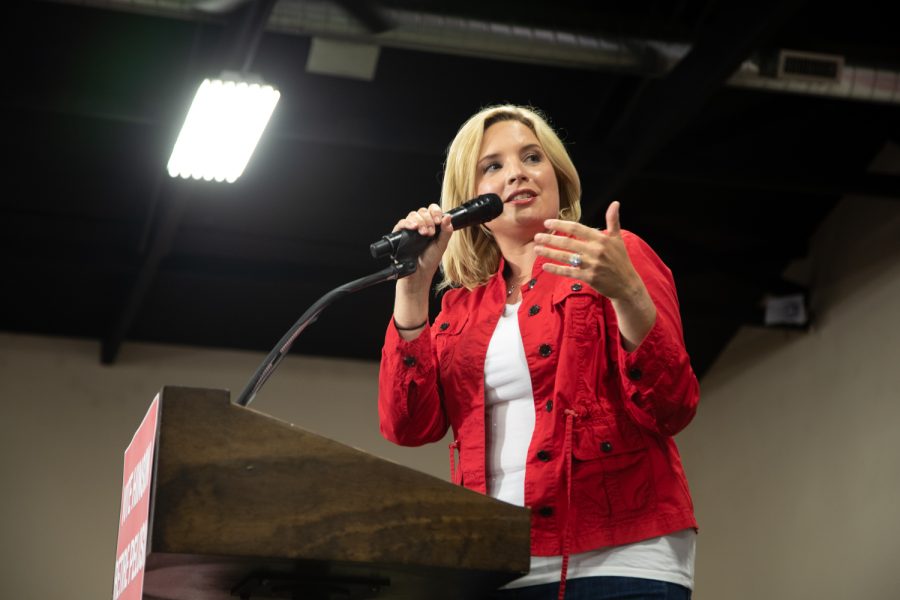 Republicans are aiming to campaign on a few ideas to push their red wave this midterm election, which comes on the heels of dissatisfaction with Biden’s administration.

U.S. Rep. Ashley Hinson, R-Iowa, held her second annual barbecue bash on Sunday afternoon at the Linn County Fairgrounds, in hopes to garner support for her re-election in the midterms this November. About 750 people attended the rally.

Speakers at the fundraiser focused on the U.S. Mexico border, rising inflation, and a rise in crime to retake key seats in the Midwest and beyond.

Republicans claims that there has been a rise in crime under the Biden administration are not entirely true. While murder and other crimes did increase from 2020 to 2021, it did so at a much slower rate than in 2020.

“I’m going to make sure that this red wave becomes a red tsunami and holds on long enough to make it to 2024,” said South Carolina Republican Sen. Tim Scott to a vibrant crowd at a rally for U.S. Rep. Ashley Hinson’s re-election in Iowa’s second district.

Hinson unseated former Democrat U.S. Rep. Abby Finkenauer in the 2020 election. She led by more than 10,700 votes, which turned the seat over to Republicans. She is running against Liz Mathis, a Democrat from Hiawatha who served in the Iowa Senate for 11 years.

Hinson said Democrats are to blame for high inflation, a border security crisis, and a lack of parental rights in education.

“The fight is real, and the fight comes on Nov. 8. because we have all seen the destruction and the chaos coming out of President Biden and Speaker Polosi’s agenda for this country,” Hinson said.

“President Biden’s presidency has been filled of failure’s and broken promises. He’s setting records for all of the wrong reasons,” Hinson said.

Hinson was among a slew of speakers at the event that bashed Biden, Speaker of the U.S. House of Representatives Nancy Pelosi, D-California,  and the Democratic legislature for the recent passage of the Inflation Reduction Act and Biden’s student loan debt cancellation plan, which were met with applause and cheers from the crowd.

RELATED: Biden’s new student loan plan will forgive up to $20,000 in debt

“You don’t pass a tax increase and $739 billion of more spending in the midst of a 40-year high in inflation, adding more fuel to the fire and you certainly would not give the IRS $80 billion (to hire) 87,000 new agents,” Scott said.

Hinson told her supporters at Sunday’s rally that she will work to ensure that parental rights are codified in national law.

Parental rights are a key issue for Republicans with Iowa’s legislature tackling the issue last session. This included  a bill that passed the Iowa Senate, but did not make its way to the governor’s desk, that would codify “Parental Rights” that would allow parents to have a say in what subjects are taught to their children and the material their children have access to.

The “Parental Rights” movement focuses on giving parent’s the right to decide what their child learns when it comes to topics like LGBTQ+ rights and critical race theory. Conservatives argue that these topics go against some parent’s beliefs and shouldn’t be taught to children by a school district.

Reynolds voiced her support for Hinson and  of the education agenda that Hinson promised to put forth in the U.S. House that aligns with Reynolds’ agenda in Iowa.

“She has a proven record of supporting families, supporting tax payers, of supporting rural communities, and this conservative mom is not afraid to push back against the liberal elites,” Reynolds said. “She is a strong voice and advocate for those that she serves.”

Three national election forecasters say the election in Iowa’s Second House district, that Hinson will compete in this fall,  is likely Republican.

“I always run like I’m 10 points behind. I will not be outworked,” Hinson told reporters. “I think this is about listening to my constituents and listening to Iowans. If what they’re telling me holds true in November, I think you are going to see a Republican House.”