Stanley Museum of Art reopens after 14 years with weekend festival

With a jam-packed schedule of speakers, live music performances, and art-related activities for attendees, the first day of the new Stanley Museum of Art’s grand opening drew a lively crowd of art-enthused attendees. 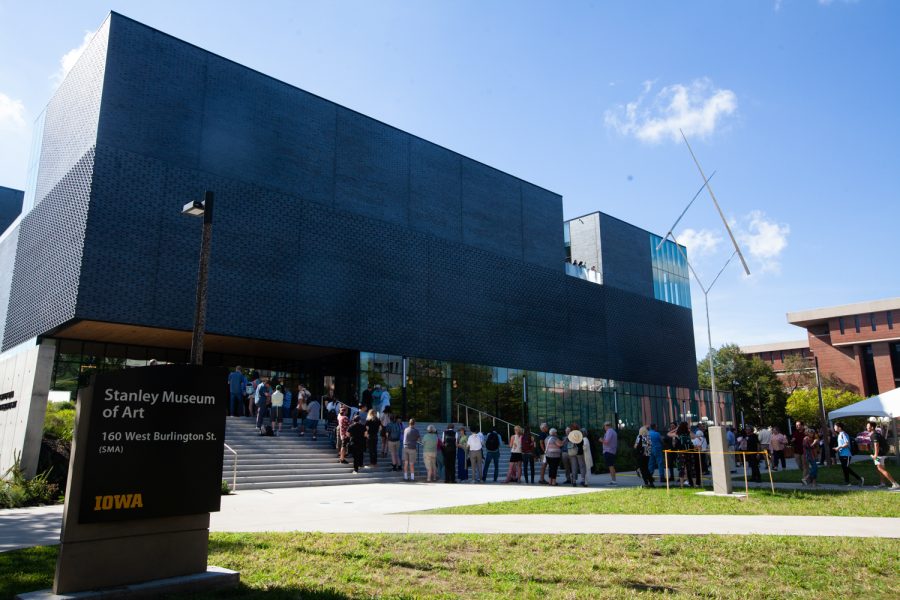 People line up to enter the Stanley Museum of Art at its opening celebration at the University of Iowa on Friday, August 26, 2022.

On a sunny Friday afternoon, hundreds of guests flocked to a shaded white tent in front of the new University of Iowa Stanley Museum of Art. After watching several pairs of golden scissors slice through an Iowa-branded ribbon, marking the official opening of the new Stanley building, attendees flooded the Stanley’s galleries for the first time in 14 years.

When the 2008 flood decimated the museum’s previous building, it was unsure just how long it would take to create a replacement home for the UI’s extensive art collection. Now, the day has finally come — on Friday, the Stanley Museum of Art officially opened.

The museum’s dedication ceremony featured key speakers like Lynette Marshall, the president and CEO of the UI Center for Advancement, Sherry Bates, the president pro tem of the state Board of Regents, and UI President Barbara Wilson. Former UI President Bruce Harreld and former Stanley director Sean O’Harrow were also in attendance, but did not speak.

“I hope for all of us, that this becomes a place for students, for faculty, for staff to spend hours, even days, if Lauren will let us,” Wilson said during the dedication. “I’m really delighted also to say that this is not going to just be for stakeholders here at this campus…A bold goal would be, could we get every third grader in Iowa into this facility to spend a moment thinking about the transformational effects of art on society?”

“I’m so excited to be here, because it’s my belief that our museums, in particular, are an integral cultural resource — that every last person deserves to access the capacity of art,” Smith said. “The Stanley was designed with that in mind. This is a classroom for our community: its sole purpose is to give us all of the chance to learn up close and personal.”

After the dedication and official ribbon cutting, the museum was officially open and a rush of attendees walked in through the Stanley’s front glass doors to get the first look at the inaugural exhibition. The building reached its capacity within minutes, and a line extending out through Gibson Square quickly formed.

Inside the galleries, museum curators gave talks about the various artwork in the inaugural exhibition “Homecoming,” that they helped bring back to the UI and surrounding communities. Diana Tuite, the Stanley’s visiting senior curator, who is originally from Maine, helped to organize and plan five of the main galleries. She spoke on several of the pieces she was excited for guests to see, including works by Elizabeth Catlett and Mark Rothko.

“Obviously many people have forgotten because of time, but I think what is great in a teaching collection is that you can see examples of perhaps one of the feelings that is most associated with an artist, then you’ll see really unexpected work.” Tuite said. “I think that we want everyone to feel like they can connect with something here. I think there’s something for everyone.

There were also various gallery hosts, attendants, and other staff members available to answer questions and speak on any pieces of art they had knowledge on. One gallery preparer, Alexandra Janezic, installed and matted one of the largest print pieces in the exhibition, a woodcut print by Durga Prasad Bandi.

“It’s been a long time since I feel like the public has gotten to come to a space and feel like for sure they have a home, like an art home,” Janezic said.

Back out on Gibson Square, the museum hosted games and activities available for anyone to play, including a giant Connect-4 game and several games of Cornhole. The event also offered free popcorn, lemonade, and water stations that attendees took full advantage of through the hot afternoon.

Although the crowd drifted some after the initial opening of the museum, attendees soon returned to observe the free music performances later in the afternoon.

With lawnchairs, hammocks, and beverages in hand, guests gathered on the grass to listen to the featured artists: Cedar Rapids band treesreach, Iowa City bassist and songwriter Pictoria Vark, and Indiana band Houndmouth.

RELATED: Rocking out at the Stanley Museum of Art

In collaboration with UI Scope Productions, the bands performed until the sunset, and the lights from the stage bounced off the Stanley’s dark exterior walls.

Ultimately, the first day of the museum’s opening was a success, and promises a robust future for the UI’s new hub of art. The festivities will continue all weekend, with additional performances and activities on Friday and Saturday.