Biden’s new student loan plan will forgive up to $20,000 in debt 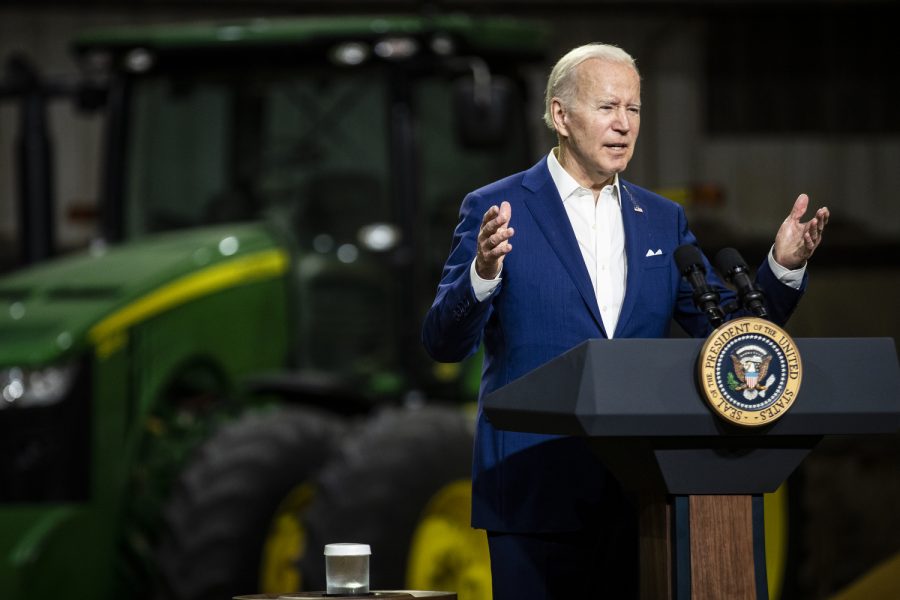 President Joe Biden speaks during his visit at the POET Bioprocessing ethanol plant in Menlo, Iowa, on Tuesday, April 12, 2022.

President Joe Biden announced a new student loan plan on Wednesday which includes forgiving up to $20,000 in federal student loans per borrower and extends the pause on loan repayment until the end of 2022.

Biden said on Tuesday that his administration will forgive $10,000 in student loan debt to people making under $125,000 and an additional $10,000 if a borrower received a Pell Grant.

“On my campaign for president I made a commitment that I would provide student debt relief, and I’m honoring that commitment today,” Biden said during the announcement.

The plan forgives student loans for people who make under $125,000 per year, or under $250,000 per year for married couples filing jointly.

“These targeted actions are for families who need it the most. working and middle-class people hit especially hard during the pandemic, making under $125,000 a year,” Biden said.

“I believe my plan is helpful and fair, helps current and future borrowers, and fix a badly broken system,” Biden said.

Federal Pell Grants are awarded to undergraduates who display an “exceptional financial need” and have not earned a degree at a higher education institution. The majority of Pell Grants do not have to be repaid unless students withdraw their enrollment, their enrollment status changed from full-time to part-time or they received additional scholarships or grants.

The White House said Biden’s plan will provide America’s working families with relief as they recover from the negative economic effects of COVID-19.

In addition to forgiving federal student loans and extending the pause on loan repayments, this new plan has two other goals:

Make the student loan system more manageable by dividing monthly payments in half for undergraduate loans and making sure borrowers working in the military, a non-profit, or in public service receive the correct amount of credit toward loan forgiveness.
Reduce the cost of college and hold institutions accountable for a tuition increase, Biden proposes to do this by making community college free and doubling the Pell Grant.

Following the first release of the details of Biden’s new plan on Wednesday morning, Republican Iowa Sen. Chuck Grassley took to Twitter to say the plan will fuel inflation and hurt other people in the country, making the plan unfair.

Ppl making up to $125,000 or a couple making up to $250,000 are getting student loans paid for by everyone else who didn’t go to college or paid their own loans. Will fuel further inflation hurting those who can least afford it UNFAIR

The Iowa Democrats twitter account tweeted minutes before the announcement and said student debt forgiveness will allow Americans to achieve their American Dream.

Since his first month in office, Biden has set a pause on student loan repayment because of the negative economic effects of the COVID-19 pandemic. Biden has since extended it multiple times but the administration called this “a final extension.”

Biden said during his announcement on Wednesday he worked closely with the secretary of education on coming up with this plan.

Biden stated in a press release on April 6, 2022, that due to the extension of the pause on student loan repayment, 41 million Americans were able to recover from the economical effects of COVID-19.

As of June 2022, there were 43 million American citizens who had student loan debt, with the highest rate of student debt being in the state of New Hampshire, according to Forbes. 14.4 million adults ranging in ages from 35 to 49 owe $622 billion and 14.4 million adults in the age group 25 to 34 $500 billion dollars in student loans.

According to the fact sheet of Biden’s new plan, student loan borrowers struggle to pay back their debt and make strides towards financial goals like buying a home.

The plan released on Wednesday morning is the first of Biden’s student loan plans to forgive student debt. His delay to release the plan has received backlash from liberals around the country but has been highly anticipated.

Biden said he wants to continue working towards universal pre-K and universal community college and would like to double the Pell Grant.

The Department of Education will release a short form borrowers can fill out and see if they are eligible for debt relief, Biden said.