Over the summer, Iowa and other Republican-led states moved to enforce restrictions on abortion following the overturning of Roe v. Wade in June. 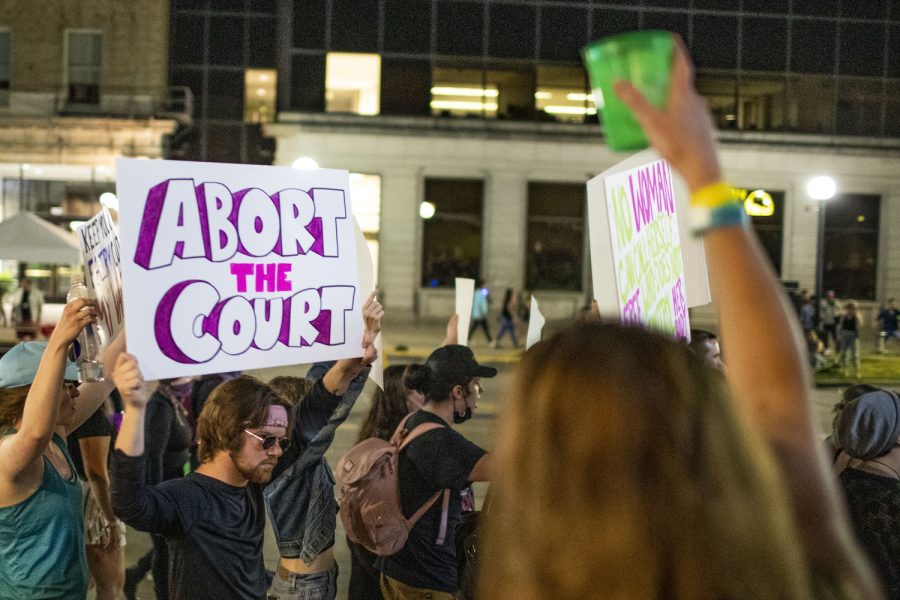 A Downtown Block Party attendee raises their cup to protesters during “Night of Rage,” an abortion-rights protest, in Iowa City on Saturday, June 25, 2022. The protest started at the Pentacrest with speakers, then, protesters marched through Iowa City.

Iowa Republicans are making headway in their attempts to restrict abortion in the state. Republicans’ efforts, however, are stalled while pending Johnson and Polk County court cases make their way through district courts.
GOP moves to limit abortion in Iowa
Gov. Kim Reynolds and other Iowa Republicans have been attempting to tighten abortion restrictions in Iowa since the overturn of Roe V. Wade by the landmark case Dobbs v. Jackson in early June. Abortion in Iowa is illegal after 20 weeks of pregnancy.

The Dobbs v. Jackson decision overturned the 50-year precedent of Roe v. Wade which established a constitutional right to abortion.

On Aug. 11, Reynolds filed a motion in the Polk County District Court that would challenge the court’s 2019  injunction that blocks the 2018 “fetal heartbeat bill” or six-week abortion ban from being enforced in the state.

“Life and death are determined by a person’s heartbeat, and I believe that includes our unborn children. As long as I’m Governor, I will stand up for the sanctity of life and fight to protect the precious and innocent unborn lives,” wrote Reynolds in an Aug. 11 statement following the filing of the motion to lift the 2019 injunction.

Iowa Democratic Party Chair Ross Wilburn said Reynolds’ and Iowa GOP’s anti-abortion sentiment goes against what most Iowans believe. According to a Des Moines Register and Mediacom Iowa Poll released in July, 60 percent of Iowans say abortion should be legal in most or all cases.

“Control over your own body gets at the heart of what it means to be free and Iowa Democrats believe that everyone has the right to decide their own destiny,” Wilburn said in a statement released by the Iowa Democratic Party on Aug. 11. “The majority of Iowans agree that abortion should be legal and this move by Kim Reynolds is against the will of the people and voters will hold her accountable in November.”

In early July, Reynolds asked the Iowa Supreme Court to reconsider the case that struck down a 24-hour waiting period before a patient can have an abortion in the state. The Republican governor said the precedent the original state Supreme Court decision was based on has changed.

The Supreme Court denied Reynold’s request on July 5, but the 24-hour wait period took effect following the court’s ruling that abortion isn’t protected by the state constitution.
Neighboring state’s action on abortion
Iowa is not the only state in the Midwest that is moving toward heavier abortion restrictions.

States like Indiana have already enacted full abortion bans in the recent months following the overturn of Roe v. Wade. In Indiana, the law outlaws all abortion except for a few exceptions including if a pregnant person’s life is at risk, rape, incest, and fetal abnormalities.

Not all Midwestern states, however, are enacting abortion restrictions. Kansas voters recently rejected a GOP-led constitutional amendment proposition that would codify abortion restrictions in the constitution. This measure was shot down in Kansas on Aug. 2, with 59 percent of Kansas voters saying ‘no’.
Iowa Democrats and Republicans plan next moves
Speaker of the House Pat Grassley, R-New Hartford, said court rulings, like the injunction on the 2018 six-week abortion ban, have kept the anti-abortion movement from advancing.

“For far too long, flawed Court rulings at the state and federal levels have blocked many of our attempts to listen to Iowans and expand pro-life protections,” Grassley said in a statement on June 28 in following the Dobbs decision. “Iowa House Republicans’ goal is to protect the lives of the unborn. That’s why I support the Governor’s decision on these legal actions as the best path forward to protect innocent life.”

“We know that their goal is to completely ban abortions without exceptions, and they’ve said that repeatedly. The governor is not going to stop until she is successful,” Wahls told The Daily Iowan.

“Iowa Democrats strongly support autonomy and freedom and believe we should trust Iowa women with when and how they should start a family,” Wahls said. “We’re going to continue to oppose [Republican measures], and if Iowans want abortion rights to be protected they should vote for Democrats this fall.”

“Iowa Democrats are working to protect reproductive freedoms at every level of government, while Kim Reynolds and Iowa Republicans will do everything in their power to outlaw abortion in our state,” Wilburn said. “This fight is not over – and I’m proud to stand alongside the Iowans organizing for a future where our personal freedoms are protected.”