After 14 years without a building, the Stanley Museum of Art will finally return in all its grandeur with its opening celebration on Aug. 26, with festivities continuing all weekend. 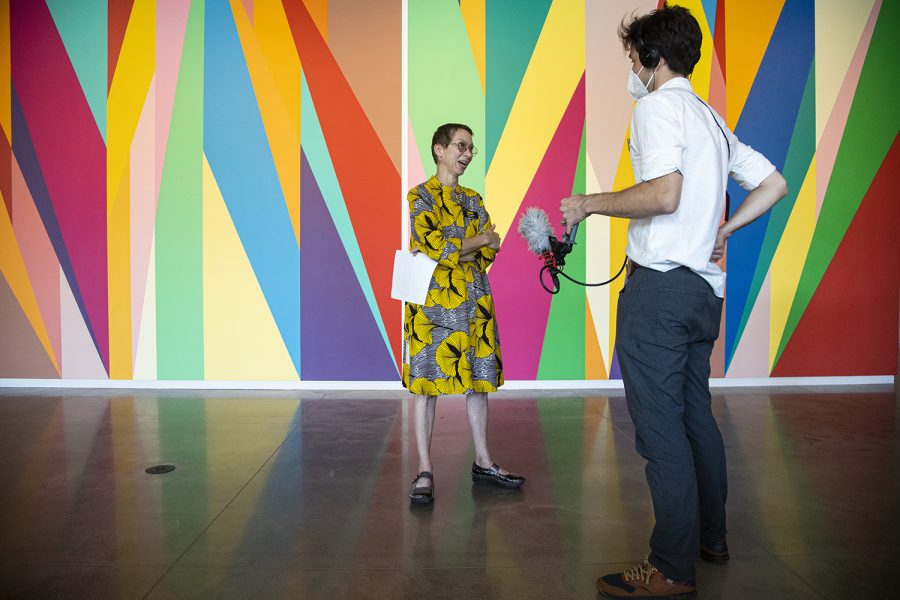 With tall, dark walls, and a sleek glass entranceway that one can’t help but stare up at as they approach, the Stanley Museum of Art’s prominent, fresh design makes a point of itself on the corner of E. Burlington Street and S. Madison Street.

The grassy space before it, laced with labyrinthine pavement, trees, and various sculptures, will soon overflow with attendees to a fest of art appreciation for the museum’s grand reopening.

The Stanley Museum’s new building will make its grand debut on Aug. 26 as the University of Iowa’s home of art. After tumultuous years of destruction, planning, and reconstruction after its ruin in the 2008 flood, the Stanley will shortly return as a hub for artistic education, enjoyment, and a plethora of future experiences.

With construction finishing up on Jan. 31, 2022, the original opening date was set for September, but was moved up to coordinate with the return of students and the first week of classes. Over the summer, Stanley Museum staff were in the process of moving a portion of the UI’s extensive art collection into the museum’s 16 extensive galleries, including its famous 1943 Jackson Pollock painting, Mural.

The festivities will kick off with a dedication from UI President Barbara Wilson and Stanley Museum of Art Director Lauren Lessing, which will also be live-streamed on the Stanley’s website. Additional speakers include Lynette Marshall, the president and CEO of the UI Center for Advancement, and Sherry Bates, the president pro tem of the state Board of Regents, as well as a handful of current UI students.

“We’re testing out a lot of things this weekend. We are having food trucks come and park outside the museum. That’s something that I hope we do all the time when we have public programs and events that draw a crowd,” Lessing said. “We’ll see how it goes.”

Shortly after, the citizens of Iowa City and surrounding communities will be able to walk the new galleries for the very first time, including the museum’s inaugural Homecoming exhibition — which features over 1000 individual pieces of art — as well as interact with curators.

Free refreshments and popcorn will be available all evening in Gibson Square Park, as well as art-making activities for attendees. There will also be a sizeable live music performance from bands Treesreach, Pictoria Vark, and Houndmouth, featured in collaboration with UI Scope Productions.

Performances will also continue on Aug. 27, with an afternoon of shows and lessons every hour from local dancer and juggler Luther Bangert in Gibson Square Park. The Cedar Rapids Opera is also to perform a selection from the The Grant Wood Operas: Stroke of Genius in the Stanley Museum’s versatile lobby space, preceded by another welcome talk from Lessing.

“The bands that are playing on Friday night, I just hope that we have a great turnout and it’s a big community celebration. The same goes for the DJ performance on Saturday,” Lessing said. “I really love the idea that we’re throwing a party for our community after all of these years.”

A performance from DJ Simeon Talley will finish off the second day of the museum’s grand opening festivities, with additional free food and beverages in the park, as well as food trucks available on Front Street, near the UI Main Library.

Tours of the Homecoming exhibition will run both Aug. 27 and 28, as well as additional open gallery time. The final day entails one last performance in the lobby by the Steve Grismore Trio.

RELATED: Stanley Museum of Art set to open next fall with inaugural collection

Highlights of the inaugural exhibition, which will last for three years, will include works from a variety of cultures and global artists. Less than one percent of the 17,000-piece UI art collection will be on display, yet still enough to fill the thousands of square feet of gallery space on the museum’s second floor.

In addition to Mural, which Lessing considers a centerpiece of the exhibition, she said she is also excited for attendees to see works of art from Grant Wood, Joan Mitchell, and Oliver Lee Jackson, among several others. Specific works that Lessing said will be making a comeback display include Sam Gilliam’s Red April and Max Beckmann’s Triptych.

Although the current exhibition will be on display for the next few years, it will have slight variations within the next few semesters. Ultimately, after over a decade of limbo, the Stanley Museum of Art will return, ensuring a solid future of art for the UI.

“I’m very, very proud of our inaugural exhibition, and so I hope that people love it. I hope that it also really surprises people, when they come in and they see the show,” Lessing said. “I hope they’re just blown away by some of the really innovative things that we’re doing in this exhibition. So first and foremost, I hope the show knocks their socks off.”