Since the first confirmed case of monkeypox in Johnson County last month, health officials at Johnson County Public Health and the University of Iowa Hospitals and Clinics are providing help to those most at risk of contracting the disease. 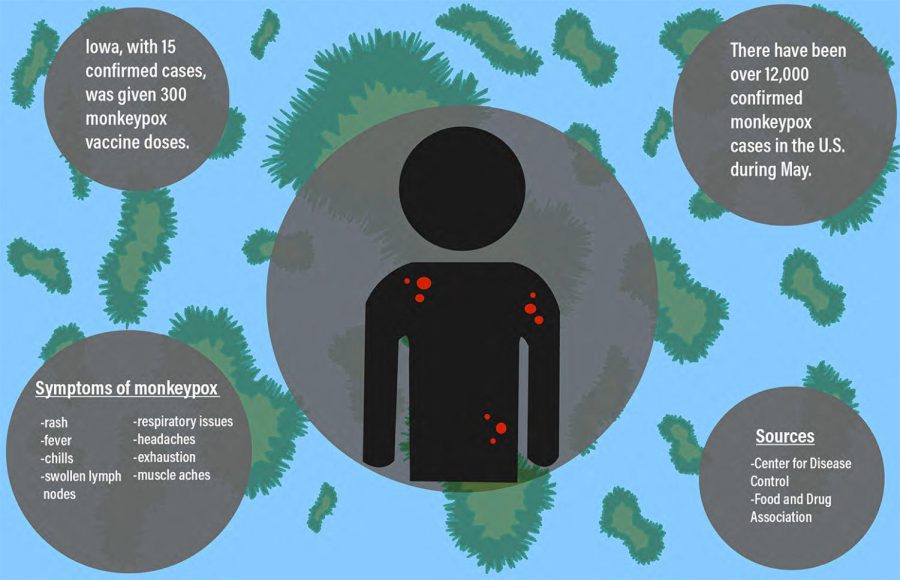 Cases of monkeypox are still low in the state, but Johnson County health officials are aiming to inform residents about the risk of the disease and provide monkeypox virus tests.

The disease — caused by infection with the monkeypox virus — was first reported in Iowa in July  and reached Johnson County later in the month.

Since reaching the U.S. in May, there have been over 12,000 confirmed monkeypox cases across the country, according to the Centers for Disease Control and Prevention.

Infection happens through skin-to-skin contact, body fluids, or touching shared items that have been in contact with bodily fluids or monkeypox rashes. Prolonged face-to-face contact also allows the virus to spread.

Karen Brust, an epidemiologist at University of Iowa Hospitals and Clinics, said men who have sex with men (MSM), are at the highest risk of contracting the disease.

“Anybody can get monkeypox, but the MSM population is more likely to acquire it,” Brust said.

About 99 percent of the 38,019 confirmed cases of monkeypox cases are among men, and at least 95 percent of those patients are men who have sex with other men, according to WHO official Rosamund Lewis.

Brust said she is working to make sure the correct information is going out to the MSM population so that they recognize the threat of the virus.

“There has been an effort to bring the message to that community in a way that doesn’t stigmatize, ” she said. “There is still an opportunity to message not just the MSM community, but the population at large to try and be aware of the situation before it becomes a bigger issue.”

Brust said UIHC has been offering tests for monkeypox, but not vaccines, which are being administered by Johnson County Public Health.

Karrey Shannon, a community health nurse at Johnson County Public Health, said the county received 20 doses of the Jynneos vaccine in July to cover those who had been directly exposed.

In July, the U.S. Food and Drug Administration allocated 800,000 doses of the vaccine to all 50 states based on confirmed cases and projections on how widespread the disease may be in the state.

Shannon said the 20 doses allocated to Johnson County was only to cover what was needed given the threat of the virus at the time.

“I think that the number of doses that we have available is completely in line with the actual risk of exposure within our area,” she said. “As the disease develops, and if we find more cases, we will have doses available to cover those people who are either directly exposed or at much higher risk.”

Shannon said Jynneos is a prophylactic vaccination, which is given to those who have been directly exposed but have not yet developed symptoms of monkeypox.

“If we can trace them within four days of exposure, we can offer vaccination to help prevent it,” she said. “If they do end up developing disease, we have been able to find that they end up having a less serious case of the disease, much the same as with Covid infections received after vaccination.”

Symptoms of monkeypox, according to the Center for Disease Control and Prevention, include rash, fever, chills, swollen lymph nodes, muscle aches, headaches, exhaustion, or respiratory issues. There is no schedule for how symptoms appear or in what order.

On Aug. 13, Johnson County Public Health held a vaccine clinic at Studio 13, a LGBTQ nightclub in Iowa City, for those deemed at much higher risk of contracting the virus.

Through a collaboration with the Linn County Public Health Department, who held a similar clinic at the Basix club in Cedar Rapids, Shannon said they were able to vaccinate 95 people.

“It’s a miserable disease, but not one that is life-threatening to many at this point,” she said. “Case counts are quite low, but will probably go up with the influx of new students, so right now we can try to educate the community on prevention and offer vaccination to those that are at highest risk.