The hockey club shook up its key staff ahead of its second season on the ice. 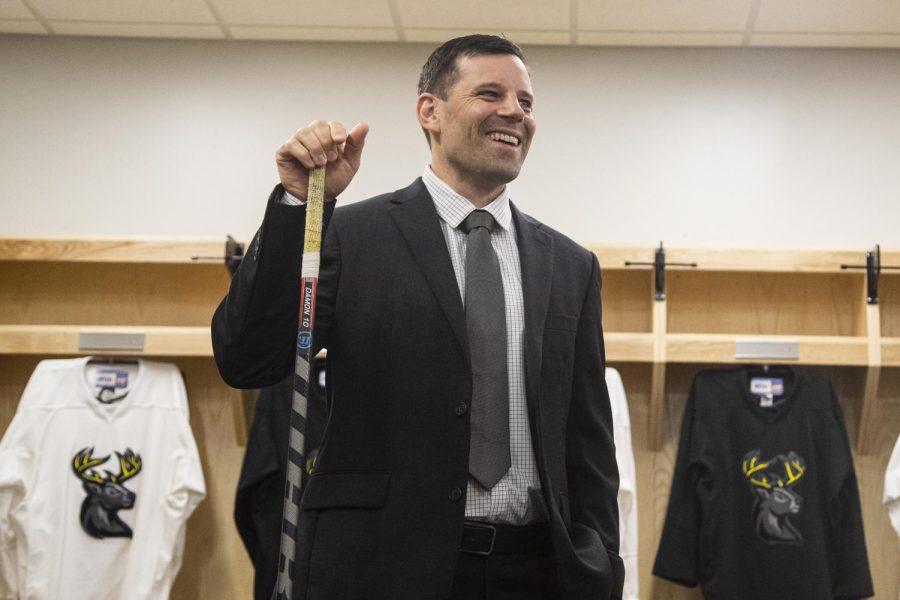 Derek Damon poses for a portrait during a press conference for the Iowa Heartlanders at Xtream Arena in Coralville on Tuesday, July 5, 2022. The Heartlanders announced Damon will replace former head coach Gerry Fleming as Fleming pursues opportunities overseas.

The Iowa Heartlanders have made numerous changes to their hockey operations staff and roster during its 2022 offseason.

The coaching staff looks different than it did in 2021-22, though there’s a familiar face now leading the bench.

As the Heartlanders head into their second season, they are returning 11 players and bringing in six new skaters.

Derek Damon, who served as the Iowa Heartlanders’ assistant coach last season, was promoted to head coach. Gerry Fleming, who coached the Heartlanders in 2021-22, left Iowa to coach a German club.

This is Damon’s first time as a head coach after he started his coaching career in 2020-21. He is also the Heartlanders’ general manager.

Jake Smith, Zach White, Yuki Miura, Cole Stallard, and Josh Koepplinger are back with the Heartlanders on ECHL deals. They accounted for just under 30 percent of the goals Iowa scored during its inaugural campaign. Smith led the league with 13 power-play goals.

Broetzman, Yakimowicz, and Campoli are all entering their first professional seasons after completing their college careers. Broetzman was a two-time captain at Michigan Tech, while Yakimowicz competed at Dalhousie University in Nova Scotia. Campoli comes to Iowa after his time in Upstate New York with Clarkson University.

The Heartlanders re-signed Connor Russell, Ryan Wheeler, and Jake Stevens. They also brought back Riese Zmolek, who was a Heartlanders alternate captain in 2021-22 and recorded four goals and 15 assists. Zmolek is on an ECHL contract for 2022-23 after playing under an AHL deal last season.

T.J. Fergus, who signed with the Heartlanders in 2021-22 but didn’t suit up last season, agreed to terms with Iowa.

Corbin Kaczperski, who led Iowa with 10 wins and a .921 saves percentage, re-signed with the Heartlanders for 2022-23. It’s possible C.J. Motte — who’s on an AHL contract with the Iowa Wild — joins the Heartlanders.

Iowa begins the regular season on Oct. 21 against the Idaho Steelheads at Xtream Arena.