Pato O’Ward took advantage of a caution and restart after leader Josef Newgarden crashed in the 235th lap. O’Ward took the lead and never let it go. 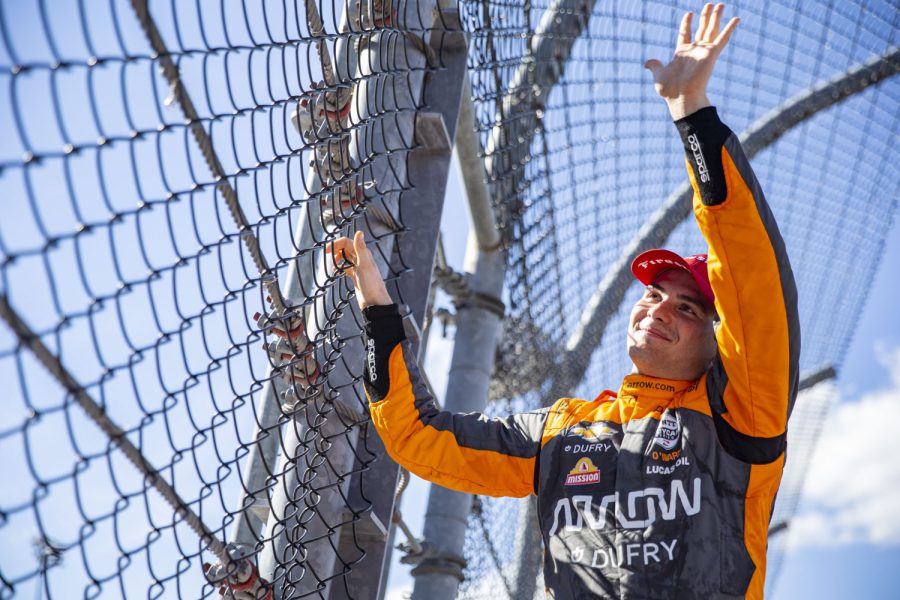 Through 234 laps of Sunday’s Hy-Vee Salute to Farmers 300 at Iowa Speedway in Newton, Iowa, Josef Newgarden was in prime position to take his second IndyCar victory in as many days. Then things went sideways.

Newgarden’s car malfunctioned, crashed into the wall, and Saturday’s champion had to drop out of the race.

Newgarden, from Nashville, Tennessee, had won the Hy-VeeDeals.com 250 less than 24 hours earlier and was at the front of the pack again before something onboard — Penske teammate Will Power said it was suspension — failed and he veered from the inside of the track up into the wall.

Newgarden, who appeared healthy and alert after the incident, was well enough to be interviewed on the NBC broadcast after he was checked and released from the infield care center.

“Yeah, that was definitely a bit of a shot,” Newgarden said, visibly emotional. “I want to cry. I’m so sad for my team. I don’t know what happened.

“Everything felt fine to me up to that point,” Newgarden continued. “I did have a vibration at the start of that stint. It’s always possible to have a mismatched set [of Firestone tires], but that was totally unexpected when it happened, and it caught me by surprise.”

At the conclusion of the race, Newgarden fainted in the bus parking lot, was checked again by the infield care center, and appeared alert, but was airlifted to a Des Moines hospital as a precaution.

According to The Washington Post, Newgarden, cut open the back of his head when he fell and was moved to Des Moines because the infield care center did not have the right equipment to evaluate him.

Newgarden’s crash, however, opened the door for Mexico’s Pato O’Ward to snatch the win.

After a third-place showing on Saturday, the McLaren driver beat out Power — who finished second yesterday — by four seconds.

It marked O’Ward’s second win of the year and fourth of his career.

He had been running second behind Newgarden for a while before the crash and never relinquished the lead after the caution was lifted.

“I knew we had the pace to win one,” O’Ward said following the victory. “The problem was just trying to get up to Josef, and one thing is getting up to him and one thing is passing him … We took advantage of the opportunity that presented itself and walked away with it. I knew we had the pace to do it, it’s just about being in the right situation.”

Sunday’s win gave O’Ward his eighth podium finish in his last 10 races on oval tracks, he credited his team for that success.

“I think the team has a great package in the ovals,” O’Ward said. “I think that’s definitely our strong suit … I think we go to every oval believing that we can beat anybody.”

O’Ward’s win earned him 51 championship points and moved him from sixth to fifth in the standings. The top six drivers are now separated by just 44 points. Sweden’s Marcus Ericsson leads with 403 points and O’Ward has 367.

“I think the biggest thing everybody [who is] fighting for the championship is having good weekends,” O’Ward said. No one’s having bad weekends.”

The IndyCar series will head to Indianapolis next weekend for the Gallagher Grand Prix, one of five races left this season.