On July 22, the pop-punk band Beach Bunny released their new album Emotional Creature. This album is fast-paced and fun in sound, but doesn’t shy away from taking on depth in its lyrics — Beach Bunny depicts the anxiety of one's sexuality being exposed, among other themes. 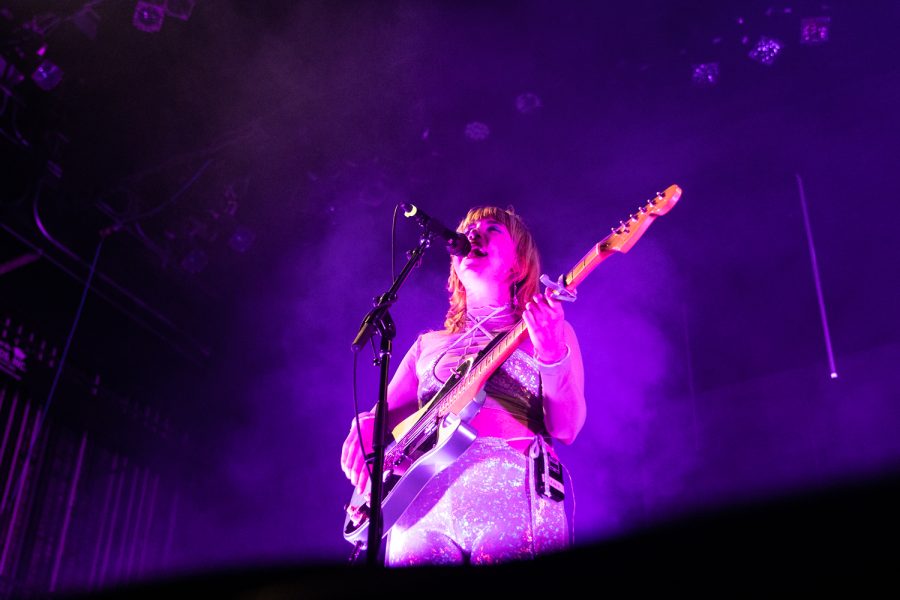 Beach Bunny's Lili Trifilio sings at the Englert Theatre as part of the Mission Creek Festival in Iowa City on Friday, April 8, 2022.

Beach Bunny brought one of their staple pop-punk concerts to Iowa City on April 8 with Mission Creek Festival. On July 22, the band released “Emotional Creature,” the same album they teased during the festival.

Back in April, I sat in Englert Theatre, listening to lead singer Lili Triflio sing some of the unreleased songs from “Emotional Creature,” leaving me excited and hopeful about the new album.

In “Emotional Creature,” Beach Bunny provides a reinvented, mature incarnation of the pop-punk “riot grrl” 2000s sound that I adored growing up. I appreciate the added level of lyrical depth that Beach Bunny contributes to the sub-genre, as too often, pop-rock can get away with lazy lyrics. You can certainly hear the 2000s influence in the way that the song “Entropy” opens.

Despite the anxiety surrounding the repeated threat of getting discovered, this is an upbeat love song. It’s about how this person makes her not care about the risk, and makes her more proud of who she is. This is shown when she states that she wants to kiss the love interest in the lyric “where everyone’s watching,” and finally show people the truth.

“Eventually,” was the second song on the album and one of my favorites. The song’s chorus and its heart lies in the lyric “The faster I run from the problem, the harder I fall, it all comes out eventually.” It is straightforward, and I agree with the message. So, all around, this song was a pleasant surprise.

“Weeds,” was another of my favorites, and is focused on the idea of having to learn to love oneself before you can love another. I loved the opening: “I’m tired of being anxious, broken, choking on my tears, I let the same old problems steal away my years.”

I appreciated the candidness of this song, such as the lyric “’Cause he’s not the problеm, the problem is you think you’re only viable for love when someone makes you feel complete.” It felt like a call out of herself, as she breaks down her desire to ‘beg a boy for help’ instead of just learning to love herself.

“Scream” sounds like a continuation of “Entropy.” The chorus of this song was what really brought me in: “I feel uneasy, internal conflict, my head and my heart try to rephrase the argument as ‘You didn’t feel that,’ now I feel gaslit, torch my emotions, please change the subject.” I understand the struggle of self-gaslighting, and appreciate the acknowledgment of it.

Overall, this album is a really strong addition to Beach Bunny’s discography. When I went to Mission Creek Festival, I knew Beach Bunny as a Tiktok artist, and possibly a one-hit-wonder. If anything is clear by now, it’s that Beach Bunny is just getting started.