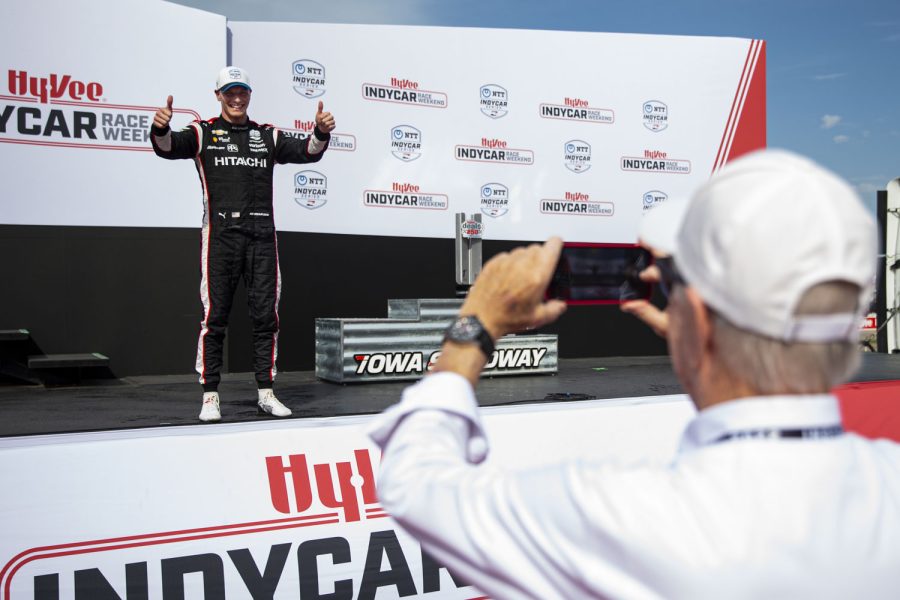 Roger Penske, owner of Team Penske, takes a picture of his driver, Josef Newgarden (2), after the NTT IndyCar Series HyVeeDeals.com 250 presented by DoorDash at Iowa Speedway in Newton, Iowa on Saturday, July 23, 2022. Newgarden finished first and his teammate Will Power (12), finished third.

Josef Newgarden led 208 of the 250 laps on Saturday afternoon at Iowa Speedway and took the title at the Hy-VeeDeals.com 250.

The win marked Newgarden’s fourth of the season and fourth career victory at Iowa Speedway. Newgarden won the second race of IndyCar’s stop at Iowa Speedway in 2020, the last time Iowa fans saw the circuit.

While he was happy with his race today, he said he’s had an up-and-down season in 2022. Newgarden has only one other top-five finish to accompany his four victories and is not leading the points race. He is in second place, 15 points behind Sweden’s Marcus Ericsson.

“It’s been a frustrating year in some regards,” Newgarden said following the victory. “But it’s been tempered with great results. We’ve had four wins and I feel like we’ve shown up at most of these weekends capable of winning the race. Fortunately, four of them have worked out pretty nicely but it’s either working out like that or it’s going sideways to some degree.”

Newgarden said some of the issues have been due to bad timing with cautions and with pit stops, but he said when his team gets the timing correct, they win the race.

“If we could just find the middle ground there, I think we’d be pretty handily in the points lead, but we just can’t seem to find that balance right now,” Newgarden said.

Newgarden noted that he doesn’t think his team needs to change much because when everything goes according to plan, he gets victories.

Newgarden’s pit crew was the second-best team of the day only behind Will Power’s crew. Earlier in the week, the makeup of Newgarden’s team was up in the air.

“Kyle LaPier my [left-front tire man] about died two days ago,” Newgarden said. “He was mowing his lawn when he got attacked by a hornet nest, was in the hospital about 24 hours ago, just got released. I don’t know how he showed up here and pitted my car, but he did … You ask me about my pit crew, I say Kyle LaPier, what a champion.”

Newgarden, from Nashville, Tennessee, was followed on the podium by Mexico’s Pato O’Ward in second and Power of Australia

O’Ward got into silver-medal position late in the race, passing Power who was one spot behind leader for almost the entire race.

O’Ward picked up 40 points in the season-long standings, something he was very happy with.

“Really solid points day for us today,” O’Ward told the media. “I thought we had a little more for Josef there at the end but he was really strong.”

Power, who began the day in pole position, had trouble with his car during the race and was pleased to snatch a podium finish.

He said he had issues with one of his tires that went very loose. He said he had to make multiple “big saves.” during the competition.

Power and Newgarden will start in the first and second positions tomorrow just like they did this afternoon.

Tomorrow’s Hy-Vee Salute to Farmers 300 will begin at 2 p.m. and will air live on NBC.