McCaffery led the Hawkeyes to 26 victories — the most for the program since 1987 — and a program-record 16 conference wins. 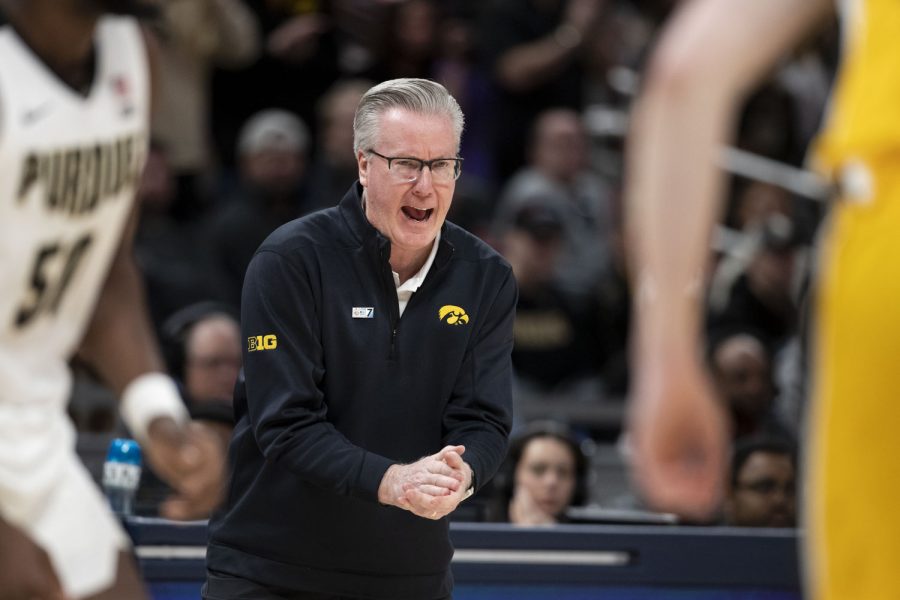 Iowa head coach Fran McCaffery yells during the 2022 Big Ten Men’s Basketball Championship between No. 5 Iowa and No. 3 Purdue at Gainbridge Fieldhouse in Indianapolis on Sunday, March 13, 2022. The Hawkeyes defeated the Boilermakers, 75-66.

Iowa men’s basketball coach Fran McCaffery is The Daily Iowan’s pick for Coach of the Year.

In his 12th season at the helm, McCaffery led a squad many believed to be an NCAA Tournament bubble team to 26 wins — the most for the program since 1987 — 16 conference wins — a program record — a Big Ten Tournament Championship, and a No. 5 seed in March Madness.

And the Hawkeyes were supposed to be fighting for a tournament spot, not setting records.

After Iowa was picked to finish ninth in the Big Ten by ESPN, McCaffery’s team posted a 12-8 regular-season conference record to finish fourth in the league. Then Iowa collected four victories in four days to win the Big Ten Tournament for the first time since 2006.

Iowa ended the season with 12 wins in its last 15 games including a five-game winning streak from mid-February to early March.

The Hawkeyes’ first tournament title in 16 seasons came a year after 2021 Wooden Award Winner Luka Garza and sharpshooter Joe Wieskamp both left for the NBA, while C.J. Fredrick and Jack Nunge each transferred.

In those four departures, McCaffery lost 64 percent of his team’s scoring and three of his top four offensive options.

In 2021-22, with four new starters in the rotation to go with Jordan Bohannon, Iowa won four more games than the previous year and climbed as high as No. 24 in the AP Poll and No. 21 in the Coaches Poll.

During 2021-22, Bohannon remained a starter and Joe Toussiant stepped in as his backcourt mate before Tony Perkins took that role later in the season.

Due in large part to Murray’s historic season — in which he averaged 23.5 points per game and 8.7 rebounds per contest — Iowa’s scoring average went down by less than a point after Garza’s departure.

Following an 82-71 road victory over Michigan on March 3, coach McCaffery told media members he tries to instill confidence in his players with a mindset free of indecision.

“I want you to think for yourself if you’re playing for me,” McCaffery added. “Think for yourself, go make a play. I don’t expect perfection, it’s not a game of perfect, so if you make a mistake run back, guard your man, don’t let him score, it’s no more complicated than that.”