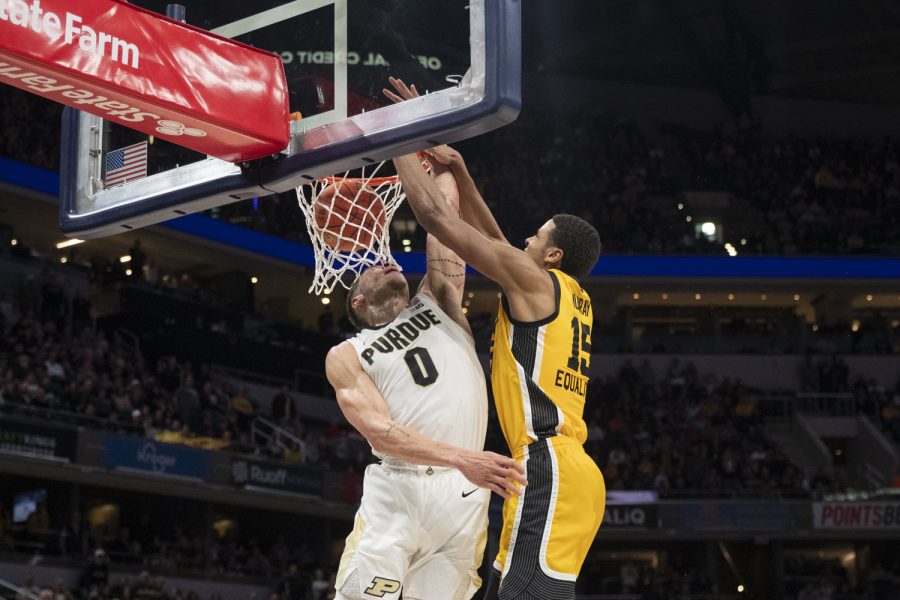 Iowa forward Keegan Murray dunks a ball during the 2022 Big Ten Men’s Basketball Championship between No. 5 Iowa and No. 3 Purdue at Gainbridge Fieldhouse in Indianapolis on Sunday, March 13, 2022. Murray led the team in scoring with 19 points, getting awarded the Big Ten Tournament Most Valuable Player. The Hawkeyes defeated the Boilermakers, 75-66.

Murray, who played two seasons in Iowa City, averaged 23.5 points per game as a sophomore — good for fourth in the nation. He also grabbed a team-leading 8.7 rebounds per game.

Murray was a consensus first-team All-American, the Karl Malone Power Forward of the Year,  a first-team All-Big Ten selection, and the Big Ten Tournament’s Most Outstanding Player.

Murray became just the second player in NCAA history to score 800 points, make 60 3-pointers, and record 60 blocks in a single season. Texas’ Kevin Durant is the only other player to ever achieve the feat.

“Murray might have been the best overall player in the country last year on both ends of the floor,” ESPN NBA Analyst Jay Bilas said Thursday. “I think he’s the most efficient player in this draft and the most NBA ready to plug in right now.”

“His basketball IQ is tremendous, very smart,” Bilas added. “He’s got a great feel. He makes really good reads. He pursues the ball …  He can handle it. He can change speeds. He drives it either way to the point of seeming ambidextrous, and he shoots 40 percent from three, so he’s a good shooter. He’s excellent out of the post.”

“He reminds me a little bit of Pascal Siakam,” former NBA player and ESPN television host Kendrick Perkins said of Murray. “Able to take advantage of little guys when he has the mismatch, exercise his length. [He knows] how to play his role. Active on the defensive side turning it into transition points. What I like about Keegan Murray is his size, his athleticism along with his IQ, and his feel for the game.”

Murray will likely join a Kings roster built around point guard De’Aaron Fox. Sacramento traded the forward Marvin Bagley, the 2018 No. 2 overall pick, to Detroit before the trade deadline, leaving a hole in their frontcourt rotation behind All-Star Domantas Sabonis.

Sabonis and Harrison Barnes are the only two established forwards on the current roster, so Murray will likely fill a starting role and play as a wing player.

Perkins also said Murray will be a good addition to the Kings’ roster alongside Fox. Perkins called the wing “the most important position in today’s NBA.”

Murray joins Chuck Darling, John Johnson, and Fred Brown as the only Hawkeyes taken in the top 10 of the NBA Draft.

Murray is the third Iowa player to be drafted in the last two seasons as both Joe Wieskamp and Luka Garza were selected in 2021.