Murray is a surefire lottery pick, and most experts see him as a top-10 selection, but what situations are most likely, and what would be best for the former Hawkeye’s career? 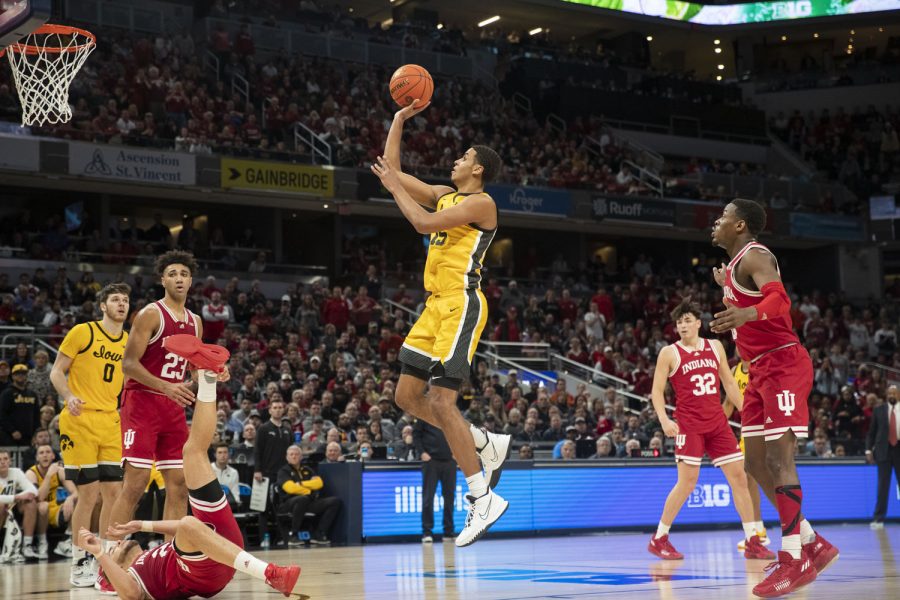 Iowa forward Keegan Murray shoots a layup during a men’s basketball game between No. 5 Iowa and No. 9 Indiana in the Big Ten Basketball Tournament Semifinals at Gainbridge Fieldhouse in Indianapolis on Saturday, March 12, 2022. The Hawkeyes defeated the Hoosiers, 80-77. Murray led the team in scoring with 32 points, going 11-17 from the field. (Dimia Burrell/The Daily Iowan)

Keegan Murray was one of the most dominant college basketball players in the nation last season, averaging 23.5 points per game while shooting 55.4 percent from the field. The 6-foot-8 Cedar Rapids product led the country with a 38.2 player efficiency rating and added 8.7 boards and nearly two blocks a night en route to AP first-team All-America honors.

Murray announced his decision to enter the NBA Draft via Twitter on March 29. Throughout the draft process, he has been considered a lottery lock, with many experts predicting he will be picked in the No. 4-9 range.

The Daily Iowan breaks down each of Murray’s potential landing spots:

The Kings’ roster revolves around guard talent with little help on the wings. They traded the 2018 No. 2 overall pick, forward Marvin Bagley, to Detroit before the trade deadline, leaving a hole in their frontcourt rotation behind All-Star Domantas Sabonis.

Sabonis and Harrison Barnes are the only two established forwards on a roster centered around young point guard De’Aaron Fox. Selecting Murray at pick No. 4 makes a lot of sense for the Kings.

On paper, Murray would provide them with a solid scoring wing for years to come. The 2021-22 Big Ten Tournament’s Most Outstanding Player is capable of sliding down to power forward so head coach Mike Brown would be able to play small ball with Sabonis at the five when necessary.

Drafting Murray could give the franchise a financial reset as well: the Kings could move on from the 30-year-old Barnes and get his $20 million-plus salary off the books.

It’s looking more and more likely that the Kings will draft Murray. For weeks, the Kings’ front office was widely expected to either trade out of the pick, or draft whichever of the consensus top four prospects remain: Chet Holmgren, Paolo Banchero, Jabari Smith, Jr., or Jaden Ivey. However, recent reports claim Sacramento is high on Murray. The odds that Murray will be a King seem to be rising.

The Pistons’ nucleus is last year’s No. 1 overall pick, Cade Cunningham. The team has tried to surround their exciting young guard with snipers, and they have several decent shooters on the roster already.

Murray would be an ideal fit for the Pistons’ current lineup, as Detroit already has two solid forwards in Saddiq Bey, and Hamidou Diallo. Minutes have opened up for Murray after the Pistons traded Jerami Grant to Portland.

In that scenario, Murray would likely split minutes at small forward and power forward, sharing time with Bey, Diallo, Kelly Olynyk, and the aforementioned Marvin Bagley.

Murray’s fit with the Pistons is intriguing, as he could become Cunningham’s running mate for the next decade-plus and provide the franchise with another much-needed perimeter threat opposite Bey. This is probably Murray’s most likely landing spot.

The Pacers organization pulled off a huge move at last year’s trade deadline, trading All-Star forward Domantas Sabonis to Sacramento for point guard Tyrese Haliburton and other compensation. They now have a promising young core centered around Haliburton moving forward.

Guards Chris Duarte and Buddy Hield are 3-point snipers, but the team saw struggles from the 3-point line as incumbent T.J. Warren missed the entire 2021-22 season with a foot injury.

Indiana may be the best overall landing spot for Murray’s development as a player — he would step in as one of the best scorers on the team and a cornerstone for the future from day one, and the team’s front office has reportedly hosted him for a private meeting.

The Blazers struggled last season without the presence of star guard Damian Lillard, who missed most of 2021-22 with a core ab muscle injury.

The team traded Lillard’s longtime backcourt running mate C.J. McCollum to New Orleans before the deadline and finished with a 27-55 record on the back of late-season surges from Anfernee Simons and Josh Hart.

Lillard turns 32 in July, and the Portland front office appears to be dead-set on maximizing his time in a Blazers uniform. Murray would be a low-maintenance wing option for a team that lacks consistent shot creation and possesses limited perimeter shooting from the forward positions.

Murray could very well be the best available option at No. 7, as he has one of the highest ceilings in the Draft — an attribute that Portland GM Joe Cronin could see as a major positive as he tries to build a playoff-ready team around Lillard. The fit here is extremely enticing, and it’s very likely Murray is headed to the City of Roses if he falls to the seventh pick.

All five of those players have shown the capability to play at least two positions in the frontcourt, which would leave Murray battling for minutes behind two All-Stars in Ingram and Williamson (if healthy). The fit here is non-existent, so it is very unlikely that the Pels draft Murray barring a draft-day trade freeing up minutes for him.

This could be a very intriguing fit for Murray.

San Antonio’s roster is headlined by point guard Dejounte Murray (no relation) and a plethora of young wings with potential (including some guy named Joe Wieskamp).

If drafted to the Spurs, Murray would immediately be one of the two best forwards on the team in addition to Keldon Johnson, and could very well begin the season in the starting lineup at the small forward position.

He would have every opportunity to create his own shot within the Spurs’ free-flowing motion offense. San Antonio could be the best landing spot for Murray, and the Spurs are reportedly considering a trade to move up and select him.

If he falls to No. 9, it is almost impossible for the Spurs to pass up the value they would be getting with this pick. That said, odds are that Murray won’t be available at this point in the draft, so he probably won’t end up in San Antonio.