Following feedback from fans, the University of Iowa announced Wednesday that each week’s Kid Captain will assist in choosing what song will complement the Hawkeye Wave at Kinnick Stadium. 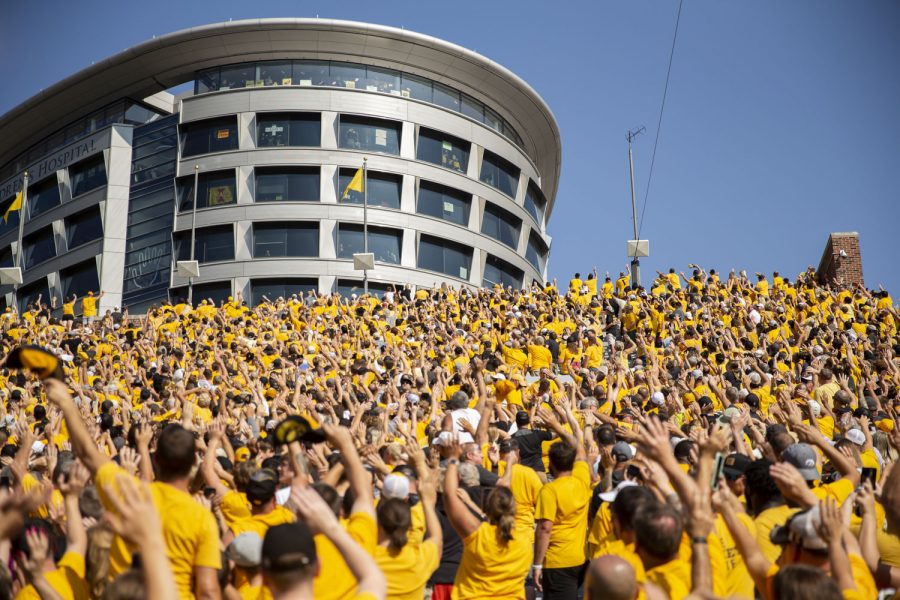 Fans wave to University of Iowa Stead Family Children’s Hospital during a football game between Iowa and Kent State at Kinnick Stadium on Saturday, Sept. 18, 2021. The Hawkeyes defeated the Golden Flashes, 30-7.

When the University of Iowa received suggestions from fans regarding what new song should accompany the Hawkeye Wave, there was a regular response.

The University announced Wednesday in a release that for  at Kinnick Stadium, the UI Department of Athletics will ask that week’s Kid Captain to help choose a song that will compliment the Hawkeye Wave.

According to the release, the Kid Captain program was established in 2009 to recognize UI Stead Family Children’s Hospital patients. On top of getting exclusive behind-the-scenes access, each Kid Captain gets a commemorative jersey and special recognition from the hospital and football team.

The Hawkeye Wave, which started in 2017, entails fans, players, and coaches inside Kinnick Stadium exchanging waves with the patients and families inside the children’s hospital.

For most of the waves, country music artist Pat Green’s “Wave on Wave” blared from Kinnick Stadium’s speakers . But after five seasons, the UI declared on April 21 it wanted public feedback to help select a different song.

Peter Matthes, UI vice president of external relations and senior advisor to the president, said in the release, that after five years, it’s time for kids to choose the song for the Hawkeye Wave.

“The children are the true heroes, so the choice is theirs,” he said. “That is something we can all agree on, and I cannot thank our fans enough for their input, engagement, and generosity.”

The first Kid Captain selected song will debut when Iowa takes on South Dakota State on Sept. 3 at Kinnick Stadium.