Through the ‘Mi Casa, Your Casa 2.0’ traveling exhibit, the Iowa City Downtown District looks to raise money for affordable housing in Johnson County and support public art for the community. 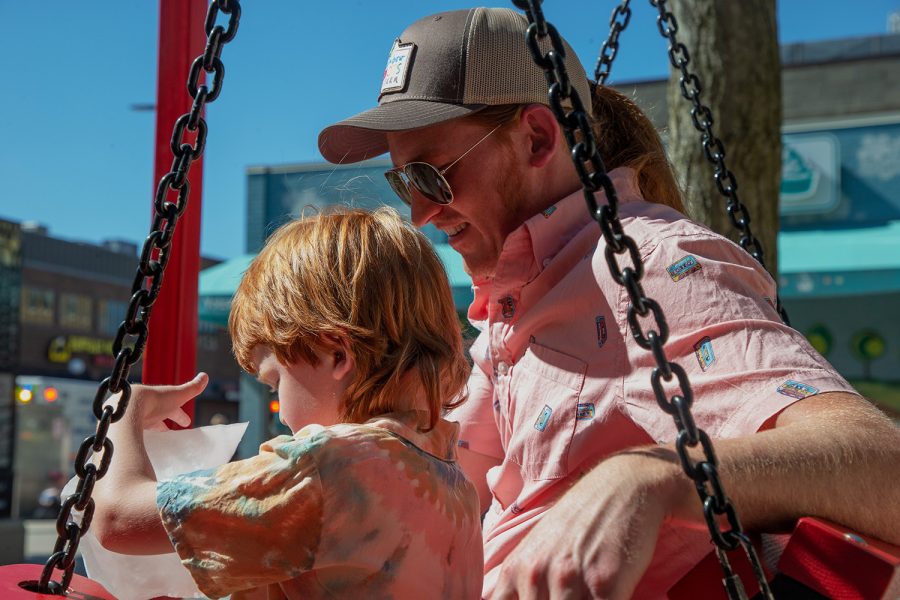 Iowa City resident Lee Huisinga and his son Jack sit on the swing installation on the pedestrian mall in Iowa City on Saturday, June 18, 2022.

Scattered across the downtown Iowa City area, the Mi Casa, Your Casa 2.0 interactive art exhibit is found entertaining families and friends as they explore the Pedestrian Mall. With red beams in the shape of a home holding up a bench swing, the exhibit has been put to use by Iowa City community members.

The Mi Casa, Your Casa 2.0 exhibit, which was installed on June 10 and will be taken down by July 11, was created by Latin American artists Hector Esrawe and Ignacio Cadena. According to a press release from the Iowa City Downtown District, the artists were inspired by mercados in Latin America, which are bustling street markets that foster a great deal of human connection.

Betsy Potter, the director of creative services with the Iowa City Downtown District, said the exhibit comes from a collaboration with Creos, an organization focusing on sharing artwork at an international level.

The Iowa City Downtown District collaborated with Creos in the summer of 2021, making this the second time the two organizations have collaborated.

Potter said working with Creos is one of several ways the downtown Iowa City area is able to fulfill its goal of investing in public art for the community.

“It’s part of our core mission and our core strategic plan that we invest in public art,” Potter said.

Potter said the community interaction with the swings has been especially engaging. Because of the nature of the exhibit, Potter said it is easy for someone walking in the Pedestrian Mall to see the exhibit and decide they want to hop on one of the many swings.

“Anyone of any age can get on the swing, engage, and it brings a smile to your face,” Potter said. “It’s a good opportunity to sit and swing and enjoy the Pedestrian Mall in a different way than normal.”

This project was sponsored by the Community Foundation of Johnson County (CFJC). Shelly Maharry, president and CEO of CFJC said their organization finds it important to invest in public art for the community.

Maharry also said the nature of the exhibit resonated with work her organization does with housing in Johnson County. She said for every post tagging @downtowniowacity, or using #downtowniowacity or #micasayourcasaic, $1 will be donated to the JoCo Affordable Housing Coalition. The CFJC plans to match any community donations as well.

“We really saw that as a metaphor for housing and how to use that piece of art to spark a conversation about affordable housing and make it a fun way to connect that issue with this beautiful public art that we have installed downtown for a brief period of time,” Maharry said.

One of the things resonating with Maharry since the opening of the exhibit is its popularity among the public. While the donations are a positive additional factor, the positivity the exhibit spreads is also one of the reasons her organization decided to sponsor the art.

“I was struck by the multigenerational use,” Maharry said. “We saw children with their grandparents, brothers, sisters, and parents using the art, but also capturing those pictures. And we can just imagine that those pictures are going to live on for a long time in those families.”