Iowa volleyball planning to build on spring success in the summer

Though the Hawkeyes won’t hold official practices in the summer, the full roster will be on campus for workouts to improve the program. 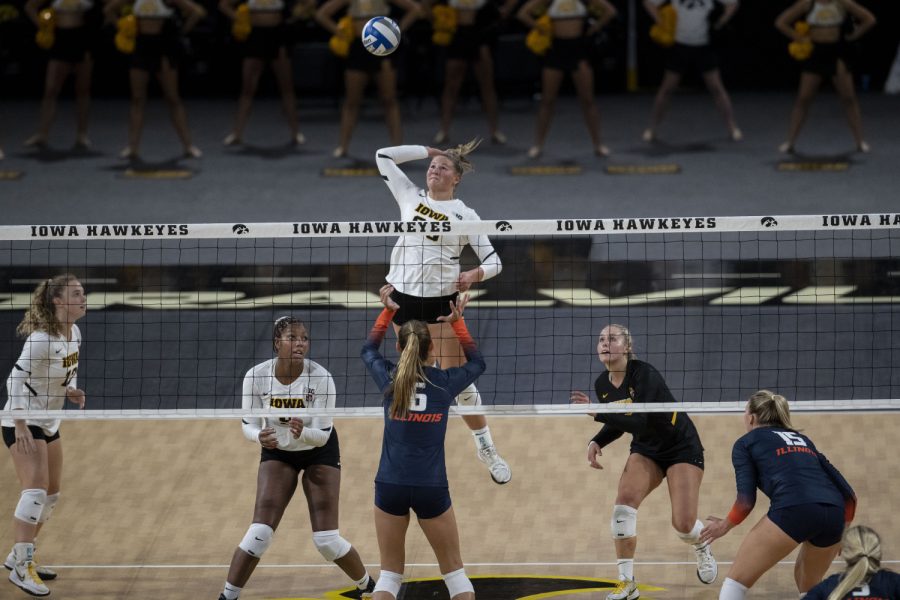 Iowa outside hitter Addie VanderWeide hits the ball during a volleyball game between Iowa and Illinois at Xtreme Arena in Coralville, Iowa, on Wednesday, Sept. 22, 2021. The Fighting Illini defeated the Hawkeyes with a score of 3-2.

Though the Iowa volleyball team begins its regular season in August, the Hawkeyes plan on continuing their spring success into the summer.

Under head coach Jim Barnes, whom Iowa hired in December, the program is in a transition phase after finishing with a 6-24 record in 2021.

In Barnes’ first semester in Iowa City, the Hawkeyes initially started with five student-athletes who weren’t in the transfer portal. That number grew to 10 within two weeks, though one didn’t participate in the spring scrimmages.

“What stood out is how the team just really bought into the way we want to play and how we work and how we practice,” Barnes said. “Then they took that into the scrimmages we had, and we won almost every game we played this spring.”

Sophomore outside hitter Addie VanderWeide said because of their limited roster, the Hawkeyes played different positions than usual throughout the spring.

“I think that made it almost more fun in a way because we were just super relaxed,” VanderWeide said. “We could spend time together and enjoy every game that we played, and it wasn’t super high-stakes, high-pressure. So I think that was really good, and I think we improved with every match that we played.”

Starting June 27, the full roster will be on campus for summer workouts, which includes seven new transfers and two freshmen.

“We can’t, as coaches, get in the gym with them until August,” Barnes said. “But [the summer] is an important time to get together and work together.”

Barnes said strength and conditioning coach Zach Walrod is allowed in the weight room with the players and expects him to direct student-athletes four to five times a week. With the team’s foundation established in the spring, Barnes anticipates returning players to help the newcomers understand Iowa’s systems during open gyms.

“We’ll get to do more things outside with each other like bonding moments and stuff,” senior libero Mari Hinkle said. “It’ll be really nice in the fact that everyone has to be here during the summer. It’ll be really nice to get to know the new girls and everything before the season starts.”

The 2022 Hawkeyes will showcase their talents in front of a crowd for the first time in the fall when they host the Black and Gold Scrimmage at Xtream Arena on Aug. 20. To commence the regular season, Iowa is slated to partake in 11 non-conference matches. Two of those opponents — Washington and Iowa State — qualified for the NCAA Tournament in 2021.

“I think just having that high competition right from the beginning is really going to be good for us,” VanderWeide said. “…it’s going to help us prepare in the best way that we can for conference play.”