Iowa soccer freshman Kellen Fife to compete as outside forward

The Hawkeyes recruited Fife as an outside back, but she showed promise on the front line during spring practice. 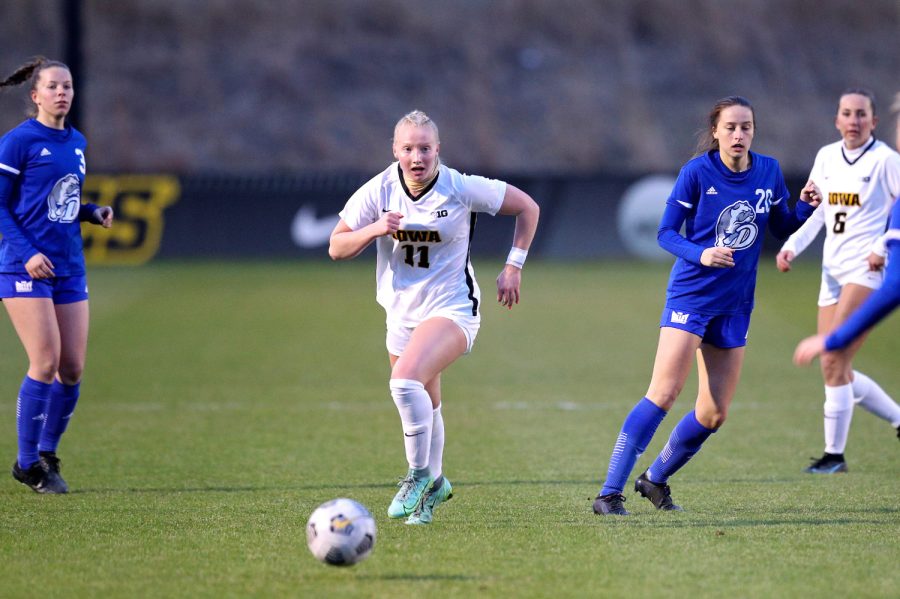 The Iowa soccer team recruited freshman Kellen Fife as an outside back but knew her versatility created the opportunity for a possible transition into the frontline.

And that’s what happened.

During her first semester at Iowa, Fife spent the spring practicing in multiple positions, including outside forward. Iowa head coach Dave DiIanni said the freshman from Bloomfield Hills, Michigan, will compete as an outside forward in the fall.

“She likes to score goals,” DiIanni said. “She wants to attack and take players on and she’s combative. And I think on the field those qualities came out quite a bit this spring.”

Fife said her biggest asset to the Hawkeyes during the spring as a forward was her ability to use both feet.

When competing on the right side, she would cut into the middle of the pitch with her left foot, which allowed her to tally a goal in one of Iowa’s spring exhibition matches.

Changing positions is nothing new for the freshman. While Fife mainly played outside back for Vardar ECNL, a club team, she would often move to center midfield in attack, or play forward when her team was trailing

“I played for Corktown, which is a college summer league team here in Michigan last summer, and I got some time at center forward in a game there and actually scored two goals there,” Fife said. “I’ve played pretty much everywhere [on the field] my whole life.”

Despite her experience, Fife said it was a challenge for her to adjust at Iowa, but she gained confidence and motivation throughout the semester. DiIanni told Fife the coaching staff moved her to the front line because she could get the job done.

The Hawkeyes also inserted the health and human physiology major into an offensive role because they needed depth in that area. Alyssa Walker, a forward who recorded a team-high nine goals in 2021, signed a professional contract in Sweden after her lone season with the Black and Gold.

With Fife in the mix, the Hawkeyes are seeking to boost their 1.55 goals scored average, which ranked eighth in the Big Ten last fall.

Fife said coach DiIanni is focused on the team looking to be aggressive, looking to score, and not worrying about making mistakes.

“If you are looking to go forward and looking to score, then he is fine with that,” Fife said. “…my biggest focus for this summer and going into the fall is just making sure that I’m trying to score and create chances for my team now that I’m playing forward.”

Fife will train with the Hawkeyes when summer workouts begin on June 27 before she participates in her first collegiate fall practices.

The Hawkeyes open the 2022 regular season at UCLA on Aug. 18, which will likely be Fife’s first official contest at the college level.

“The fall season is much more about winning than being developed as a player,” Dilanni said. “But the fact that she was able to already go through the transition in terms of balancing off the field, in the classroom, and on the field this spring, I think she’s going to be an integral part to our success this fall.”