Hall started creating T-shirts with the words “Unbreakable Female Athlete” on the front after she searched for a shirt with an empowering message for female athletes and couldn’t find one. 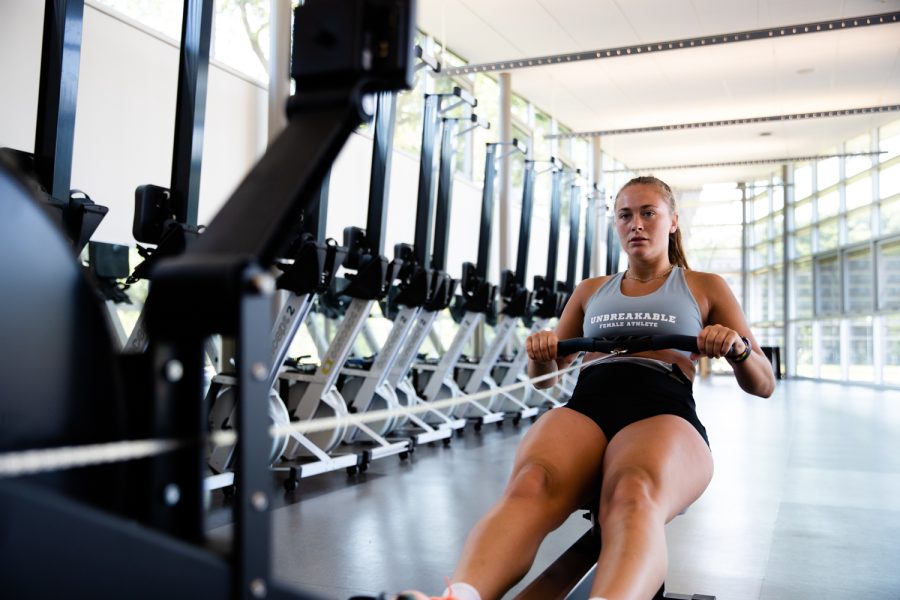 Iowa rower Jaecee Hall works out on a rowing machine at Beckwith Boathouse in Iowa City on Sunday, June 20, 2022.

Iowa rower Jaecee Hall is ready to lead a charge.

The rising junior from Ankeny, Iowa, has been a standout athlete ever since she joined the Iowa Rush soccer program at age 3. While playing for various travel and national teams, her soccer talent took her around the world to places like Costa Rica, Belgium, England, and France before she stepped foot on the field for Ankeny Centennial High School. At Centennial, she helped lead the team to a state title in 2018.

Throughout her travels, she was an astute observer both in the U.S. and abroad. Hall has watched female athletes be perceived as lesser-than by some male athletes and fans, receive far less major media coverage than male athletes, and have to constantly prove their worth in the sports world.

Now, Hall is ready to change that narrative and empower female athletes nationwide one shirt, hat, or hoodie at a time.

Before a March rowing practice last season, Hall was looking online for a shirt that illustrated what it meant to be a female athlete. After she couldn’t find one, she decided to make a T-shirt herself.

What started as a one-off tee has now turned into a brand that is spreading in Iowa as well as across the country.
The message
After Hall decided to design her own practice shirt, she had to figure out how she wanted it to look. How did she want to represent female athletes?

She said that at her kitchen table, she realized she wanted the shirt to say “Female Athlete,” but she wanted a word that represented a message of empowerment and courage to complete the design.

So, after trying to come up with the idea on her own, Hall did what many college students do — asked her roommates for help.

“I was like, ‘You guys, you got to help me,’” Hall said. “I still have the notebook. I drew out a shirt and then we just started throwing out words.”

Hall said there are many different words that describe what it means to be a female athlete, but she ultimately decided on “Unbreakable.”

Hall said she wanted to create a brand that stood for toughness, determination, and perseverance. A brand that helped other female athletes power through some of the issues she says women in sports face.

“There’s just so many different factors that go into being a woman and then again, a woman in sport,” Hall said. “‘Unbreakable’ kind of comes from the idea that, regardless of the barriers that are placed in front of us, we can come out unbreakable.”

Shortly after making her first shirt on March 27, many of Hall’s teammates wanted one.

“The day I made the shirt, I probably had practice the next day,” Hall said. “I walked in and immediately the girls were like, ‘I love that idea,’ ‘That’s awesome,’ ‘That’s really cool,’ And I was like, ‘Okay, well if you guys want one, I’ll make it for you.’”

Although not official, Hall said “Unbreakable” presents itself as somewhat of a team motto.

“We’ve really tried to embody [“Unbreakable”],” Hall said. “So once I saw that ‘Hey, my teammates embody this idea,’ I was like, ‘Okay, well, let’s see if other teams or other girls want to embody it.’”
The production process
After the initial request from her teammates for roughly 60 shirts, Hall said she bought a vinyl printer and ordered black Walmart shirts in bulk.

Then, she printed out sheets of vinyl — with the words “Unbreakable Female Athlete” — cut them, peeled them, and applied them onto the shirts using a heat press she purchased.

Hall says the process for creating the shirts hasn’t changed much since the end of March, but the volume of production has increased quickly.

Hall’s brand is now offering other clothing items including hats, tank tops, hoodies, crewnecks, and shorts in a variety of colors.

Customers can also customize their items with words like mom, dad, and coach, so the item reads “Unbreakable Female Athlete Mom,” for example.

Athletes on the rowing team wore “Unbreakable Female Athlete” shirts while warming up for multiple races across the country this spring, and Hall says she’s had multiple athletes and teams who saw Hawkeye athletes wearing the shirts inquire about purchasing clothing.

On social media, Hall’s personal TikTok account has become one big ad for her brand. Her first TikTok post about “Unbreakable Female Athlete,” on May 2, acquired more than 50,000 views.
@jaeceehall Link in bio to order your unbreakable female athlete shirt!! Be PROUD to be a female athlete!!!!! Embrace it💪🏼 #fyp #foryou #foryoupage #athlete ♬ Unstoppable – Sia

“I love the idea of having a full team wear this brand and go around and empower others,” Hall said. “When you see a whole team who stands up and is empowered in themselves and believes in themselves and are confident enough to say, ‘We are unbreakable female athletes,’ that’s cool.”

While Hall still creates all the shirts herself, the process now includes an intricate Excel spreadsheet to keep track of the orders and journeys to UPS to ship the products from time to time.

Hall said she has sold approximately 300 items since she created the first shirt.

A link to purchase clothing can be found in all of Hall’s social media bios.
The goal
While Hall’s immediate objective is to grow awareness for her brand, her long-term vision includes much more than just clothes.

Hall, a psychology major, said she wants to use her voice now and in the future to speak about female athletics, empowerment, and mental health.

“I’d love to take it further,” Hall said. “Just past being a brand that sells clothes. I’d love to do panels of female student-athletes coming together and talking to high school kids, maybe younger, like kids growing up, and just talking about not only women empowerment, but what it means to be a female athlete and the different types of things that we have to go through.

“I’d love to use this as a future career,” Hall added. “Go and speak to different teams around the country, around the world. Different ages of all levels, and speak on women empowerment and mental health.”

But before Hall begins her future career as a public speaker, she’s spreading her message through apparel. And pretty soon, she might need to buy some more heat presses.