The sophomore All-American led the Hawkeyes in points, rebounds, and blocks in 2021-22. 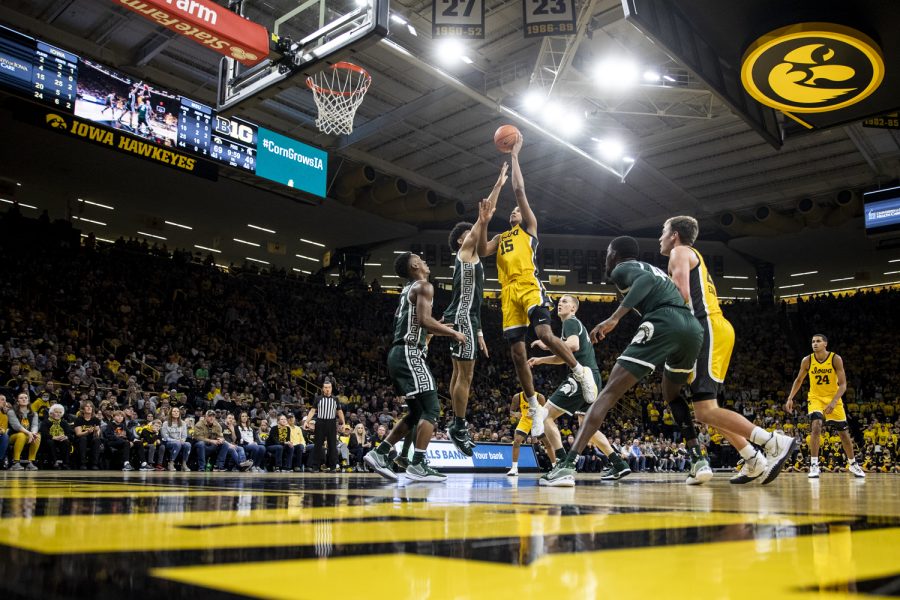 Iowa forward Keegan Murray fights through traffic for a score during a men’s basketball game at Carver-Hawkeye Arena between No. 25 Iowa and Michigan State on Tuesday, Feb. 22, 2022. Murray shot 10-of-15 for 28 points. The Hawkeyes defeated the Spartans, 86-60.

Earlier this month, The Daily Iowan sports staff voted to determine its 2021-22 best of the year awards. Among the titles up for grabs was “Male Athlete of the Year.” In this category, former Hawkeye basketball forward Keegan Murray bested former Iowa football center Tyler Linderbaum by a 5-1 vote.

Murray, who will likely be picked in the first few selections of Thursday’s NBA Draft, averaged 23.5 points and 8.7 rebounds per game in his sophomore season while leading Iowa to its first Big Ten Tournament title since 2006.

Murray played a huge part in one of the most successful years in Iowa men’s basketball history. The Hawkeyes tallied 26 wins, not only the most in the Fran McCaffrey era, but the highest total since 1987 when head coach Tom Davis led the Black and Gold to 30 victories.

Murray earned first-team All-America honors after he led the Hawkeyes in points, rebounds, blocks, field goal percentage, and 3-point percentage in his first year as a regular starter. He also broke the Iowa single-season scoring record with 822 points.

After a solid freshman season — playing in all 31 games and making four starts — Murray made a huge leap as a sophomore.

The Cedar Rapids product more than tripled his 2020-21 scoring output of seven points per game this past season. He also grabbed three more rebounds per game and upped his 3-point percentage by 10 percentage points.

Murray ranked fourth nationally in scoring and inside the top 40 in the country in both rebounds and 3-point percentage.

Murray was named the Big Ten Tournament’s most outstanding player, the Power Forward of the Year, and a finalist for the Wooden Award — given to the nation’s top player — just a year after former Iowa great Luka Garza won the award.

Murray became the second player in NCAA history to put up over 800 points, 60 blocks, and 60 3-pointers in a season, the other being Kevin Durant.

The All-Big Ten first-teamer is projected to be picked early in the first round of the NBA Draft Thursday by almost every major media outlet. If he is one of the first 10 players selected, he will join Chuck Darling, John Johnson, and Fred Brown as the only Hawkeyes drafted that high.

Murray will, in all likelihood, become the first first-round pick out of Iowa since Ricky Davis in 1998.

Garza and sharpshooter Joe Wieskamp were each taken in the second round of last year’s draft.