An Iowa City couple at Pride details their experiences of coming out, finding acceptance, and building a family. 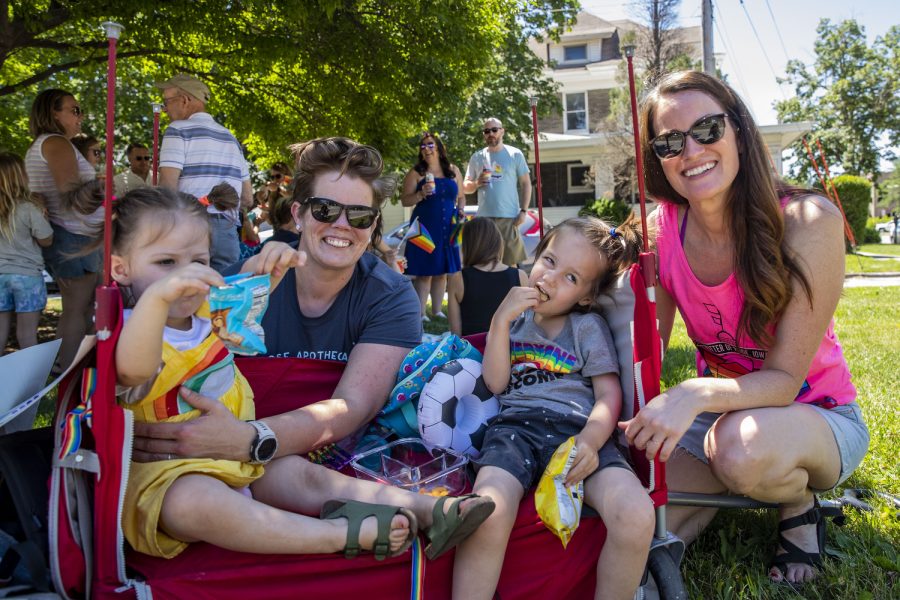 From left; Addie, Kate, Fitz, and Leslie Revaux pose for a protrait before the Iowa City Pride Parade in Iowa City on Saturday, June 18, 2022.

Through mutual friends and the LGBTQ community, Leslie and Kate Revaux found each other, grew with each other, and created a welcoming family full of joy, love, and openness.

Kate and Leslie knew each other for a while before pursuing a relationship in 2015. About two years later after their marriage in 2017, they had two children: Addie, 2, and Fitz, 3.

“They’re just a great queer family, like us,” Lauren Magnani, 39, said. Magnani and her wife, Tomeka, 32, are friends with the Revaux family and have a child the same age as Addie.

After leaving home that morning – a house they had just purchased in May – Leslie and Kate took their kids to Queer Storytime, an event consisting of book reading, dancing, song singing, and educating children on LGBTQ pride. LGBTQ Iowa Archives & Library hosted the storytime at the Close House in Iowa City.

Lauren Magnani said exposing their child, Eliana, to other ideas and people will help her be better equipped when dealing with those with different views or thoughts.

Magnani also said the ability to see a diverse group of people and families is very valuable to kids having an open mind and feeling accepted.

“It’s just really good because then they feel like they’re just as valid as any other person or family,” Magnani said.

After the educational storytime, the Revaux family observed the Iowa City Pride Parade that started at College Green Park and ended in downtown Iowa City.

Kate’s favorite thing about Leslie, her thoughtfulness, shined through during the parade as Leslie held onto candy given to her children, who threw each sucker toward her every time they received a new one.

Although Leslie is happily married to Kate now, she considers her coming out story a slow process. Her first relationship, which she said was very closeted, was at the age of 17 in 2001.

“I told my parents in 2003 and slowly added other people through the early 2000s,” Leslie said.

Kate came out at the age of 22 or 23, but knew she was queer for a very long time before that. She then moved to Iowa City and never left.

“[I] found myself a little more. And the community that was more accepting and more visible than in my hometown,” she said.

Through shared friends and shared connections, Leslie and Kate continue to make Iowa City their home and educate their children on different types of people to raise the two and three-year-old to become welcoming and open people.

“I think it’s just really important for our kids to be able to see families that reflect ours and kind of the unique challenges that might come with that,” Kate said.