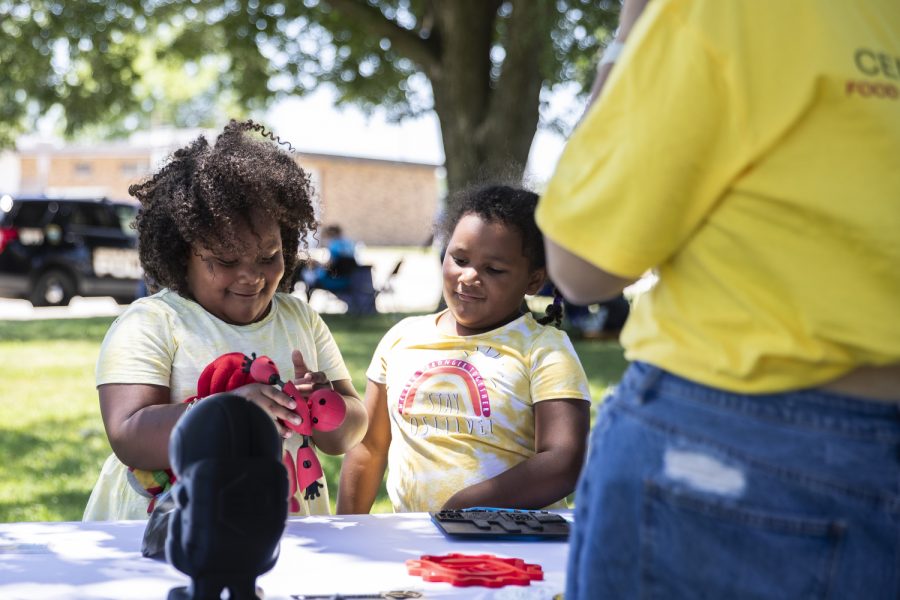 Jaunita, left, and Elizabeth Thomas, right, check out a stand during ‘Juneteenth in our Neighborhood’ for a Juneteenth celebration in Iowa City on Saturday, June 18, 2022. Iowa City community members celebrated with music, games, vendors, and a fashion show.

Johnson County Juneteenth celebrations continued into Saturday with both Iowa City and Coralville hosting events to mark the occasion.

Vendors, community members, and local officials all turned up to the events to show their support.

The Iowa City celebration featured a speech from Mayor Bruce Teague in which he announced that starting this year, Juneteenth will be an official Iowa City holiday, just one year after gaining federal holiday status.

“Juneteenth is a special day that really does mark that opportunity for all within the nation to be free, and specifically for African Americans,” Teague said in an interview with The Daily Iowan.

Teague encourages people to take time during the extended weekend to think about what it means for all Americans to be free.

Tracy Sargeant, executive director of the Multicultural Development Center of Iowa and organizer of the Iowa City celebration, said events like this have the ability to bring people together, but the community is still fragmented.

Sargeant said while the increased recognition for Juneteenth in recent years has been nice, he’s not completely convinced that everyone participating in the fanfare is doing so for the right reasons, and that some are more preoccupied with optics than change.

He said while the holiday is meant for everyone to celebrate, he worries that when Black people aren’t at the forefront, the messaging can get diluted, and the focus of supporting Black people can get lost. Because of this, Sargeant hopes to get more people of color engaged in the planning of similar events in the future.

Sergeant said he’s happy with the number of vendors and community partners who attended the event and hopes the turnout will be even greater next year.

Nikesha Jones-Jenkins, organizer of the Coralville festivities, said she feels it helps to start a dialogue, allowing people from different backgrounds to understand each other better.

Jones-Jenkins, who is originally from Arkansas, said she’s happy that Juneteenth, which historically has been mainly celebrated in the south, has made its way north in recent years.

Both events, especially Iowa City’s, were stocked with vendor stands and different businesses showing their support.

Ashley Clemens, a GreenState Credit Union employee who was also on the event’s planning committee, said the idea to bring financial literacy resources to the event came from wanting to share her knowledge with others in her community.

“Within the black community, financial literacy is not talked about much,” Clemens said. “So I figured that because I work in a financial institution, the knowledge I have can be given to someone else.”

Along with community members and local businesses, the Iowa City celebration also featured a set from The Wilted, a local band that has been together for a year now.

Maiya Kauffman, lead singer of The Wilted, said the event is a step in the right direction.

“There’s definitely a lot of stuff we can do as a community to keep growing and doing more, but this is definitely the right way,” Kauffman said.