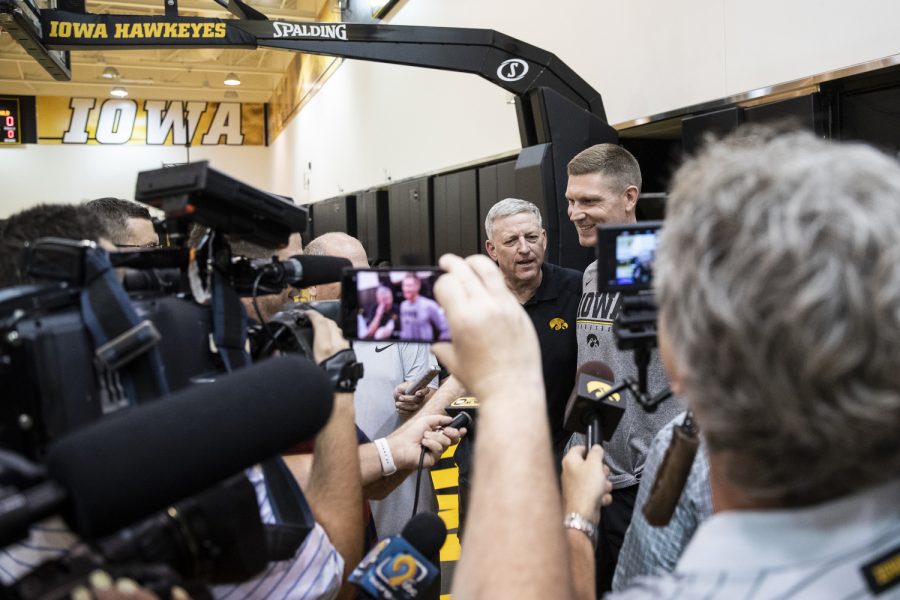 Former Iowa assistant coach Kirk Speraw jokes with newly introduced assistant coach Matt Gatens during an Iowa men’s basketball practice at Carver-Hawkeye Arena on Wednesday, June 15, 2022. Gatens filled the role Speraw’s retirement left open. During the interviews, reporters asked if Gatens would play a similar role to Speraw in working with shooters. “…naturally shooting is something that I kind of go to but I'm not gonna sit here and say I'm gonna try to replace whatever you know, Coach Speraw and what he did,” Gatens said. “But yeah, I like to enjoy helping guys get out there shooting. All parts of the game.” Gatens played collegiate basketball for the Hawkeyes and most recently coached for the Drake Bulldogs in Des Moines.

Gatens, replacing recently retired assistant coach Kirk Speraw, discussed the moment he found out he would be coaching for the team he played his collegiate basketball years with.

“I remember when he called and told me,” Gatens said. “I think I was mowing the lawn and I think I didn’t go in right away to tell my wife and I think I looked back out, most of my lines were all over the place. My head was just like running like I’m gonna get this done but my head somewhere else so yeah…”

Gatens is one of the two coaching changes the Hawkeyes have made in the past few months. On April 25, the Hawkeyes promoted former video coordinator and director of recruiting Courtney Eldridge to fill another assistant coach role.