A march for gun control was organized and led by a group of local students who have just graduated middle school. The protest comes less than a month after the Uvalde school shooting. 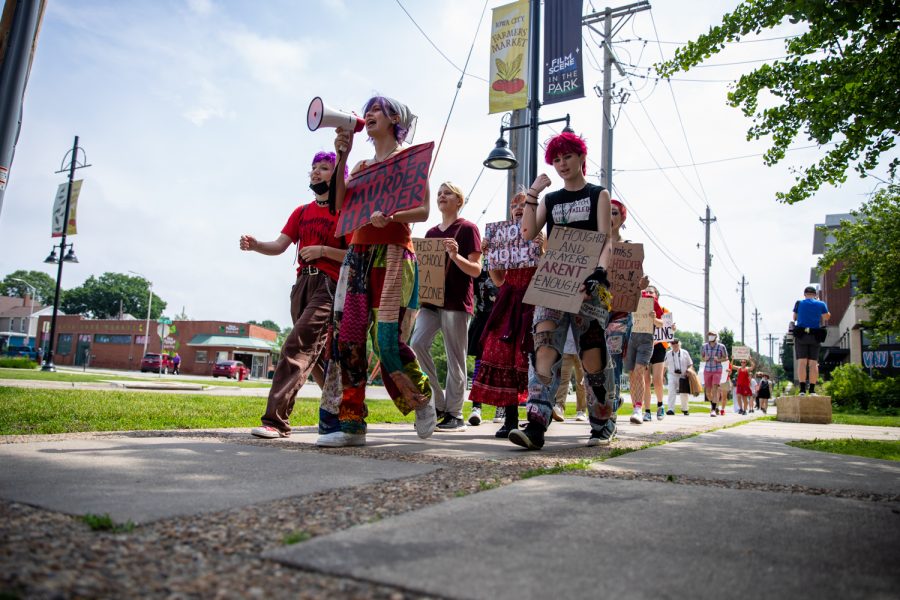 Protestors chant while marching from College Green Park to the University of Iowa Pentacrest during a protest against gun violence on Monday, June 13, 2022. Around 20 people attended the demonstration.

A group of middle school friends organized a gun control march that caught the attention of local politicians.

The protest comes less than a month after the Uvalde, Texas, school shooting that resulted in the deaths of over twenty people.

“Why the hell am I and a bunch of other kids fresh out of middle school up on this stage right now?” Eli Bolander, an ICCSD student, said. “It’s because we’re angry and you should be too. Almost every single day that I’ve been in school this year I’ve wondered if today is my last.”

Protesters gathered at College Green Park during the late hours of the morning. After 11 a.m., the protestors marched through downtown Iowa City where they stopped to gather in front of the University of Iowa Pentacrest.

The protest was made up of over two dozen people, most of them being the teenagers who had organized the protest.

Bolander says that for as long as he can remember, he has feared school shootings, but he only got into political activism a few months earlier.

“Since the fifth grade I have had countless plans of what I would ever do if I was in a school shooting,” Zee Lauer, a 14-year-old student, said at the protest. “I’m going to City High next year and one of the first things I’m going to do is memorize the school and make another plan. I should not have to worry about these things. I should not be predicting my death.”

Lauer spoke at the protest, calling out the government’s perceived unwillingness to protect its citizens from gun violence.

“What’s more important, the lives of children and other people, or guns?” Bolander said.

Lauer brought up the mass shooting in Las Vegas in 2017 where the shooter had legally bought 47 firearms.

“There was a lot of talk this year at the Iowa legislature about books,” Janice Weiner, the Democratic nominee for Iowa’s senate district 45, said. “I don’t know of a single book that’s ever killed anyone, but guns kill people every day.”

Jon Green, a member of the Johnson County board of supervisors who attended the protest, said the board is working on an intervention initiative to prevent gun violence in the county.

“We haven’t sketched out exactly what that looks like yet, but we’re going to be following best practices,” Green said. “One life saved is a triumph.”

Green graduated high school in 2001, just two years after the Columbine shooting in 1999. He said the active shooting drills are traumatizing a generation of students, and the only way to make change is to take it up with legislation.

“It’s good for all of the organizers and participants to stand in solidarity with one another to remind ourselves [of] important work that remains to be done,” Green said.

Weiner said because modern bullets were not invented when the 2nd Amendment was written, she does not consider bullets to be protected under the Constitution.

A bipartisan gun deal was announced on Sunday with the support of 10 Republican senators.

“As we work toward improving safety, it’s important that we safeguard rights enshrined in the Constitution and Bill of Rights,” Grassley wrote in a statement. “I need to see legislative text, which has yet to be written, before making a final decision on how I’d vote.”

Grassley has an “A+” rating from the NRA, and has been endorsed by them.

Bolander said he is glad about seeing local politicians like Green, Weiner, and Elinor Levin, the Democratic nominee for district 89, at the protest to show their support for the cause.