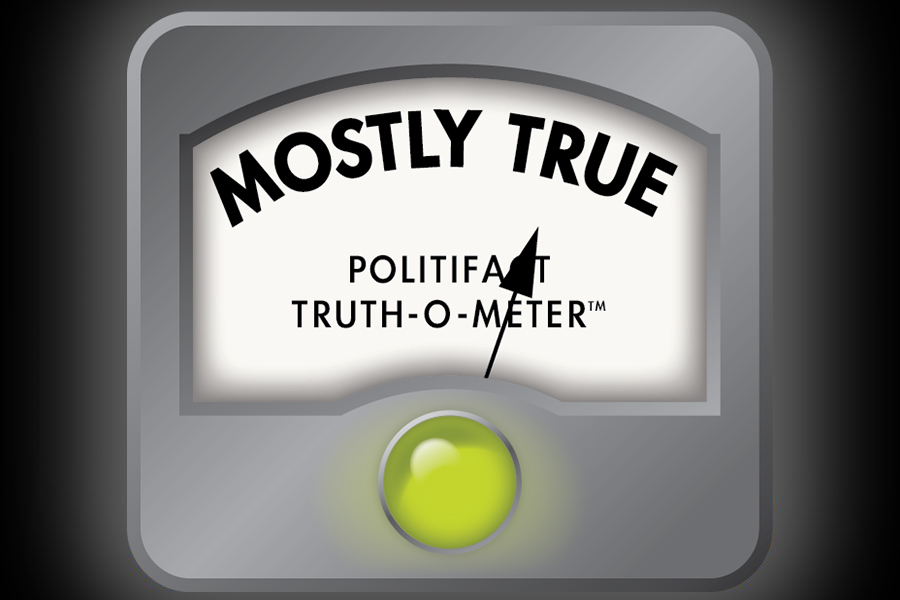 Lamenting laws like the one cutting the amount of time Iowans are eligible for state unemployment benefits and forcing unemployed people to accept lower paying jobs after a specific period of time while drawing unemployment, he wrote this in an end-of-session newsletter:

“There are fewer Iowans working today than when Gov. Reynolds took office, even as the U.S. has added more than 10 million new jobs.”

Iowa’s most recent numbers support Wahl’s claim about fewer workers, by the thin margin of about 200 workers that could fall within a margin of error. Current preliminary Iowa Workforce Development data show that 1,646,800 Iowans had jobs in April, the most recent month for which data existed when he made the comment. That compares with 1,647,000 working in May 2017, when Reynolds became governor.

But the survey operates with a margin of error. The unemployment rate at a 90% level of confidence for April is between 2.5% to 3.5%, for example, the Bureau of Labor Statistics reported. Updated numbers that include May are scheduled to be released June 16, 2022.

How close the April data are to the most accurate reflection of actual jobs in the state won’t be known for a while. Jobs data – which come from a nationwide U.S. Bureau of Labor Statistics survey of employment, hours worked, and earnings – are recalculated in the following month when more data are known. They are recalculated again at the end of a year when the state’s unemployment insurance data and other factors are figured into the jobs count, the bureau says in its frequently asked questions summary.

Moreover, data for the previous five years are recalculated when more factors are known, the bureau states. Updated data are released each March.

Reynolds became governor in 2017 to finish a term by Terry Branstad, who was appointed the U.S. ambassador to China by former President Donald Trump. She was elected in 2018 and faces re-election this year, thus Wahls’ jab at the governor, who touts a pro-business record that includes getting a fixed state income tax for individuals and businesses, international trade efforts, and less business regulation.

Wahls’ and other Democrats’ goal is to show Reynolds’ performance in a negative light but several other factors go into growing jobs. They include trends affecting a state’s large industries, such as inflation and buyers’ habits; business owner preferences on where to locate; competition at the interstate level and globally; available transportation; and economic pressures such as those provided by recessions.

Starting in March 2020, the coronavirus pandemic also played a role in the number of jobs as businesses closed and workers were laid off. For example, non-farm employment in Iowa was down in April by an estimated 1.1% – or 18,000 workers – since March 2020, state jobs numbers show.

Mike Maciag, a former staff writer for Governing magazine, wrote for the publication in 2017 that several factors affect jobs creation more than what governors do. Five years later, he hasn’t changed his mind, he wrote to PolitiFact Iowa in an email.

“Governors certainly play a role in job creation, but their influence on a state’s overall net change in jobs is relatively minimal in the short term,” Maciag, now an analyst with the Pew Charitable Trusts, wrote. “Most of what drives job growth or losses, particularly business cycles, is far beyond their control. If their policies do spur job growth, much of the gains generally won’t be realized until after they leave office.

“One area where governors can have a more immediate effect is the public sector. This might include allocating additional funding for state employee staff or pay, along with budget increases for schools and other units of government relying on state support.”

The National Governors Association, consisting of both Republican and Democrat governors, issued a report in 2019 that said governors can better connect workers to good jobs in their states by bringing schools and businesses together, increasing learning opportunities for mid-career workers, and spending money on digital and workforce development efforts in rural areas.

Different kinds of data exist to show what is happening in the jobs market. The state’s labor pool data show how many people in Iowa work or are available for work. Another measure, for seasonally adjusted non-farm employment, shows how many jobs exist in the state.

Non-farm employment comes from regular surveys of how many jobs Iowa employers have filled in the state, regardless of where the workers live. For example, a worker along Iowa’s border with another state – the Mississippi River in the Quad Cities, for example – could live in Illinois and show up in non-farm job data in Iowa but not data showing how many Iowans have jobs.

While Iowa has been adding jobs in that 12-month period starting in April 2021, its 2.4% growth rate during that time for non-farm employment ranked 43rd among the 50 U.S. states, the Arizona State University’s Seidman Research Institute reports. The institute is a consulting enterprise at the university’s W.P. Carey School of Business that Wahls cited when PolitiFact Iowa asked him to back his claim about jobs creation.

A new national jobs report was issued June 3. The Bureau of Labor Statistics report showed that non-farm employment grew nationally by 390,000 people in May 2022. The Iowa numbers are to be reported later in June.

Iowa’s top Democrat in the state Senate says fewer Iowans have jobs now than when the Republican governor took office in May 2017. The numbers back this up, at least until they can be verified better. Additionally, Wahl’s point about a slow jobs creation rate for Iowa gets an assist from rankings that show the state 43rd for jobs growth among the 50 U.S. states in April this year.

But numbers based on survey estimates that will be adjusted when more data are known leave open possibilities that the 200-jobs margin reflected now could change, downward but also upward. That uncertainty, combined with current reports showing slow jobs creation when compared with other states, leads us to rate the statement about Iowa losing jobs during Reynolds’ time in office to be Mostly True.

Seidman Research Institute, Arizona State University, “Job Growth by State” and “About Us”

Federal Reserve Bank of San Francisco, “Why does the Federal Reserve consider nonfarm payroll employment to be an important economic indicator?” June 2004

Governing.com, “How Many Jobs Can Governors Take Credit for Creating?,” Mike Maciag, Feb. 13, 2017

Daily Yonder, “People On the Land: The Role of Government in Job Creation,” by Timothy Collins, Nov. 17, 2016

Business Insider, “People didn’t rush back to work when their unemployment benefits were cut early, a new study finds, despite what some GOP governors predicted,” by Anna Cooban and Juliana Kaplan Jul 23, 2021

PolitiFact, “Fact-checking Joe Biden’s State of the Union claim on scale of job gains in 2021,” by Louis Jacobson, March 1, 2022