Mazur was named conference pitcher of the year and Anthony collected freshman of the year. 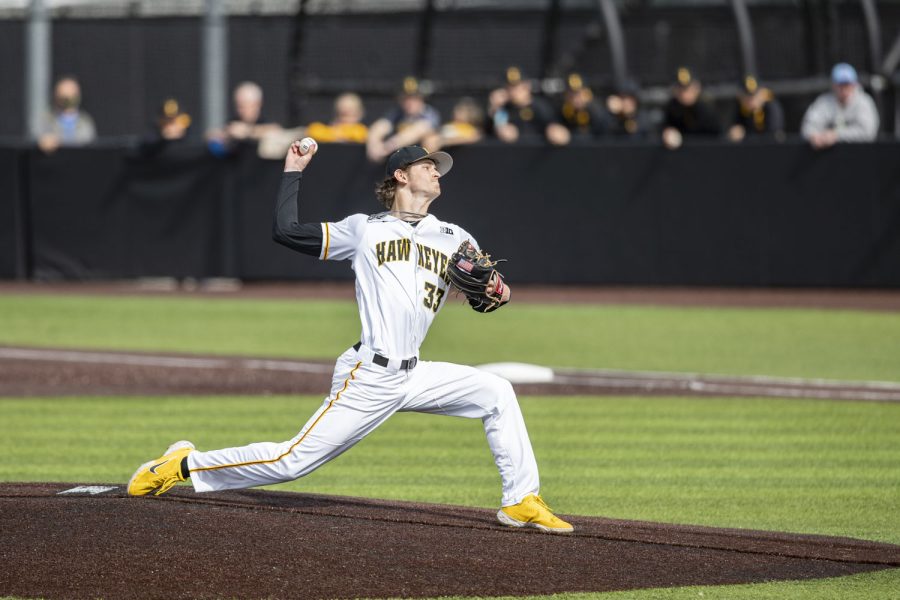 Iowa pitcher Adam Mazur throws the ball during a baseball game between Iowa and Purdue at Duane Banks Field in Iowa City on Friday, May 6, 2022. The Hawkeyes defeated the Boilermakers 5-2.

Iowa baseball players Adam Mazur and Keaton Anthony were honored as Big Ten Pitcher of the Year and Big Ten Freshman of the Year, respectively, the conference announced Tuesday.

Mazur is the second consecutive Iowa pitcher to receive the honor after Trenton Wallace in 2021. Anthony is the second Hawkeye to earn Big Ten Freshman of the Year after C.J. Thielke did so in 1994.

Mazur was named to the All-Big Ten first team while Anthony nabbed second-team recognition. Anthony was also named to the all-freshmen team.

In his first season in Iowa City, after transferring from South Dakota State, Mazur made 14 starts on the mound, compiled a 7-2 record, and pitched to a 3.05 ERA.

Mazur tossed 88 ⅔ innings, the second-most in the conference, including one complete game.

During the Big Ten slate, the Iowa ace made eight starts, threw 55 ⅔ innings, collected five wins, and pitched to a 2.59 ERA.

He was second in the Big Ten in starts against conference foes and led the conference in each of those other categories.

Anthony batted .360 in his first college season, first among conference freshmen and seventh in the Big Ten. He was also third in the Big Ten with 20 doubles.

Mazur and Anthony weren’t the only Hawkeyes to be recognized by the Big Ten on Tuesday.

Williams was an anchor in the Hawkeyes’ lineup all season, starting all but one game in the regular season.

Williams batted .356 and ended the regular season with a .654 slugging percentage. Those marks were good for eighth and sixth in the conference.

Beutel’s 1.33 ERA this season was the best of his college career by more than four runs and was nine runs lower than his 2021 mark.

In his first two seasons at Iowa, Beutel pitched a combined 15 innings and gave up 18 earned runs.

This year, he allowed just four earned runs in 27 innings.

Brecht, Iowa’s hardest-throwing hurler, pitched to a 2.42 ERA out of the bullpen this season. The righty, who regularly put up triple-digit numbers on the radar gun, fanned 44 of the 108 batters he faced in 22 ⅓ innings of work this season.

After its three-game sweep of Indiana last weekend at home, Iowa will enter this week’s Big Ten Tournament as the No. 3 seed. The Hawkeyes will take on No. 6 Penn State in the first round on  Wednesday at 5 p.m. on Big Ten Network.