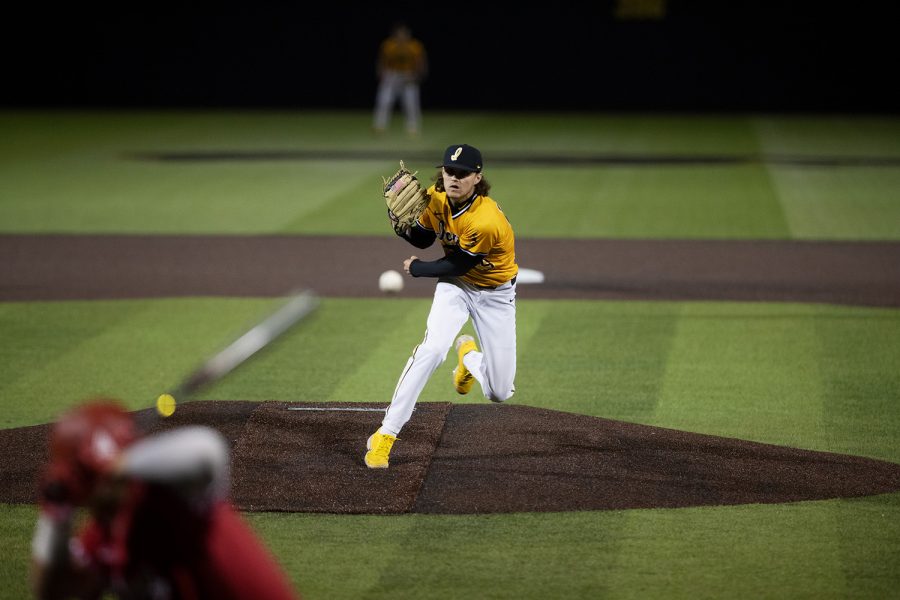 Iowa pitcher Beutel pitches the ball during a baseball game at Duane Banks Field in Iowa City on Saturday, May 21, 2022. The Iowa Hawkeyes defeated the Indiana Hoosiers, 2-1. Beutel pitched two innings and received his fourth save of the season.

The Iowa Hawkeye baseball team defeated the Indiana Hoosiers, 2-1, during the final game of the regular season at Duane Banks Field on Saturday. Iowa finished off the regular season with a 33-17 overall record and a 17-7 Big Ten record. Iowa has also clinched the No. 3 seed in the Big Ten Tournament.

Iowa Pitcher Ty Langenberg received his fifth win of the season after pitching five innings and recorded four strikeouts. Iowa outfielder Keaton Anthony hit a solo home run in the bottom of the first inning. Iowa outfielder scored a run on a wild pitched in the fifth inning. Iowa Pitcher Ben Beutel pitched the last two innings of the game and earned the save after escaping the ninth inning with the bases loaded.

Despite having eight hits, Indiana could only muster up one run. Indiana Catcher Matthew Ellis hit a solo home run off of Iowa pitcher Connor Schultz in the top of the sixth inning. Indiana will end their season with an overall record of 25-30 and 10-14 in Big Ten play.

With the regular season coming to a close, Iowa will head to Charles Schwab field in Omaha, Neb. to play in the Big Ten tournament. Iowa will play against the sixth-seeded Penn State Nittany Lions on Wednesday, May 25 at 9 am.