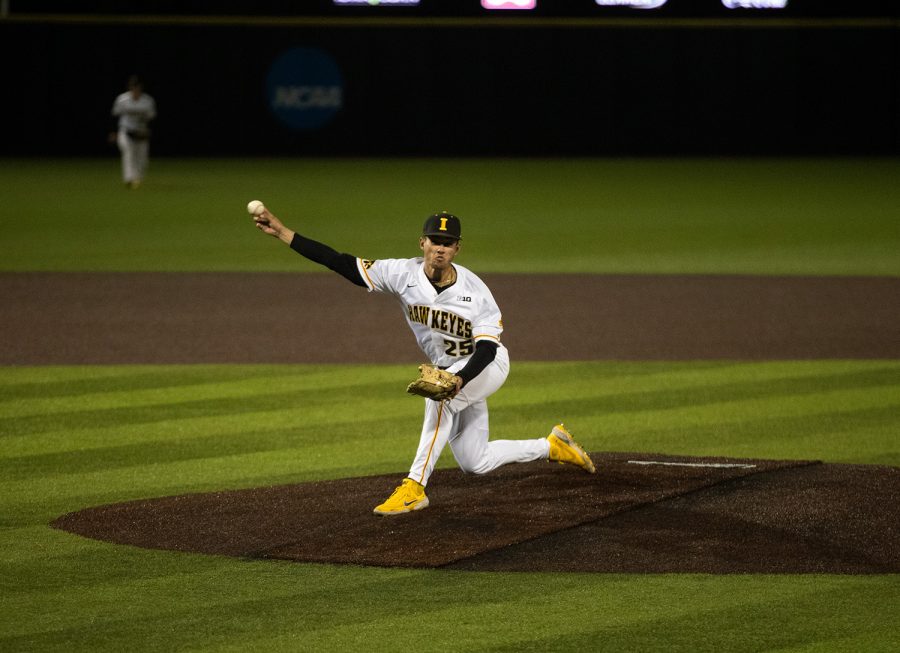 Iowa pitcher Dylan Nedved throws the ball during a game between Iowa and Minnesota at Duane Banks Field in Iowa City on Friday, April 15, 2022. The Hawkeyes defeated the Golden Gophers, 9-3. Nedved had two strikeouts and allowed one hit.

The senior from Shawnee, Kansas, struck out six batters and didn’t yield a hit until the first out of the sixth inning for his sixth win of the season.

“My attitude is just as soon as I get the ball in my hands, I’m going to be the same person,” Nedved said. “Get outs and give my team the best chance to win, so it doesn’t change whenever I get the ball.”

“I thought it was a really good matchup for him if he had good stuff,” Heller said.

Nedved has mainly been used a long reliever in 2022, throwing three or more innings out of the bullpen eight times. Before Friday, he started four games and allowed at least one earned run in each outing.

Nedved replaced Connor Schultz in the rotation this weekend. Shultz has failed to pitch three innings in each of his last three starts.

The Hawkeyes inserted a new pitcher in each of the late innings. Jared Simpson surrendered one hit in the seventh inning and escaped the frame after 14 pitches.

Luke Llewellyn forced himself into a jam in the eighth inning as there were Hoosiers on first and third bases, but he struck out a batter for the third out. Will Christophersen retired Indiana in order on 11 pitches to end the night.

“I just thought we put together a really well-played game,” Heller said. “Really professional effort by the guys who showed up focused and locked in.”

The Hawkeyes have taken seven of eight Big Ten series this season.

At 32-17 overall and 16-7 in the Big Ten, the Hawkeyes are tied for second place in the conference with Rutgers and Illinois.

Iowa can enter the Big Ten Tournament no higher than the No. 2 seed or lower than the No. 4 seed. The tournament starts Wednesday and features the conference’s top eight teams in a double-elimination bracket.

Strong night for Seegers and Hojnar

Hawkeye shortstop Michael Seegers went 4-for-5 at the plate and compiled four RBIs. All his RBIs came from singles in the fourth, seventh, and eighth innings.

As Iowa’s leadoff hitter, the sophomore from Oconomowoc, Wisconsin, is hitting .284.

“I feel really comfortable there,” Seegers said. “Just trying to see some pitches for everyone else so they can get a look at the pitcher and then just get on for everyone.”

Iowa’s regular season finale will start at 8:02 p.m. on Saturday, and the contest will air on ESPNU. The Hawkeyes will host a senior day ceremony before the game.