The sophomore center fielder registered a Big Ten-record 12 RBIs in the Hawkeyes’ 30-16 victory over the Hoosiers on Thursday night. 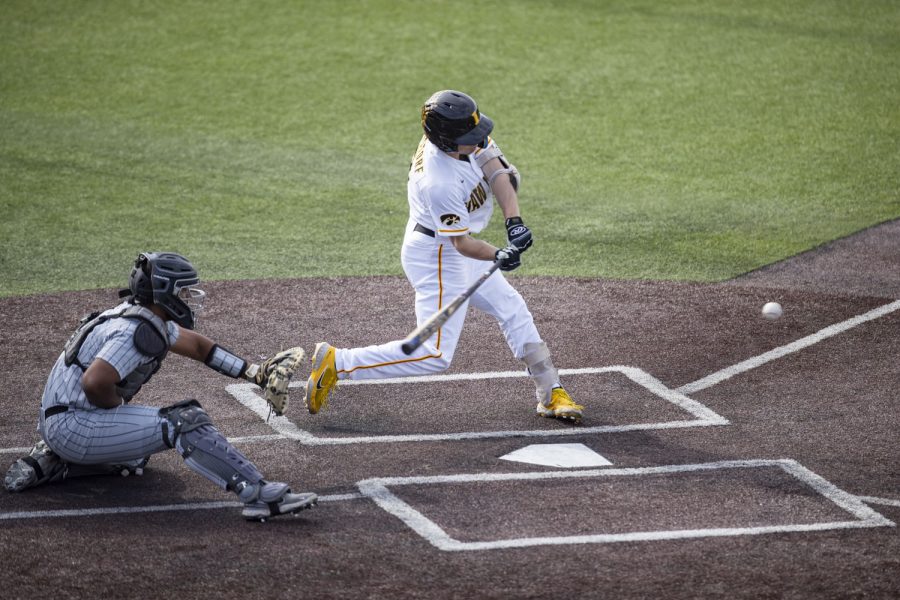 Iowa centerfielder Kyle Huckstorf prepares to hit the ball during a baseball game between Iowa and Purdue at Duane Banks Field in Iowa City on Friday, May 6, 2022. Huckstorf had four at bats and one strikeout. The Hawkeyes defeated the Boilermakers, 5-2.

Iowa baseball center fielder Kyle Huckstorf approaches the ballpark every day with the same mindset: hit the baseball hard while barreling up on his bat.

He accomplished that goal in a historic fashion on Thursday night. The sophomore recorded three home runs, six hits, and 12 RBIs to propel the Hawkeyes to a 30-16 over Indiana after they were down 11 runs at Duane Banks Field.

Huckstorf’s 12 RBIs were a single-game record for an individual batter.  His performance led the Hawkeyes to a program-record 30 runs in a Big Ten contest.

“This is going to be the day I take with me until I die,” Huckstorf said postgame. “It will be stories that live on forever, and I’ll have fun with it.”

The No. 9 hitter’s performance happened after the Hawkeyes were hammered at the beginning of the game. Iowa ace Adam Mazur pitched just two innings, allowing nine earned runs.

At the end of the third inning, the Hawkeyes trailed, 13-2.

The tide shifted in the fourth frame as the Hawkeyes began a 28-3 run.

Iowa totaled 10 runs in the bottom of the fourth and retook the lead on a Huckstorf grand slam in the fifth inning. The Hawkeyes scored multiple runs in every inning starting in the fourth frame.

“You don’t see many like that, but that’s why you keep playing,” Iowa head coach Rick Heller said. “We knew they were in a good place offensively and then with the hot weather and wind blowing out, it was going to be a challenge for us, and they had a really good plan on Mazur and jumped on us fast.

“… We talked as a group after the first inning, like, ‘Hey, listen, Mazur has picked us up a good chunk of the season, today’s the day the offense needs to pick him up and just keep fighting and just keep battling, grinding at-bats out, we can score some runs tonight too.’”

Iowa has two games left against Indiana before the Big Ten Tournament begins next week, and Thursday’s win helped Iowa in the conference standings and RPI.

Iowa is tied for third place in the conference standings with Illinois. The Hawkeyes lose the tiebreaker with the Illini, however, because Illinois won two of three games in April.

Iowa’s Duncan Davitt threw the final 4.1 innings and was named the contest’s winning pitcher. The junior helped slow the bleeding for the Hawkeyes as he forfeited just two earned runs and four hits.

By tossing almost half the game, Davitt rested some bullpen arms that could be used on Friday and Saturday.

The Hoosiers and the Hawkeyes will face off at 6:05 p.m. on Friday. The Hawkeyes are expected to start pitcher Dylan Nedved, who is 5-3 with a 3.9 ERA.

Iowa’s 1972 College World Series team will be honored before the game, and fireworks are scheduled for postgame.