The Hawkeyes concluded the conference championships with 103 team points — 21 behind the first-place Ohio State Buckeyes. 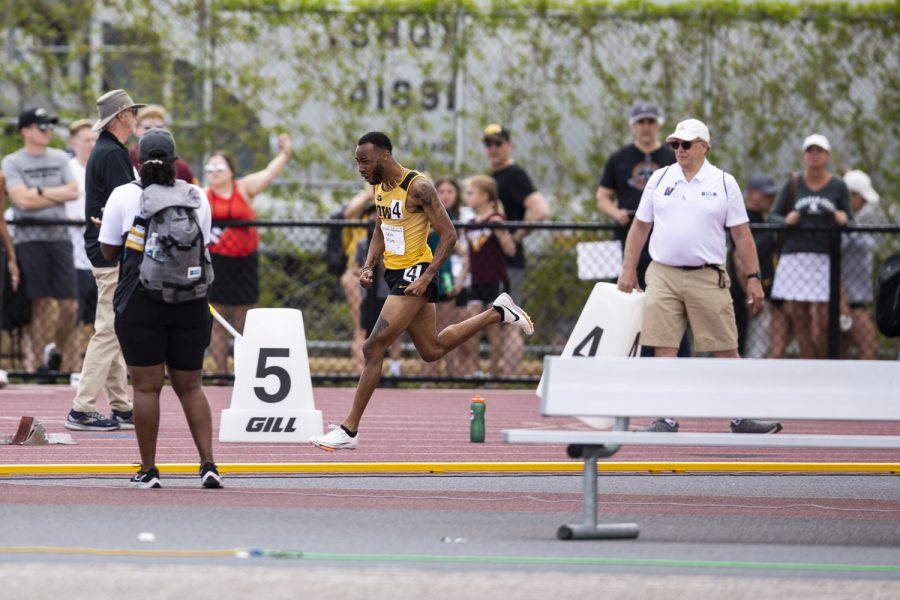 Iowa’s Julien Gillum celebrates after winning the men’s 400-meter hurdle final during day three of the 2022 Big Ten Outdoor Track and Field Championships at the University of Minnesota Track and Field Stadium in Minneapolis on Sunday, May 15, 2022. Gillum, one of four Hawkeyes in the event, recorded a time of 51.12 seconds.

MINNEAPOLIS — The Iowa men’s track and field team placed second at the 2022 Big Ten Championships over the weekend. A gold-medal finish from junior Julien Gillum in the 400-meter hurdles pushed the Hawkeyes to their runner-up finish.

Gillum was the only individual champion on the Iowa men’s team, posting a 51.12-second time in the 400-meter hurdles.

Gillum came from behind to beat Maryland’s Caleb Dean by 15 hundredths of a second.

“Having Julien come out and win his first individual Big Ten title is awesome,” Iowa director of track and field Joey Woody said Sunday. “He just needed to be in contention and he was coming into the straightaway. I think he smelled a little bit of blood at the end and he went for it right there at the finish line.”

Gillum and Jefferson were the only Hawkeye men to earn top-three individual finishes Sunday.

The runner-up performance continued a streak of top-two finishes at both the Big Ten Indoor and Outdoor Championships for the Iowa men’s team. The run dates back to the 2019 outdoor championships.

This spring, Iowa continued that streak without three of its top athletes. Sophomores Jenoah McKiver and Kalen Walker and junior Wayne Lawrence Jr. all missed this weekend’s outdoor championships.

Woody said he was proud of the way multiple underclassmen stepped up in their absence.

“Obviously, you’ve gotta recruit the right guys,” Woody said. “They expect to win. Us getting second is just a bad taste in our mouth. They learn it early, just look at the freshmen that are sophomores this year. They got that taste of success in their mouths last year and so they just want it bad, and they’re doing everything possible to help the team be successful because that’s what we’re all about.

“When you surround yourself with other athletes like that, that’s what helps build a program from the youth up. Those guys are going to have a bad taste in their mouth after this, and they’re going to be very excited to get back at it.”

Select athletes from the Hawkeye men’s and women’s teams will compete at the NCAA West Prelims in Fayetteville, Arkansas, from May 25-28 for a chance to head to the NCAA Championships in early June.